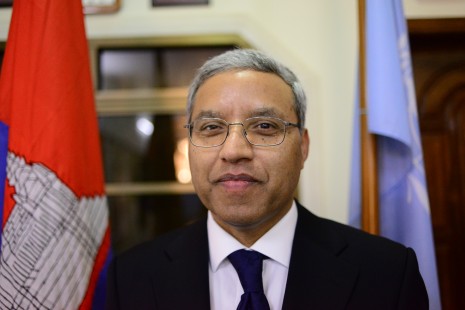 Subedi Calls for Accountability in Meeting With Hun Sen

In a meeting with Prime Minister Hun Sen and 10 of the government’s highest-ranking officials in Phnom Penh on Wednesday, U.N. human rights envoy Surya Subedi called for the perpetrators of recent state-sanctioned killings to be held accountable for their actions.

Mr. Subedi’s concerns during what he described as a “candid and cordial meeting” included, but were not limited to, authorities’ use of firearms to quell protests—there have been seven fatal shootings at protests since September, but no arrests—as well as the suspension of the constitutional right to freedom of assembly and the imprisonment of 23 garment workers, union leaders and activists before trial.

During an interview after his meeting Wednesday afternoon, Mr. Subedi said that he had asked Mr. Hun Sen and the other government officials to consider three aspects of international and national law: the necessity of having used firearms during the recent protests, whether their response was proportionate to the threat and if the government’s action was lawful.

“[Mr. Hun Sen’s] response was that the government has to maintain law and order, to protect people’s lives and property,” Mr. Subedi said.

“But they seem to have set up a committee to investigate the incident, and I’ve asked them to make it a more comprehensive investigation so that we get to the bottom of the truth.

“And I also asked that the perpetrators—those responsible for giving orders and carrying out orders—should be brought to justice.”

Mr. Subedi said that he found the mass protests that filled Phnom Penh’s streets at the end of 2013 “rather encouraging,” because “the protesters themselves were disciplined, the government did not interfere, the space for freedom of expression was widening, people were exercising freedom of assembly.”

But that all changed when, on January 3, military police opened fire on striking garment workers in Pur Senchey district’s Veng Sreng Street, killing five and wounding more than 40.

“That made me very sad,” Mr. Subedi said.

In September, Mr. Subedi told the Human Rights Council in Geneva that Cambodia was then at a crossroads, and authorities would have to choose whether to continue using “old tactics” to crack down on protesters or take a more democratic approach.

Cambodia is at a more crucial crossroads today, he said, and the urgency for reform is greater than ever because of the post-election political stalemate.

“Until a serious practice of reform is implemented, the country will not return to normalcy,” he said.

He also separately met with union leaders Wednesday, who spoke to him about their concerns over threats to activists.

“We asked Mr. Subedi to ask the government to find the people who shot the workers,” said Ath Thorn, president of the Coalition of Cambodian Apparel Workers’ Democratic Union.

Mr. Subedi’s request for the release on bail of 23 detained activists—some of whose families he has met with—was effectively shot down Wednesday, with Mr. Hun Sen saying that he is not in a position to interfere with the court system.

However, the U.N. envoy said Mr. Hun Sen was “more receptive this time than in the past” and “also went into some length to explain his position and his response to my concerns.”

“My work is having real impact now,” Mr. Subedi said.

“For instance, today, the Prime Minister assured me that they will carry out a comprehensive reform of the electoral system and the basis of it will be my recommendations in my reports.

“The Prime Minister was also more categorical today in assuring me that the judicial reform, the enactment of three core laws, will be based on my recommendations.”

Mr. Subedi has suggested in previous reports to the U.N.’s Human Rights Council about the situation in Cambodia that reforms of the National Election Committee, voter registration and the voter list are necessary to ensure voter confidence, as well as the passing of laws on the selection of judges, organization of the judiciary and reform of the Supreme Council of Magistracy.

Mr. Subedi said he also told Mr. Hun Sen that he believed the country could afford to meet workers’ demands for a minimum wage of $160 per month—something Mr. Hun Sen on Tuesday publicly dismissed.

While Mr. Subedi has met with Mr. Hun Sen before, there have been indications in the past that the U.N. envoy’s views were not particularly welcome. The prime minister in 2012 referred to one of Mr. Subedi’s reports as “flimsy.”

Last year, during his ninth mission, a small group of students led by a CPP Youth member hijacked a talk he was giving at a university in Phnom Penh, holding up signs calling for him to end his work monitoring human rights in the country.

Overall, it appeared Wednesday that the once frosty relationship between the government and the U.N. envoy had thawed—something not enjoyed by Mr. Subedi’s embattled predecessors Yash Ghai and Peter Leuprecht, both of whom resigned after repeated personal attacks from Mr. Hun Sen and other members of the ruling CPP.

“My relationship is more or less back on track,” Mr. Subedi said Wednesday.

He said Mr. Hun Sen gave him assurances for the establishment of a “truly independent national human rights institution,” which is the focus of his current, 10th mission to the country.

In a press conference after Mr. Subedi’s meeting with Mr. Hun Sen, Mr. Yentieng, who is responsible for the government’s human rights committee, told reporters that “the government will cooperate with NGOs and NGOs who write the draft law” on the creation of an independent human rights monitoring body.

“Samdech Hun Sen told him about the results of current reforms. Reform about the court, especially in the first part of the year,” Mr. Yentieng said.

He also said that three judicial draft laws would soon be sent for discussion to the Council of Ministers before being sent on to the National Assembly, which currently comprises only 68 CPP lawmakers because 55 CNRP lawmakers-elect are staging a boycott over the disputed election results.

Commenting on the ongoing political stalemate, Mr. Yentieng said Mr. Hun Sen “has opened the gate to negotiate, and we are working hard to make the situation stable.”

“Samdech asked Surya Subedi to tell the Cambodia National Rescue Party to enter the National Assembly to solve the problems with each other.”

Mr. Subedi will deliver a public statement about his visit Thursday.