Home News Students Bask in the Glow of Achievement

The sun was hot, but the grass was soft and green, and it was a pleasant Thursday to bask in warm praise from Phnom Penh Gov­ernor Chea Sophara.

“Today is a happy day for us,” said Doeuk Vannarith, a 16-year-old student from Wat Koh High School and one of more than 2,000 high-achieving students honored by the city government.

“I never dreamed that I would have the chance to sit in front of the governor with his full support. I promise I will keep learning hard, even after I reach the university,” he said.

Touch Sreyda, 18, attends Bak Turk High School and, like Doeuk Vannarith, won the city’s first-place award. “Today I feel proud of myself, that Uncle Chea Sophara honors us for working hard,” she said.

The ceremony honored 2,365 stu­dents from 15 schools in Phnom Penh. Parents and teachers were invited to attend the event, the second organized by municipal officials.

First prizes of $7.50 were awarded to 775 students; second prizes of $6.25 to 792 students; and third prizes of $5 to 798 students. Awards also went to 41 street children being educated at Wat Than and 12 students who drew pictures for the city.

Outside the City Hall fence, some other teenagers looked on with hungry eyes. Shoeshine boy Sao Kha, 14, came with three friends in the hopes of finding cus­t­omers in the crowd.

With a brush in one hand and shoe polish in the other, he kept his eyes on their feet. “I came to brush shoes for money,” he said.

“I’d like to sit with [the students]. But I don’t have good clothes to wear, and my name is not on the list,” he said. “I’m not a student, though I want to learn, and I want to have friends. But when I wake up at 6 am, I’m hungry and my mother forces me to earn money.”

Phiron, 13, seemed more content with his lot. “I know every restaurant in Phnom Penh, and I make from 4,000 to 7,000 riel per day,” he said. “I’m good at shining shoes, and I’m happy when I see guests in restaurants with dirty ones.”

Chea Sophara told the honored students that they should not forget that other young people face great difficulties as Cam­bodia struggles to improve its standard of living.

“In Phnom Penh right now, there are many children who badly need to liberate themselves from poverty,” he told them. “In the early morning, they must rush to ponds to fish.

“Some shine shoes, some sell news­papers, some are beggars or pick out edible food at the dump. And some are drug-addicted,” he said.

The city is donating 20 bicycles to street children who attend school at Wat Than. 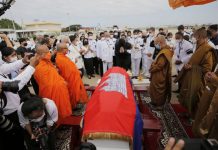 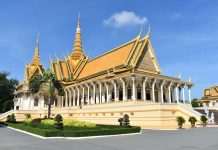 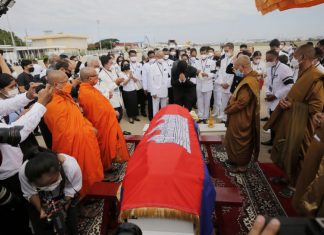 By
Xinhua Net
-
December 6, 2021
0
The body of Cambodian Prince Norodom Ranariddh arrived in Cambodia from France on Sunday for a traditional funeral, a spokesman said.

Cambodia’s Norodom Ranariddh: The man who would not be king

Cambodia’s Norodom Ranariddh: The man who would not be king