A 21-year-old university student has been arrested for the brazen murder of Defense Ministry Major Ly Davy in Phnom Penh on Tues­day, and on Thursday told investigators that he killed the official because she often spat at him, according to police.

Mey Kimheng, a freshman at the Royal University of Phnom Penh who lived with his family next door to the victim in Tuol Kok district, was arrested at his home at about 9 p.m. on Wednesday, said Eng Sorphea, chief of the municipal police’s serious crimes bureau.

Ly Davy, 36, a major in the Defense Ministry’s military service department, was walking alone near the Tuol Kok’s Depot Market at about 9:45 a.m. on Tuesday when a man wearing a helmet stabbed her repeatedly in the chest with a kitchen knife before driving off on a motorbike.

“We arrested the suspect at his home last night,” Mr. Sorphea said on Thursday. “Their homes are next to each other and we are preparing documents to send him to court tomorrow morning.”

He said Mr. Kimheng confessed to the murder under questioning at the district police station.

“The victim had been spitting at the suspect for more than two years,” he said. “Whenever she saw the suspect, the victim always spat at him. This is called discrimination and caused the suspect to become angry and take revenge against her.”

Mr. Sorphea said he did not know why Ly Davy might have despised Mr. Kimheng, however, and that police had not asked him.

He added that footage of the murder, captured by a security camera installed by one of the businesses near the Depot Market, had helped them link Mr. Kim­heng to the crime.

“All the evidence was collected and was verified with the security camera. It shows that they are 100 percent the same and it’s undeniable. After the stabbing, the people in the area saw what was happening and one of them used an umbrella to beat his hand until it was broken and some of them kicked him. And one of his hands is really broken,” he said.

“More importantly, the suspect confessed and we did not force him.”

She said Mr. Kimheng’s family got along well with her own, and that she was unaware of any animosity between her niece and the student. 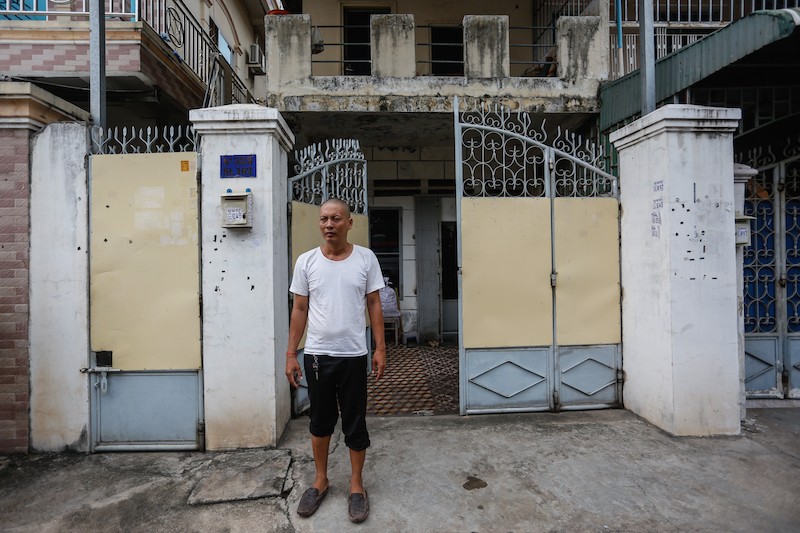 “I still don’t understand why my niece was killed,” she said. “I never saw my niece behave badly and they never had any relationship with each other. She and I were very close, so I knew her well.”

“We always smiled when we saw each other,” Ms. Silen said of the two families. “So the relationship seemed normal even though we weren’t close, and we were both very busy with our individual businesses.”

At Mr. Kimheng’s home on Thursday, his father, Mey Sarith, declined to speak with a reporter. Other relatives, who all refused to give their names, said Mr. Kim­heng was a well-mannered and serious student, and could not possibly be the killer.