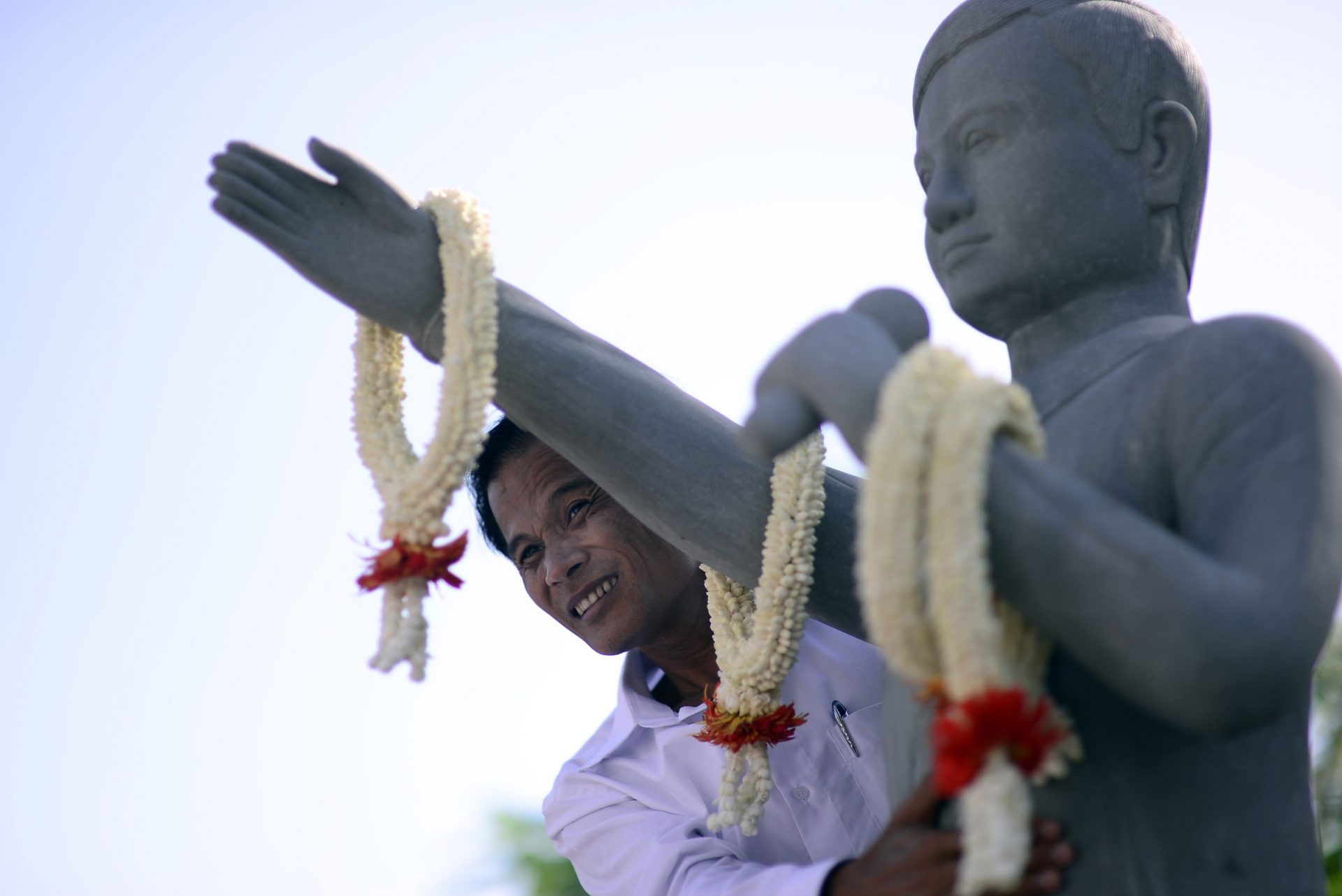 The plinth-mounted 1.68-meter statue was shrouded in red fabric prior to its unveiling, after which it was adorned with garlands of jasmine flowers by mourners.

The statue depicts the once-popular union leader—who was gunned down just meters away on January 22, 2004—holding a microphone with his right arm outstretched, as if to address an audience.

And while the stone effigy bears very little resemblance to Chea Vichea, it is in fact the second attempt to create his likeness in statue form—the first by a Siem Reap-based sculptor was scrapped entirely after the FTU said it was not happy with the representation.

“Today I am honored to celebrate the blessing ceremony and to officially inaugurate the statue of Chea Vichea, former leader of the Free Trade Union of Cambo­dia,” said Chea Mony, who was appointed FTU leader after the murder of his brother in 2004.

Those who gathered to mark the day said the statue, which cost $7,000—and for which Phnom Penh Municipality donated $5,000, symbolized the bravery and compassion that Chea Vichea displayed in his fight for workers’ rights—a fight which earned him victory in securing the first-ever minimum wage for garment workers.

Yun Chan, 40, from Phnom Penh’s Meanchey district, said she took the morning off from work at a garment factory to at­tend the ceremony.

“I wanted to come and pay my respect to the statue, because [Chea Vichea] helped us fight for a higher salary,” she said.

Another worker, 41-year-old Poun Sreymom, described Chea Vichea as a brave, gentle man who had fought hard to secure a better future for Cambodian workers.

“I still vividly remember the first time I saw him,” Ms. Sreymom said as she held her 3-year-old son.

“He handed me a leaflet that called for more benefits for workers. I was so proud of him.”

And while there are two men—Born Samnang, 32, and Sok Sam Oeun, 45—serving 20-year prison sentences for their alleged role in the murder, international and national human rights groups and Chea Vichea’s own family are convinced that the two were made scapegoats for the killing, and that the real perpetrators are still at large.