Sihanoukville’s boarded-up Independence Hotel—thought by many locals to be haunted by ghosts—has been leased to Can­adia Bank and is being renovated to the standard of a three-star hotel, Sihanoukville Tourism Office Director Teng Huy said.

The posh hotel was built near the shore of Independence Beach in 1962 and was, until recently, owned by the government. It sat unused through the turmoil of the 1970s and re-opened in 1982.

Its semi-decrepit conditions and unreliable electricity added to its ghostly allure, but the hotel was never able to attract enough customers to raise money for a renovation. In the 1990s, less than half of the hotel’s more than 50 rooms were deemed habitable and made available to guests.  Hotel staff said in 1999 that they be­lieved the only hope for the ailing hotel was for a foreign in­vestor to pay for a sprucing-up. The hotel was boarded up soon after.

“The equipment of the hotel was too old and damaged,” Teng Huy said. He said the seven-story hotel will be leased for 70 years by Canadia Bank, according to a contract signed last year.

Canadia Bank official MK Ng said the hotel has been bought by a group of Cambodian businessmen with a $2 million venture capital loan from the bank. Can­adia Bank will control the hotel until the capital on the loan has been paid, he said.

Renovation will take one year, MK Ng said. Some rooms will be upgraded to four-star quality, and the bank is considering adding a nightclub or a casino, he said.

The hotel has been rumored to be home to either the spirit of a girl who killed herself in one of the rooms or the souls of four robbers who purportedly were killed there in the mid-1990s.

MK Ng, however, shrugged off the ghost stories with a laugh. “I visited one evening, and I am not so scared.” 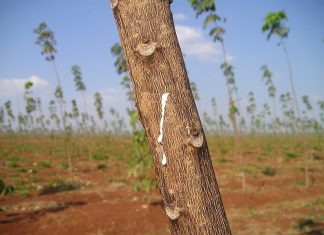 Talking about politics on Facebook can get you sent to prison...