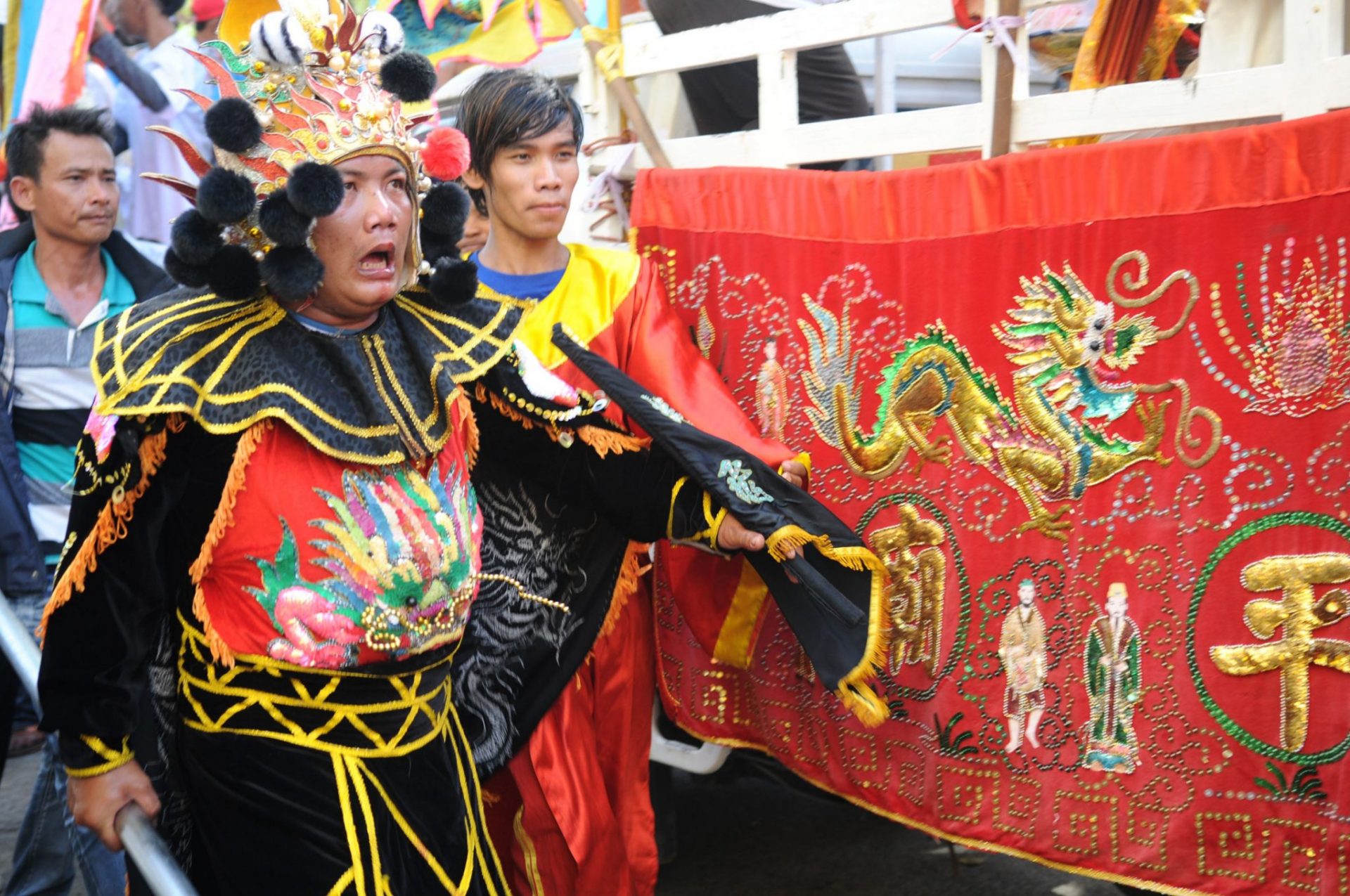 Surrounded by hundreds of cheering children and adults, the procession of Chinese spirits wailed in the distance.

As trucks decked with colorful dragon flags and makeshift altars snaked through the narrow roads of Phnom Penh’s Meanchey district, Sok Mean, 73, a rotund man flanked by two sweaty helpers, was the first of the possessed spirit mediums to descend onto earthly soil.

Channeling the Chinese spirit of Koma Sok Meas, or Golden Haired Child, Mr. Mean approached an altar outside a home in Chbar Ampov commune as dozens of women, men and children sank to their knees and prayed.

Considered a good spirit, Gold­en Haired Child, or Mr. Mean, smiled benignly as he threw sweets to the children and sprinkled sacred water on the many supplicants from a red plastic bucket.

One of the spirits, dressed in onyx with red wine dripping down his mouth, received particular attention as he downed alcohol and spat it out at people. When the medium returned to his spirit truck, he sat upon a chair of nails, but leaned heavily upon one of his helpers to prevent his whole weight from bearing down on the sharp spikes below his bottom.

Teenagers nearby filmed him with their smartphones.

According to Mr. Mean, who spoke by phone after the Golden Haired Child spirit had left his body at around 6:30 p.m., spirit possession is a family affair.

His father and grandfather both experienced the same possessions. He said the spirit of Kong Pheng, a Chinese war commander, chose members of his family to embody the spirit.

“I don’t know from what century” Kong Pheng hails, he said, add­ing that his body was overtaken by the Golden Haired Child early yesterday morning.

“During the spirit parade, my soul stays in the incense in the front of the truck, and the spirit stays in my body so I can’t feel anything,” Mr. Mean said. “For old people like me, the spirit does not stay in me long, maybe for only 10 hours. But young people can be possessed for an entire day.”

“Not all the spirits are angels. Some are ghosts, some are soldiers, and the bad ones would possess people and cheat the public,” he added.

“They do not really take care of the people.”

Known as the Hei Neak Ta, or Spirit Parade, the festival is held each year to mark the official end of the Chinese New Year celebrations in a uniquely Khmer manner. While the holiday is known as the Lantern festival in other parts of Asia, and is celebrated solely on the 15th day of the lunar calendar, festivities in Cambodia can go on for three to four days and often feature elaborate parades with a wide range of spirit mediums.

“The spirits came here to bless this street and I have taken part in this ceremony for almost 30 years,” said Ly Yung, 62, whose home on Street 367 was blessed yesterday by Mr. Mean.

Lin Li Tan, director of Fujian Ming Sheng Chinese School, which houses a Chinese temple visited by hundreds each year who pray for the spirits to enter their bodies, explained that spirit mediums will often prick their tongues with needles and then lick their blood onto spirit money for good fortune.

“Sometimes, when they put the blood on the [spirit money], it’s for extra protection,” Ms. Li Tan said.

As the procession left her street, Ms. Yung remarked that the spirit parade was growing smaller each year.

“In previous years, there were more spirits and the people that the spirits entered were all old. But this year, the spirits have entered some new young people” Ms. Yung said.

While yesterday’s Hei Neak Ta had hundreds participating in it, another parade scheduled to travel from Takhmao City along National Road 2 this afternoon will attract even more revelers and will feature more spirit mediums, and likely more bleeding from the mouth after having their tongues pierced with a needle.