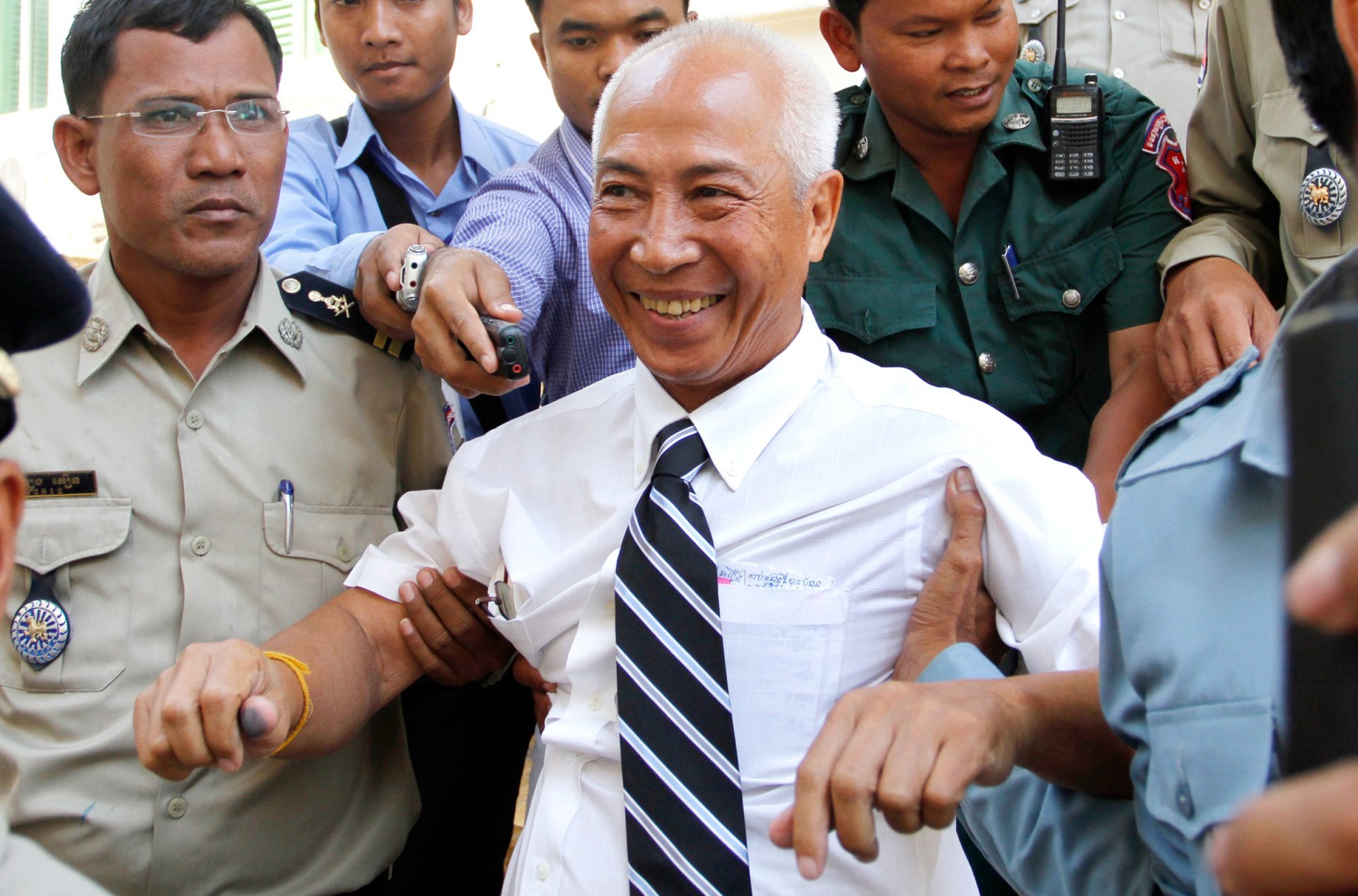 Independent radio station owner Mam Sonando gave another spirited defense on the first day of an Appeal Court hearing on Tuesday against his conviction for encouraging an alleged secessionist movement in rural Kratie province.

Gesticulating briskly and often in the defendants’ dock on Tuesday, the 72-year-old Beehive Radio station owner is fighting to overturn both his conviction and a 20-year prison sentence that the Phnom Penh Municipal Court handed down to him in a ruling in October that was widely rebuked by human rights groups and foreign governments alike.

Outside the Appeal Court gates, hundreds of Mr. Sonando’s supporters waved photos of the popular radio host, screaming for his release. Their chants streamed in through the courtroom windows, a muted but insistent soundtrack to the proceedings inside.

As he did during his first trial nearly six months ago, Mr. So­nando insisted that he had nothing to do with the events in Kratie province in May last year that the government has branded a rural rebellion.

“I educate people about democracy and nonviolence,” Mr. Sonando told the court, referring to both his journalism and his role as head of the Association of Demo­crats, which advocates for voter rights.

“I help the poor, and now I am accused of opposing the government and breaking the law. It is not true at all,” he said.

Gone from the court proceedings on Tuesday were the nylon sacks overflowing with farming and hunting tools—the supposed weapons of rebellion—that were placed like props between the defendants and judges throughout Mr. Sonando’s first trial in the municipal court in September.

As in September, Mr. Sonando adamantly denied that he had urged a group of villagers from Kratie’s Broma village—who had come to visit him at his Phnom Penh office—to resist a rubber plantation encroaching on their farms.

Mr. Sonando said he spoke with the unannounced rural visitors only—and briefly—about their hopes of installing a generator in the village and that he even advised them to clear their plans for electrification with the local authorities.

“I met them at my office and dis­cussed the generator, not the land dispute in Broma village,” he said. “They asked me for advice. I told them they should ask authorities to use a generator first. If the authorities do not allow you to use it, you would break the law.”

And again Mr. Sonando insisted that he attended a meeting of a dissident Khmer-American group in the U.S., the Khmer People Power Movement, strictly as a journalist, not as a supporter of their cause.

At his trial in September, police sought to link him to the U.S. group and its antigovernment cause by exhibiting in court a printout of an invitation the movement had extended to Mr. Sonando and posted online.

Before testimony got under way, Mr. Sonando’s lawyers made an unsuccessful bid to postpone the hearing because none of the seven witnesses they had asked for had shown up.

Some of those witnesses were convicted along with Mr. Sonando in absentia and remain at large, including Bun Ratha, who was sentenced to 30 years for his own role in the alleged secession. But some of the other witnesses, also convicted in October, are in Cambodia and now free, having had most of their sentences suspended after testifying against Mr. Sonando in the alleged secession.

Appeal Court presiding Judge Khun Leang Meng said the court had summoned more than 10 witnesses in all but had no power to compel them to show up for the hearing.

“Whether or not they join, it is their right,” he said.

Of the 13 others convicted along with Mr. Sonando in Oc­tober, only three—those who would not implicate the radio station owner—remain in jail. Of those, two are appealing their cases with Mr. Sonando.

Both men also testified on Tuesday to knowing Mr. Sonando only as a voice on the radio, and not as a rebel leader.

“I did not know Mr. Sonando and I have never seen him before in Kratie province,” said Khan Sovann, who was handed a three-year prison sentence in October.

Touch Ream, who was sentenced to a five-year prison term in October, said the villagers had no intention to break away from government control.

“We did not know about a gathering against authorities in Broma village; we were told to pro­test to demand land for farming,” he said.

Hundreds of security personnel raided their village in May, evicting some 600 families and fatally shooting a 14-year-old girl in the process. The government has refused to investigate the killing of the teenager, having dismissed it as an “accident.” Her death marked the only casualty of the so-called rebellion.

Since Mr. Sonando’s arrest in July, the case has attracted the at­tention of some of Cambodia’s big­gest aid donors and most prominent international rights groups, all calling for his release. Mr. Sonando even has U.S. President Barack Obama on his side. On a visit to Phnom Penh in November, Mr. Obama urged Prime Minister Hun Sen to release all of Cambodia’s political prisoners and called out Mr. Sonando by name.

Supporters who gathered outside the Appeal Court on Tuesday had come from far and wide.

Veng Vai, 62, spent three hours in a tuk-tuk with a handful of neighbors to make it to the court from Takeo province.

“He is honest and helps the poor people everywhere,” Mr. Vai said of the radio station owner. “The wounded, the injured, they came to his office and he gave them rice.”

He scoffed at Mr. Sonando’s conviction.

“They painted him,” Mr. Vai said, accusing the courts of having trumped up the case out of fear.

“It is a good station; they tell the truth,” he said. “What they talk about is the real situation in Cambodia.”