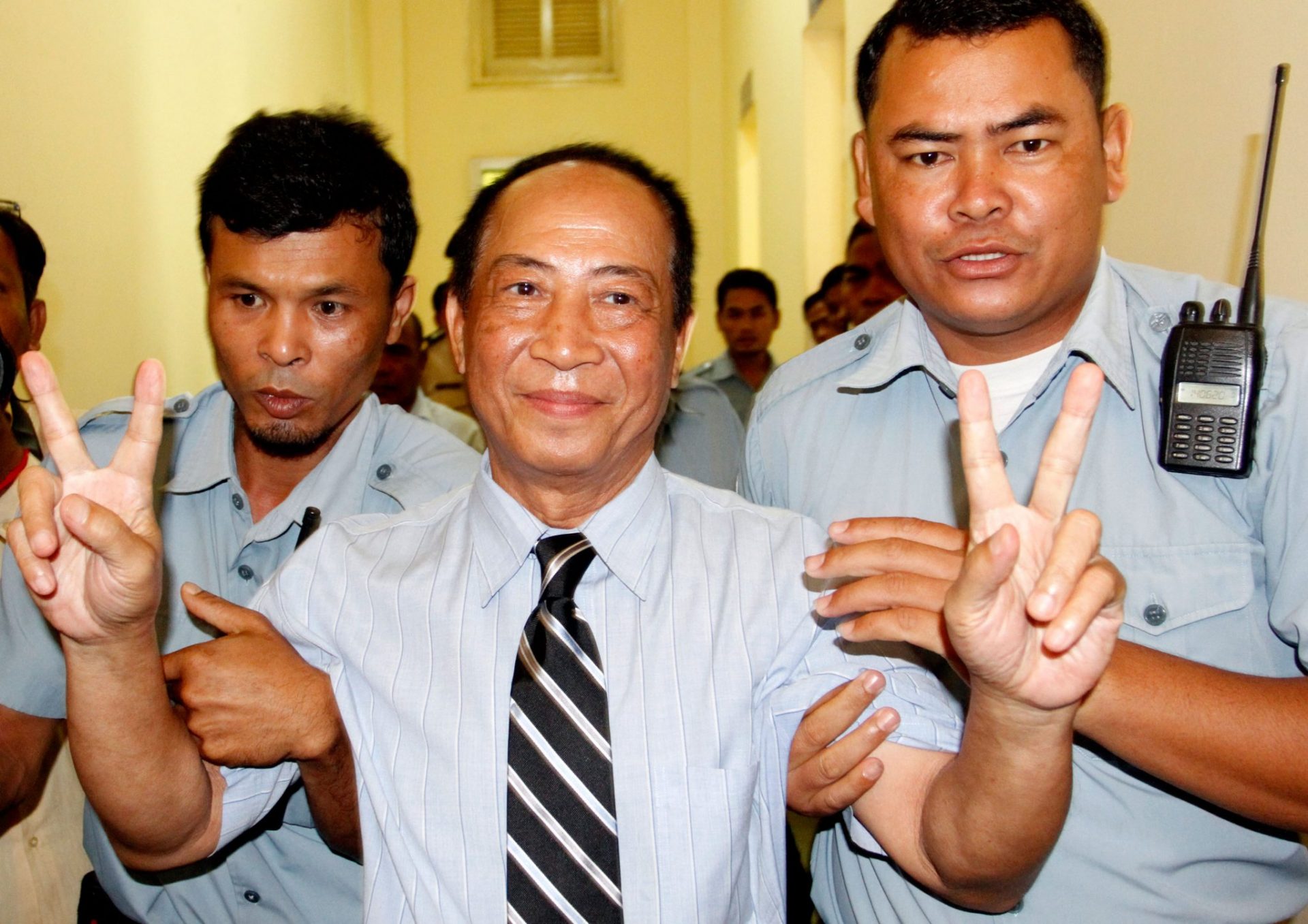 The Court of Appeal on Friday denied bail to imprisoned radio station owner and government critic Mam Sonando during a rapid-fire hearing, while hundreds of Mr. Sonando’s supporters marched to the U.N.’s Office of the High Commissioner for Human Rights in Phnom Penh to appeal for help from the U.N. envoy to Cambodia, Surya Subedi.

The 72-year-old radio station owner is currently serving a 20-year jail sentence for his alleged involvement in stirring up a so-called uprising in Kratie province in May, a charge that has been widely derided as politically motivated.

“The court does not agree to release Mam Sonando, 72, on bail,” presiding Judge Khun Leang Meng said at the end of the 40-minute session.

“The court is afraid that he will be able to put pressure on witnesses and cause public disorder,” Judge Leang Meng said by way of an explanation for his decision to deny bail.

Hean Rith, the Appeal Court’s prosecutor, said that because Mr. Sonando has dual nationality—Cambodian and French—he should not be released on bail because he might flee to France.

Mr. Sonando—who has faced a host of health problems since he was jailed in July—reiterated his innocence to the judges during his brief hearing, pointing out, once again, that he was not even in the country when the so-called uprising took place.

“This case occurred while I was in France and I don’t know what happened,” Mr. Sonando told the court. “If I did wrong, I would not have returned to Cambodia,” he said.

“I have been imprisoned for five months and for each month, I have lost a kilogram,” he added.

Mr. Sonando’s lawyer, Sar Sovann, appealed to the court to consider house arrest for his elderly client, adding that the court could also impose a gag order on the popular radio stationer owner.

“Please release him on bail, even if he is not allowed to go outside his house or to meet journalists,” Mr. Sovann said.

Both he and Mr. Sonando’s wife said they would now appeal to the Supreme Court.

Outside the Court of Appeal, more than 300 supporters—dressed in T-shirts and hats bearing Mr. Sonando’s face—protested for his release. When they heard that he was denied bail, several burst into tears.

Sim Lay, 53, said that she has lost hope in the judicial system.

“I am very angry with the court denying Mam Sonando bail, but this result will make me stronger in my protests,” Ms. Lay said, speaking between sobs.

After Mr. Sonando was driven back to Prey Sar prison, his supporters marched to the U.N.’s Office of the High Commissioner for Human Rights on Street 302—with hundreds of police and military police officers tailing them—to appeal for help from Surya Subedi, the human rights envoy to Cambodia.

Shortly after, Mr. Subedi arrived at the office and apologized to the hundreds-strong crowd in the street for not being able to attend Mr. Sonando’s hearing in person. The decision of the Appeal Court, Mr. Subedi said, was questionable.

“The decision made by the court this morning is puzzling to me. At his age and health, I would have expected that the court would grant him bail,” Mr. Subedi said, using a loudspeaker to address the crowd gathered outside the U.N. office.

Mr. Subedi visited Mr. Sonando in prison on Wednesday and spent an hour talking to him about his case and his conditions in jail.

Human rights groups also expressed disappointment with the decision to deny bail and said that the court’s stated reasons were “baseless.”

“[B]y refusing Mam Sonando bail and continuing the detention of the [72-year-old ] journalist and human rights defender, the judicial system showed itself to be politically pliant,” local rights group Adhoc said in a statement.

“CHRAC [The Cambodian Human Rights Action Committee] is of the view that [the decision] lacks legal reasoning in failing to consider the submissions from Mr. Sonando’s lawyer,” the group said a statement.

“We are concerned about the political interference with the judicial ruling of this case,” CHRAC added.