After last week abandoning her denials of an affair with deputy opposition leader Kem Sokha but still facing attempts by anti-terrorism police to charge her with prostitution, Khom Chandaraty on Friday sued Mr. Sokha for $300,000 over the alleged sex scandal.

The lawsuit led to an opposition commune chief being arrested on Sunday, as opposition leader Sam Rainsy said he believed the CPP had been organizing recent events to “set the stage for its Kangaroo court to prosecute Kem Sokha.” 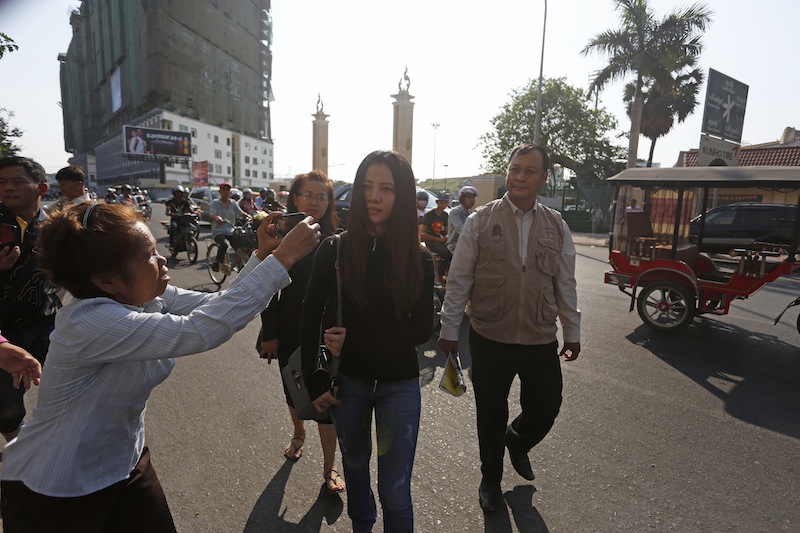 Ms. Chandaraty, better known by the nickname “Srey Mom,” had since early March denied the claims of a relationship with Mr. Sokha, even though the scandal first came to light through leaked telephone calls posted on a Facebook page bearing her name.

Posted with those recordings were angry messages directed at Mr. Sokha, ostensibly written by Ms. Chandaraty, but she maintained in interviews on the radio and with police in the weeks after the scandal came to light that she was only his hairdresser.

Yet after renouncing those denials to prosecutors last week, Ms. Chandaraty filed a complaint accusing Mr. Sokha of failing to give her $3,000 he promised her during their affair, and for then engaging party underlings and NGOs to tell her to deny the claims.

“Due to his activities, I have lost my honor and dignity, lost time, my job, and finances for my family, of which I stand as the core supporter,” Ms. Chandaraty said in the court complaint. “Especially as a single woman…I ask, who is going to need me?”

Taing Sunlay, director of the Phnom Penh Municipal Court, said on Sunday that the complaint had been received by the court and that a deputy prosecutor would likely be assigned to the case today.

That accusation led to the arrest of Mr. Chet at 10:30 a.m. on Sunday by Anti-Corruption Unit (ACU) Chairman Om Yentieng, according to the governor of Kompong Siem district in Kompong Cham province, where Mr. Chet’s commune lies and where Ms. Chandaraty’s mother lives.

“Om Yentieng came to question him until 10:55 a.m., and then he said the testimony of Seang Chet is involved in many things, and he needs to be questioned much more, so he asked to bring him back to Phnom Penh with him,” said district governor Srey Kimchay.

Ms. Chandaraty’s letter claims Mr. Chet gave her family $500 to convince her to lie about the case. The CNRP condemned the arrest as unlawful and based on a claim without any evidence. Mr. Yentieng could not be reached.

More than two dozen telephone conversations between Mr. Sokha and at least two women spanning a period of years have been leaked online since early March, with many appearing to be outgoing calls made from Mr. Sokha’s phone—leading some to question who recorded them and whether it was done legally.

Yet the investigations, which have inexplicably been carried out by anti-terrorism police, have focused on whether Mr. Sokha had a relationship with Ms. Chandaraty even though no one involved in the alleged adultery had filed a complaint.

The anti-terrorism police, who have said they were investigating the case simply because they were instructed to do so, became involved in Mr. Sokha’s case after youth activist Thy Sovantha—who rose to fame as a CNRP fan in the lead-up to the 2013 election—filed a complaint because she is mentioned in the recordings.

On Saturday, Ms. Sovantha herself called a press conference to reveal that she, too, would be suing Mr. Sokha for damages totaling $1 million for the distress caused by comments in one of the recordings, in which Mr. Sokha denies having an affair with her and accuses her of using the CNRP for personal gain.

Speaking at Phnom Penh’s Sunway Hotel below a banner displaying her face prominently on the right-hand side and Mr. Sokha and Ms. Chandaraty’s faces on the left, Ms. Sovantha said she was distraught by the defamation she had suffered from the recordings.

“I have decided to complain against Kem Sokha to demand $1 million in damages,” Ms. Sovantha said before calling for the CNRP vice president to be replaced.

“Now, he is not even leading [Cambodia]. If he leads the country or holds a bigger position, I think that this country will be full of debauchery,” she said.

“My stance is the same: Inside the CNRP, there is not only Kem Sokha. There are many who love the nation and many good people who should be supported. If the party is without Kem Sokha, it won’t disappear.”

Ms. Sovantha has also used her popular Facebook page to suggest Mr. Sokha should be charged with “sex trafficking” for flying Ms. Chandaraty to Bangkok during their alleged relationship—a crime that carries a sentence of up to 10 years in prison.

It is not clear whether the courts will still pursue the charges of prostitution and false testimony against Ms. Chandaraty now that she has moved to sue Mr. Sokha. However, she is set to be questioned in court on Friday.

The CNRP have mostly stuck to a policy of not responding to the accusations against Mr. Sokha, who in 2012 led his Human Rights Party to merge with that of Mr. Rainsy, forming the country’s first united opposition party after almost 20 years of squabbling.

The alliance has proven successful, with the CNRP in 2013 almost doubling the representation in parliament over that won by the two parties in 2008. It has since maintained that its unity is crucial to its hopes in the 2018 national election and has claimed that the CPP will attempt to divide it.

Mr. Rainsy said in an email that he believed Ms. Chandaraty had been forced to file a lawsuit against Mr. Sokha as part of a deal to end the prosecution against her.

“The girl is certainly under terrible pressure to continuously change her story. The government is trying to manipulate her so as to set the stage for its Kangaroo court to prosecute Kem Sokha on spurious charges,” Mr. Rainsy said. “This kind of maneuver is just shameful.”

The CPP has over the past year appeared intent on disturbing the fragile union between Mr. Rainsy and Mr. Sokha’s factions, with the “culture of dialogue” seeing the ruling party praise Mr. Rainsy’s moderation while accusing Mr. Sokha of plans for a coup d’etat.

In November, lawyers for then-Foreign Affairs Minister Hor Namhong suddenly ordered that Mr. Rainsy be jailed in accordance with a defamation case Mr. Rainsy lost in 2011. Mr. Rainsy has remained abroad to avoid being jailed for the two-year sentence, leaving Mr. Sokha to assume the mantle of “acting CNRP president.” The recordings of the phone calls started leaking online shortly thereafter.

Prime Minister Hun Sen has himself claimed to possess photographs of Mr. Sokha’s holidays with Ms. Chandaraty in Thailand, and Mr. Yentieng’s ACU has also been investigating promises Mr. Sokha allegedly made in the calls to buy his mistresses property.

The CPP government has also recently reinterpreted the protection granted by parliamentary immunity, allowing police to arrest lawmakers when there is clear evidence of a crime, even months after it was allegedly committed.

Kem Ley, the head of the “Khmer for Khmer” grassroots political advocacy group, said on Sunday he still wondered who had so meticulously recorded Mr. Sokha’s phone calls, and recalled the CPP’s successful splintering of political rivals in the 1990s and 2000s.

“The purpose of this game [is] to break down the opposition party. They must separate the chairman and vice chair of the party, and then …replace them with an alternative chair and vice chair. This is the game that they play. It is nothing new,” Mr. Ley said.

“They have only one way. They cannot get their popularity back, they cannot win back the hearts of the people, so they have only this: Break down the opposition and take back control of the country.”