The controversial exporting of Cambodian sand to Singapore has finally—if temporarily—been stopped, according to officials from the two countries, amid long-running criticism over discrepancies in shipment records and environmental damage.

A Singapore official said the country had ceased importing sand from Cambodia, according to a Singaporean media report on Monday, while a Cambodian Mines and Energy Ministry spokesman said exports were suspended for the time being.

Singapore, a wealthy city-state hungry for sand used in reclamation projects to expand its land area, has denied any improper activities despite a gaping difference between the huge amounts of sand recorded entering its ports and the drastically smaller totals that source countries such as Cambodia have reported leaving their shores.

The sand trade has long been roiled by tales of large-scale smuggling, rampant destruction of coastal habitats, and even “sand mafias” who have been said to rule over black markets.

In Cambodia, sand dredging—mostly in Koh Kong province—has devastated coastlines and ecosystems and become a flashpoint for environmental groups campaigning against continued exports.

On Monday, The Straits Times reported a Singaporean Ministry of National Development spokesman as saying that Singapore had stopped sand imports from Cambodia in November in response to a ban on all sand exports by the Cambodian government.

The spokesman also denied that there had been any illicit sand trading in Singapore.

“Thus far, Singapore has not encountered instances of smuggled sand, or contractors bringing sand into Singapore carrying fake export permits,” he was quoted as saying.

Asked to respond to the report, Chhe Lidin, a spokesman for Cambodia’s Mines and Energy Ministry, said sand exporting was suspended in November to “reassess and improve the whole process altogether.”

He added that past exports to Singapore had been done “in a responsible manner.”

The U.N.’s Commodity Trade Statistics Database shows Singapore importing 73 million metric tons of sand from Cambodia between 2005 and 2015, but figures from the Cambodian Ministry of Mines and Energy show just 16.2 million tons leaving the country. 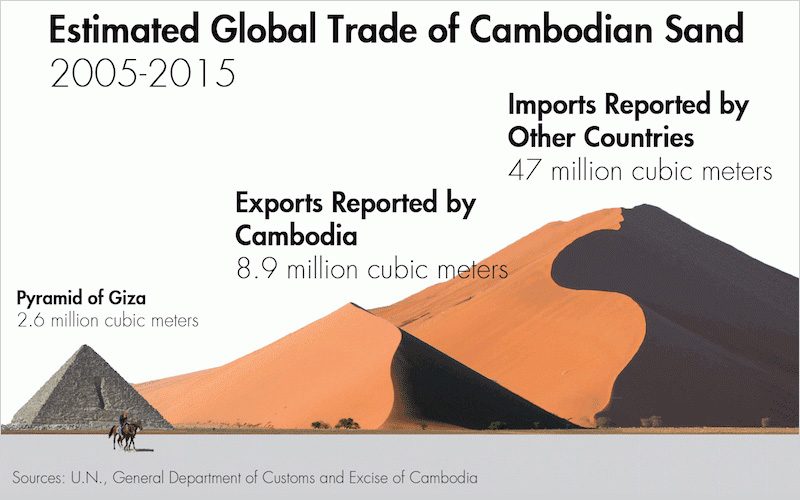 The difference of almost 60 million tons in unreported exports—worth hundreds of millions of dollars—has become the focus of questioning in the National Assembly, discussions between NGOs and the Mines and Energy Ministry, and a government ban on sand dredging in Koh Kong.

Alex Gonzalez-Davidson, the exiled director of the environmental NGO Mother Nature, said sand dredging in Koh Kong had only taken off in 2007 after Indonesia banned the export of marine sand and Singapore promised to buy massive amounts of sand from Cambodia.

“So, now that there seems to be a moratorium on further exports, we hope that the local environment will slowly start regenerating itself and that fish catches will start rising once again,” Mr. Gonzalez-Davidson said in an email.

“The biggest concern we have is that both governments will try at some point to resume sand exports, after coming up with some new scheme, such as sending the sand to Singapore via Vietnam, as the Cambodian government has already admitted doing in the past.”

He said the Singaporean government should open up its books and make publicly available all information and documents on sand shipments from Cambodia.

“Then, they should make it loud and clear that they will not be importing any more of this dirty Cambodian sand,” he said.

“Both governments have been caught with their pants down on this issue, and it is now snowballing into a big headache, especially for Singapore, which tries very hard to come across as accountable, transparent and responsible.”