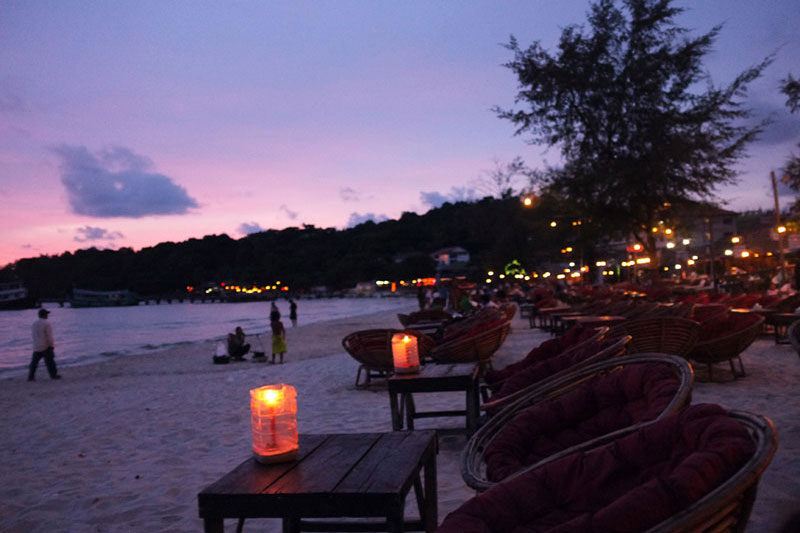 SIHANOUKVILLE, Preah Sihanouk province – This tourist town counts itself among the Most Beautiful Bays in the World Club and more than 1 million tourists each year are drawn to its tropical water and sandy shore. Yet when the U.S. Embassy last month warned its citizens to avoid some beaches here after sundown for fear of violence, few were surprised.

Sihanoukville has become a haven for high-end development in recent years, with private beach resorts, luxury island retreats, five-star hotels and casinos rising up along its coast.

But as the town’s star grows brighter on the tourist map, Ochheuteal Beach and the adjoining backpacker hub Serendipity Beach retain their reputation as the perfect place to find trouble in paradise.

“U.S. citizens are advised to avoid the beach bars on Ochheuteal Beach in the evening hours due to the potential for gang activity and an increased prevalence of drugs and unprovoked violence against foreigners,” the U.S. Embassy warned on July 15, referring to a spike in recent attacks against U.S. citizens, including a multiple stabbing.

The advice fits well with the Wild West narrative spun over the past decade by travel bloggers and online forums. But authorities and business owners say crime is down in the area, and claim the U.S. Embassy’s warning undermined ongoing efforts to clean up the beach’s image.

“Here, we do not allow any groups or gangs to operate and if there is a violent case, we take action immediately—our police are determined to ensure the safety of visitors to Sihanoukville,” he said.

In addition, a network of volunteer agents has been established, incorporating local business owners, to assist with crime prevention. These volunteers receive uniforms and bicycles and have the right to intervene in a dispute and to detain people they see committing crimes, Mr. Phaly said, though they are instructed not to put themselves in danger.

“Now, we have 180 voluntary members selected from among moto-taxi drivers, hotel staff and vendors who have businesses along the beach, including foreign businesspeople, as they encounter the majority of incidents and can provide information to the police,” he said.

Nop Panha, deputy chief of the provincial tourist police, said such measures have seen the number of criminal incidents drop by 12 in the first six months of the year, from 57 in 2013 to 45 this year. Among those cases, he said, only 12 were against foreigners and they were mostly related to petty theft.

“Tourists spend a lot of their time on the beach having a swim, and do not take proper care of their belongings, so the kids see their chance to steal it,” Mr. Phaly said.

When a U.S. citizen was stabbed earlier this year, he said, police acted immediately. But Mr. Phaly said police determined that the violence resulted from a verbal argument and did not reflect the overall situation on the beach.

“When problems happen, tourists focus on the police; everything is up to the police to fix,” said Mr. Panha. “But tourists must participate in keeping themselves safe. We try to make the dangers clear with posters and information at their hotels but many still do not listen.”

Local hotel owner Douglas McColl is the vice president of the Sihanoukville Tourist Association (STA), an organization that works with authorities to prevent crime and is literally cleaning up the beach by sending out teams of volunteers every day to pick up rubbish.

Crime on Cambodia’s busiest stretch of beach is definitely down, he said. But Mr. McColl cautioned that the low number of reported crimes paints too rosy a picture, as many tourists do not report crimes through official channels.

“By and large, a lot of the crime has gone down and bag snatching has [gone] down dramatically. But have the problems gone away? No. While there have been a bunch of advances, there are still some bad apples that are the poster boys for the bad image,” he said.

Mr. McColl said rowdy late night establishments on Serendipity Beach attract a shady clientele to mix among the party crowd. But he has some ideas for how the remaining problems could be solved.

A fully uniformed police presence after sundown, more lighting along problem areas of the beach and a requirement for motodops and tuk-tuk drivers to officially register themselves would all help ward off would-be criminals, according to Mr. McColl.

“There is no magic bullet, however, just lots of little initiatives,” he said.

Regardless of the disreputable aura that lingers around Sihanoukville’s longest and busiest stretch of beach, tourist numbers in the town remain on the increase.

The first six months of 2014 saw 764,000 visitors to Sihanoukville, according to the latest figures from the provincial department of tourism—up more than 27 percent from last year, when tourist numbers for the entire year topped 1 million.

“Tourists are increasing to Sihanoukville every year—more than 700,000 people visited so far in 2014, including 300,000 foreigners, which is a big increase on last year,” said provincial governor Chhit Sokhom.

“We recognize there is a [crime] problem but it is not a very serious one. But we are always thinking about how to tackle the robbery situation on Ochheuteal and everywhere else,” he said.

Mr. Sokhom said he holds regular meetings with tourist operators and foreign businesspeople. One of the measures in place to curtail theft is to send homeless children who are caught stealing to a center run by M’Lop Tapang, a local NGO that works with and educates street kids.

“Some kids have been escaping from the organization and have been returning to the beaches,” he said.

Ho Vandy, co-chair of the Government-Private Sector Working Group on Tourism, said that petty theft on Ochheuteal Beach remained a serious issue for tourism in Sihanoukville, despite continuing overall growth.

“If bad problems happen, they will obviously have a negative impact on tourism so the private sector wants to ensure this is minimized and has been having meetings with the Ministry of Tourism to address the issue,” he said.

“Everywhere that tourists go, they want to go back home with the same belongings on their person.”

Tith Kleuy, who has worked as a motodop by Ochheateal Beach for more than 10 years, said from his perch near the beach that drugs and serious crimes are down. But he said tourists need to be more careful than ever on the beach.

“Last month, two men on a motorbike grabbed the bags off two ladies who were walking along the street by the beach, and the same faces reappear a few days after they were arrested. But we don’t dare say anything or they may take revenge,” he said.

Further along the beach, Thach Sreyna has sold grilled eggs for the past seven years and watched as the jerry-rigged bars and restaurants along the beachfront grew more crowded and boisterous.

“Guests are sometimes bad guys and very aggressive,” she said. “So we can’t just put the blame on the local people here—if they come to the beach and cause no problems, no one is going to do anything to them.”

Other vendors, restaurant staff and even backpackers interviewed last week agreed that visitors to Ochheuteal had little to fear other than their own carelessness.

“I like that it’s still rough around the edges and that there’s still an anything-goes atmosphere,” said 26-year-old backpacker Kirsty Murray from Northern Ireland.

“But it isn’t particularly threatening,” she said. “I’ve been more afraid walking back from the pub at night at home than I do here.”