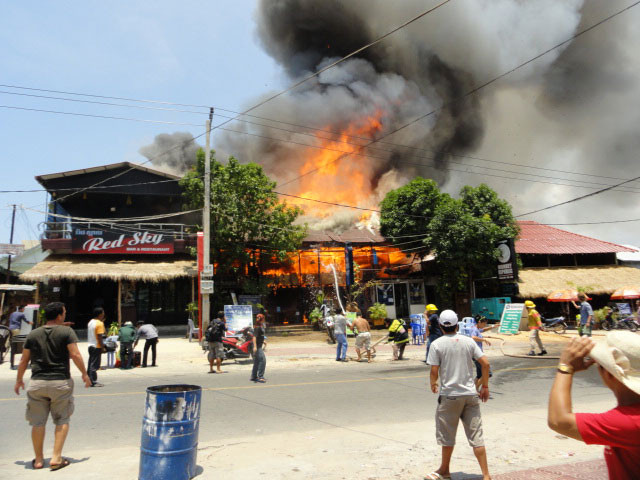 A water shortage in the tourist town of Sihanoukville has led authorities to advise scores of businesses to dig their own wells as only 50 percent of local demand is currently being met after high temperatures dried up the water supplier’s only reservoir.

The situation became so bad Sunday that the municipal fire department was unable to extinguish a blaze in the busy backpacker district along Serendipity Road because fire trucks ran out of water and firefighters were unable to tap local pipelines in order to put out the flames.

No one was injured in the blaze.

When firefighters arrived at the scene of the fire, which started at about 11:40 a.m., they began to attach their hoses to fire hydrants in the area only to find that they had gone dry. By 2 p.m., firefighters were able to tap into emergency water supplies and put out the fire, but not before four businesses were completely burned to the ground.

“We used 15 water trucks to stop the fire after requesting that the Phnom Penh Water Supply Authority open an emergency pipeline for our authorities to put out the fire,” said Preah Sihanouk provincial police chief Tak Vantha.

“I think the damage and de­struction would have been much smaller if we had enough water,” he said, adding that the cause and source of the fire were yet to be determined by police.

The businesses along Serendipity Road that were either damaged or completely destroyed included the Monkey Republic guesthouse, Mick and Craig’s guesthouse, The Dive Shop and Red Sky Bar and Restaurant.

Sunday’s fire dramatically highlighted the extent of the water shortage in the area, which has become particularly severe during the past three days.

On March 20, the provincial water authority distributed letters to more than 5,000 customers in the province asking them to either use their own water sources or reduce their consumption of water because Prek Tup Lake—the 15-hectare reservoir that stores up to a half-million cubic meters of water during the rainy season—had dried up.

With no water coming from Prek Tup Lake, Anco Water Sup­ply Co. Ltd., which has an exclusive contract to provide water to Sihanoukville, opened pipelines connecting Sihanouk­ville with Kbal Chhay, a waterfall 16 km outside of the city, according to Prak Chanroeun, the director of the provincial department of Industry, Mines and Energy.

But because of insufficient pipelines and frequent power outages in the area due to the nationwide shortage of electricity, Anco has only been able to pump about 5,000 cubic meters of water into the city each day, about half of the 10,000 cubic meters demanded by customers, according to Mr. Chanroeun.

“We are now pumping water only from Kbal Chhay as Prek Tup Lake has dried up and caused there to be a shortage of water for users.” Mr. Chan­roeun said.

“The company [Anco] is only able to supply approximately 50 percent [of demand].”

Of the 5,867 household users serviced by Anco, the 30 percent living at higher altitudes, such as those whose properties burned down Sunday, would be the least likely to have access to public water supplies as moving water uphill requires additional electricity, Mr. Chanroeun added.

Ngy Sun, the manager of Anco Water Supply, said that the company has installed a new generator at Kbal Chhay with the capacity to pump 20,000 cubic meters a day into Sihanoukville. But an inadequate network of pipelines is preventing the company from meeting demand, he said.

He also said that the high price of diesel fuel used to power the generator was making it difficult for Anco to provide water at 1,000 riel, or about $0.25, per cubic meter, to the provincial wat­er supply.

“We are able to supply more water than this, but the pipe network is limited, and the electricity is always off, and we have to use gasoline for the generator,” Mr. Sun said.

“We cannot supply water with only the generator because the gasoline price is expensive compared to the low price [we sell to] the provincial water authority,” he said, adding that provincial authorities sell water to users for up to 2,000 riel.

Anco, which is owned by local tycoon Kok An, met with provincial officials Sunday and agreed to build two additional 200-cm-wide water pipe networks between Kbal Chhay and Sihanoukville in order to ensure that residents are able to access water all year round.

But for residents and business owners in Sihanoukville without their own well, a more pressing concern is where they will find water now.

“I just found out that we have no water, so now I have to figure out where we are going to get water from,” said Bob Pipinich, the owner of Aqua Resort in Sihanoukville.

Even for establishments that have their own generators and wells to ensure that customers are able to access basic services, the failing public utilities are taking their toll.

Recently, he said, there have been power outages four to five days a week for between two and 12 hours at a time.

“You could say things are getting worse because there are more rooms and more guest houses. The amount of diesel I am using is ridiculous, and [local officials] don’t take any responsibility,” he said.

The calls from authorities for businesses in Sihanoukville to tap into their own water supply is only the latest example of the government calling on private enterprises to step in and help provide public services.

On Thursday, an announcement was published in a number of Khmer-language newspapers asking people with back-up generators to use their own power supplies so that electricity could be freed up for the rest of the population.

As in Sihanoukville, residents in Phnom Penh have been experiencing regular power outages, mostly due to the lack of water running through the country’s dams.

In December, Prime Minister Hun Sen twice called on the private sector to invest in their own fire trucks in order to supplement municipal fire fighting forces.

The government’s increasing pressure on investors and business owners, particularly in the tourism sector, to provide what in most countries would be considered public services and utilities is an issue that must be addressed, said Ho Vandy, co-chair of the Government-Private Sector Working Group on Tourism.

“I do hope the government considers much more than this,” he said, referring to calls for businesses to provide their own water, electricity and fire trucks. “The private sector already pays taxes and should get more confidence from the public side.”