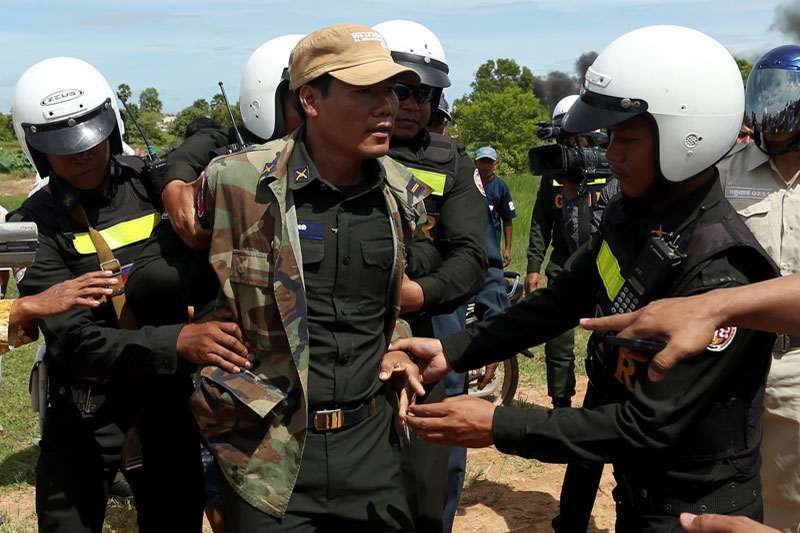 A 68-year-old woman faced down dozens of military and district police ordered to protect villagers attempting to demarcate her land on Wednesday in Phnom Penh’s Pur Senchey district after they sold it to a cousin of Prime Minister Hun Sen.

Huot Sarom is locked in a dispute over 5.67 hectares of farmland in Kakab commune with a group of 120 families who have already sold most of the property to businesswoman Dy Proem, a cousin of the prime minister.

In 2011, Ms. Proem was convicted of corruption and sentenced to two-and-a-half years in prison for paying $30,000 to influence an investigation into the land dispute, while a senior government official also received a hefty sentence for accepting the bribe.

However, no arrest warrant was ever issued and the pair served no jail time.

In March last year, Prak Sokhon, then a secretary of state at the Council of Ministers, issued a notice awarding the bulk of the land to the Kakab villagers and just one hectare to Ms. Sarom, who says she has been farming the land since 1979.

At about 8:30 a.m. Wednesday, military police and district police armed with AK-47 assault rifles, accompanied by district security guards, arrived at the site to supervise villagers attempting to delineate the border of the contested property with wooden posts.

The demarcation effort was hampered, however, by Ms. Sarom, who wrenched the markers from the ground as soon as they were installed, demanding that the roughly 40 police and 20 guards halt the process.

“Dear law enforcement officers, I would like to tell you that I do not need you to measure my land. It belongs to me,” Ms. Sarom said.

A brief scuffle then broke out between security forces and Ms. Sarom’s family, followed by further pushing and shoving between the woman’s neighbors and the intruding villagers.

Wielding a sickle, Ms. Sarom said she would “fight to the death” to protect her land. “If you continue aggressively, I will defend my land and this sickle will peel out your eyes,” she said.

“Please, Mr. Law, you have mistreated me for so long. Now I am fed up with you. I no longer need you.”

Sieng Sok, deputy prosecutor at the Phnom Penh Municipal Court, who took the lead in enforcing the March 2013 notice awarding the land to the villagers, was also present during the attempted demarcation Wednesday.

When asked why a court official was enforcing an order from the prime minister’s Cabinet, Mr. Sok declined to comment.

“Please ask the local authorities. I am not clear on this,” he said.

District police chief Yim Saran said police and the deputy prosecutor were there to ensure the safety and legality of the land-measurement process.

“We are here to enforce the government’s notice that awards the land to the villagers,” he said, declining to comment further.

In the end, Ms. Sarom’s determination won out, and police and villagers gave up and left just before noon.

Ms. Sarom’s lawyer, Kao Ty, however, decried the actions of the police and court official.

“The presence of a deputy prosecutor is an act of incitement…because he came here without any legal basis,” Mr. Ty said.

“The measuring of the land this morning was a last resort, to test their legal capability to claim the land for a land robber,” he said, referring to Ms. Proem.