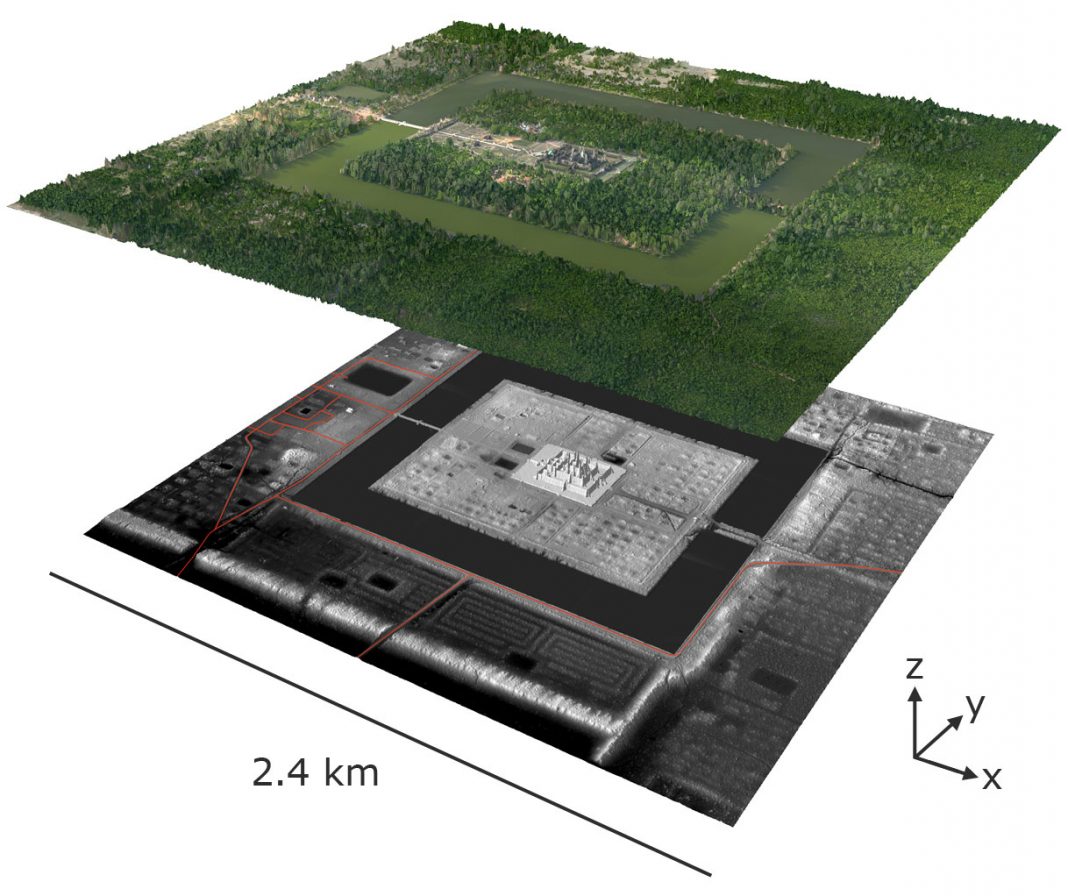 In April 2012, a helicopter took to the sky over Siem Reap’s Kulen Mountain to embark on a very unique archeological project. Fifteen months after its completion—barely a twinkle in archeological terms—not only is its findings quietly making history in the field, but it has provided researchers with answers that may otherwise have taken them years, if not decades, to obtain.

“I admit that the first time we saw the images, we stared wide-eyed, and spent the whole day glued to the screen,” said archeologist Christophe Pottier of the French-government research institute Ecole francaise d’Extreme-Orient (EFEO) who has spent the last two decades studying Angkor’s urban organization.

The project consisted of using lidar—an amalgamation of the words “light” and “radar,” and a technology developed in the 1960s for country-wide mapping endeavors—to produce images of areas in Angkor park, Phnom Kulen and Koh Ker in Preah Vihear province.

Findings from the venture—the first lidar archeological project conducted in Asia—have been substantial.

Early results have confirmed what many suspected regarding life in Angkorian times in Cambodia: That a whole population lived within the compounds of temples. But what researchers may not have realized is that a whole population also lived right outside the walls of Angkor Wat and other major temples, said Australian archeologist Damian Evans, co-director of the University of Sydney’s research center in Siem Reap City.

An image obtained shows a grid of perfectly ordered streets not only within the Angkor Wat’s moat but also surrounding it.

The images illustrate that the ordained urban plan of Angkor Thom spread well beyond the walls of the city, Mr. Pottier said. While it is too early to say what the size of population in the area was, this is one more confirmation that Angkor was a huge urban complex, he said.

French archeologist Jean-Baptiste Chevance believes he has found in the lidar images the exact location of the royal palace of King Jayavarman II on Phnom Kulen whose coronation has been considered the start of Cambodia’s Angkorian dynasty.

From a helicopter on which the technology was mounted, the laser was aimed at the ground, where it registered the surface in millions of points that were later turned into a relief, a graphic image, on computer.

The vegetation which makes Cambodia’s archeological sites so beautiful has also been the bane of archeologists: EFEO’s French archeologist Jacques Gaucher, whose latest study on Angkor Thom will soon be released, spent years in the field to reconstruct the social and physical structure of this walled city—a physical structure that the lidar results have confirmed.

“Remote sensing has been used for many years…. But when you take aerial photos or use any other technology, they cannot detect anything or everything underneath the trees,” said Im Sokrithy, an archeologist with the Apsara Authority, the government agency managing Angkor park, who was also involved in the lidar project.

Since Angkorian sites are usually in forest settings, this made it virtually impossible to get detailed maps of structures low on the ground, he explained. “With lidar you can catch everything under the trees…. Every man-made structure that was previously built can be seen.”

Though the technology registers underneath the vegetation, the project did not take chances.

First, a lidar engineer came to Cambodia and visited the sites to be mapped to better calibrate the equipment so it would focus on ground level and centimeter-high structures.

“And then we had to fly in April when the trees have the least vegetation attached to them so we could get more penetration of the laser through the forest to the ground,” Mr. Evans said. “We had to time it also when the first rains had come to settle the haze of the dust. So we had a very clear window of one month per year, which was April. And we just had to pray…We were very lucky. Everything went really well.”

While the royal city on Phnom Kulen has long been known by researchers, the lidar project has provided valuable data to better understand its scope, said Mr. Chevance, who has been studying for a decade this site occupied well before Angkor. His team from the Archaeological and Development Foundation, Phnom Kulen Program, now has images showing the extent of the city and knows precisely where to excavate to unearth the palace. The images also outlined the elaborate network of dams and reservoirs at Phnom Kulen, which can be useful not only for archeological research but also for the Cambodian authorities who would wish to get a blueprint of the region’s Angkorian hydraulic system, he said.

The project in which took part eight archeological teams from seven countries also required the Cambodian government and Unesco’s support to obtain a special authorization to fly a helicopter over the World Heritage site of Angkor.

“You can definitely not just fly over Angkor Wat,” said Mr. Evans. “We needed to get documents to certify that there would be no damage or impact on the temples or on people’s eyes from the laser.”

However wonderful the lidar technology is, it would not have produced such results without the archeologists’ years of research to pinpoint where exactly to map: The teams would not have spent what is for archeologists a fortune surveying areas at random, Mr. Chevance said.

Now armed with the lidar data, Mr. Pottier said, “We have a precise vision of the whole sites in which we are conducting research, which will enable us to better target areas to excavate.”

Since the 1990s, archeologists at Angkor have turned to the latest technology available to map Angkor, Mr. Pottier said. Twenty years ago, they used aerial photos, then in the 2000s, they switched to radar and satellite images. Now, they have images produced through lidar technology, which will help plan research and excavations for years to come, he said.

Chances are that in a decade or so, another revolutionary technology will appear that will advance even more the understanding of the Angkorian era, Mr. Pottier said.