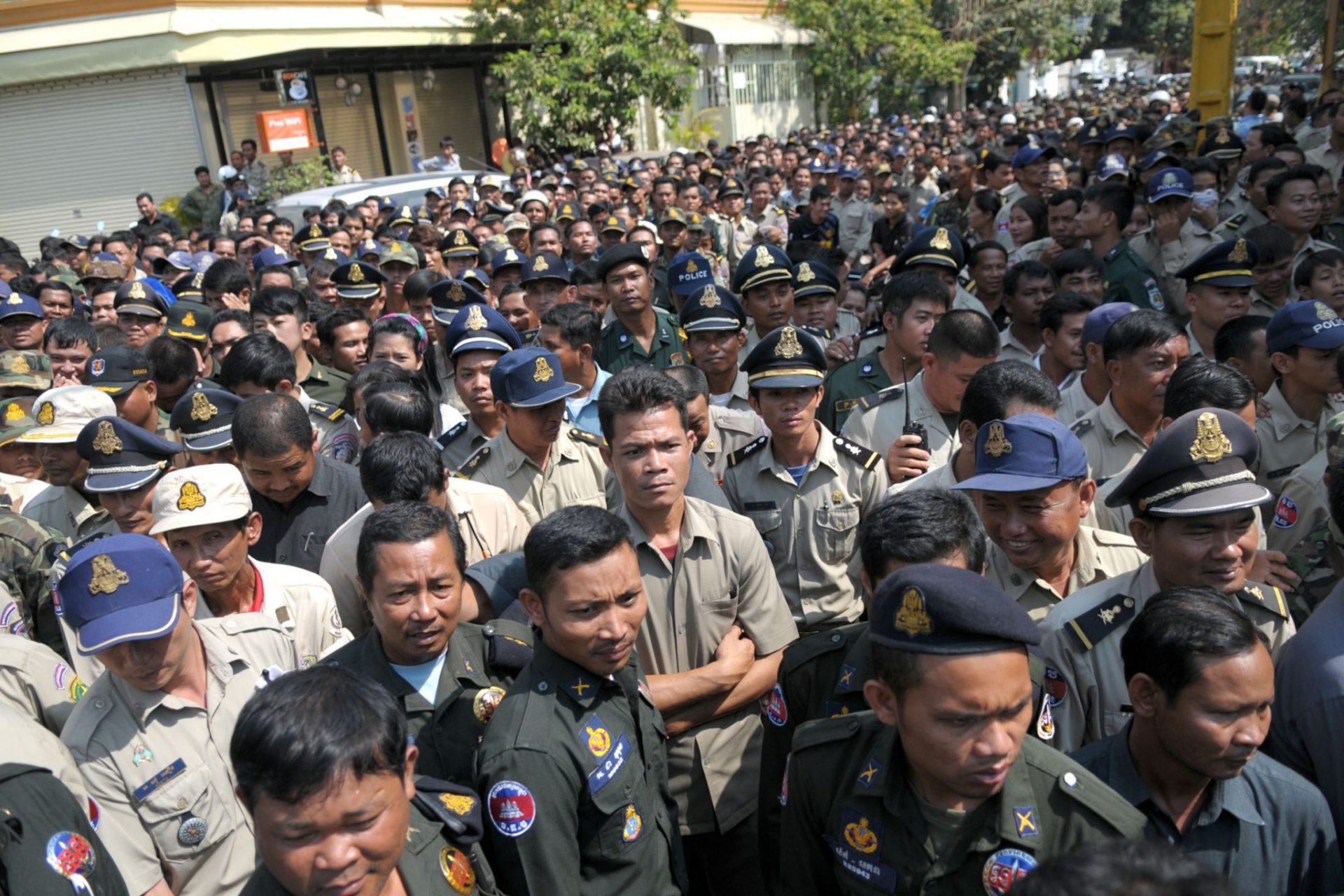 At 9 a.m. on Sunday, more than 200 soldiers, police and military police officers were gathered outside a large mansion on Street 55 in Phnom Penh’s Daun Penh district. By 10 a.m., their numbers had swelled to about a thousand, now including members of the national bodyguard unit, turning the street into a sea of government uniforms.

Pheapimex holds a number of economic land concessions around the country, most notably a 316,000-hectare site in Pursat province’s Krakor district where villagers have staged several protests alleging that their land was illegally cleared. Armed military police officers have been deployed to guard the concession.

But the grateful officers clogging the streets around the house of “Yeay Phou,” or Grandma Phou, on Sunday—picking up between 30,000 riel ($7.50) and 50,000 riel ($12.50) each—readily admitted to the special relationship.

“We help her when problems arise, not only in Phnom Penh but also in the provinces,” military police officer Sieng Radin said while waiting outside the gates. “She loves the armed forces because she knows we protect her and she is a high-ranking official. She may be a business woman, but she also works with the Cambodian Red Cross.”

“And it’s not only the Gendarmerie [national military police], it’s also other joint forces that help her with strikes, and if the strikes affect her projects, like Boeng Kak,” Mr. Radin added.

Chan Dora, a military police officer who said his unit worked directly for the family, attributed Ms. Sopheap’s generosity to her gratitude for their services.

“I’m part of the unit that protects her family, so she gives us ang paos to thank us. I really appreciate it,” Mr. Dora said. “We are military forces and we are also assistants to her. We always help with whatever she needs help with.”

More than 5,000 ang paos were finally handed out, said Lao Van, Mr. Meng Khin’s son, though he did not know how much money it all added up to.

“This is our kindness, to distribute the ang paos to the armed forces because they work very hard. All of them, like the traffic police and other police, they not only work for my family but also for everyone’s families,” Mr. Van said, adding that his family had been making the annual mass donations for nearly a decade.

“What you see now is the result of the [informal] policy for the higher-ranking [officials],” she said. “So if there is any change, there needs to be a policy from the top that the military and the police have to be independent and not have…financial transaction whatsoever from the business or private sectors.”

Council of Ministers spokesman Phay Siphan said the country’s armed forces exist for the benefit of the public, not private enterprises, adding that he could not comment on whether Ms. Sopheap’s tradition of giving the armed forces ang paos was appropriate.

“It’s hard for me to say if it’s proper or not proper because we don’t have any such law or regulations on what we call a conflict of interest,” he said.

Either way, Lon Saran, a military police officer who has received the ang paos five years in a row, summed up the deal with Khmer proverb.

“Mean tou mean mork,” Mr. Saran said, meaning roughly that when one provides a gift to another, help will come to the benefactor.