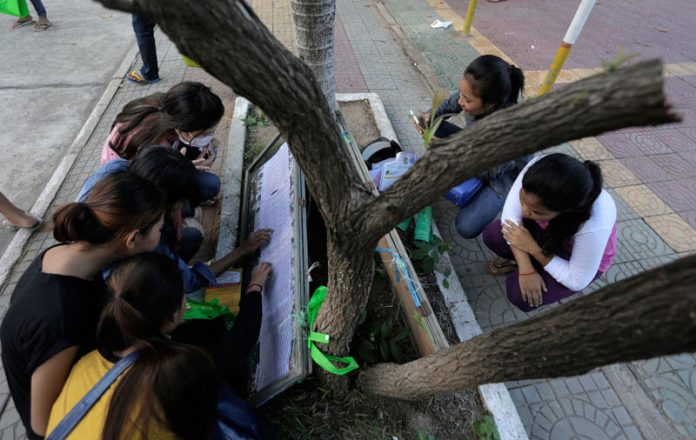 After releasing the results Friday of a national re-sit of the grade 12 exam, which brought the total pass rate above 40 percent—half the number that succeeded last year—Education Minister Hang Chuon Naron said he is ready to move forward with reforming a system long beset by cheating and fraud.

Just 18 percent of students, or 10,871 pupils, who sat the second- and final-chance exam last month passed under the strict eye of the monitors deployed by the Anti-Corruption Unit, according to the Education Ministry figures.

With 25.7 percent of students passing the first exam—only 11 with A grades—the highest mark in the second run was a C grade achieved by a young woman from Prey Veng province. A further 55 students managed a D grade, while the remaining pupils scraped through with an E.

“It’s half of last year’s pass rate, but it shows the quality [of the exam],” said Mr. Naron, who implemented a drastic overhaul of this year’s exam, which had in past years been tainted by the widespread practice of teachers accepting bribes to let students cheat.

Mr. Naron, who in August expressed the hope that his education reforms would produce a graduating class with the potential to “restore Angkor,” said his ministry was now focused on improving teaching and learning standards so that the 2015 crop of graduates could surpass this year’s cohort.

“We have four priorities that we [will] focus on,” he said. “That is a lot of work, but now we have a clear picture of what to do.”

Those priorities include enhanced school inspections, providing incentives and career development to teachers, and new teacher training initiatives such as filming the top educators in action and disseminating the videos to other teachers.

The end goal is to reverse the flow of ill-prepared graduates, who for years have transitioned into tertiary education or the workforce without the skills and knowledge to back up their on-paper qualifications.

The changes are unlikely to come cheap—Mr. Naron said that the total cost of holding the two exams this year was $5.2 million, $2 million on the re-sit exam.

Among those who failed for the second time was Hong Sovanny, 49, a kindergarten teacher at Yamabiko Primary School in Phnom Penh’s Sen Sok district, who said she never graduated from grade 12 because her family was too poor to support her studies.

“When we [teachers] take this test, if we pass we get a salary increase,” she said. “It was too strict. I have no desire to take it again.”

Rong Chhun, president of the Cambodian Independent Teachers’ Association, said the reforms exposed urgent gaps in the country’s education system—particularly in primary schools, where he claimed many children are still unable to read or write—and came decades too late.

“They should have improved this 10 years ago…but although it is late, it is better than not making chances, since we do not want to continue this old way,” he said.

Both Mr. Naron and Mr. Chhun noted that students who failed could pursue an associate degree or enroll in vocational training as an alternative to a university education.

For Rosechan Makara, 21, who was checking his results at Chaktomuk High School, failing the exam for a second time meant an associate degree is his only option until he can take the test again next year.

However, despite his own lack of success, a smiling Mr. Makara said he supported the reforms.

“It’s good because they want to elevate the person who is the best so that they can have a good education and apply for the best jobs,” he said.