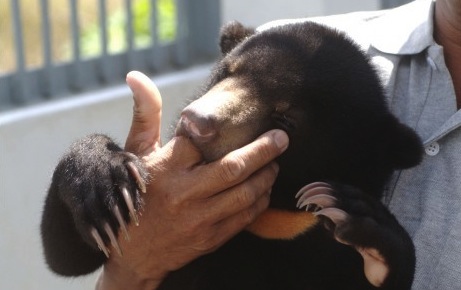 Hope’s sidekick, named “173,” follows her around as if they were inseparable twins. Together, they swing in a hammock, bathe in a pool and, sometimes, climb up the metal bars of their enclosure to pull on the camera straps of adoring visitors.

Though the smallest and most threatened of their kind, the two sun bear cubs are thriving.

Just a few months ago, however, the future of Hope and 173—named as such because she is the 173rd bear that was rescued and brought to Phnom Tamao Zoological Park and Wildlife Rescue Center—didn’t look so bright.

Hope had become the pet of bored soldiers in Preah Vihear province, who would have likely sold her to wildlife traffickers once she got too big, and 173 was spotted on a public bus in Kratie province.

Most likely, both bears would have eventually wound up as ingredients in traditional Chinese medicine, said Chuon Vuthy, program manager of Free the Bears, which built the Tamao bear enclosure and takes care of the two cubs.

“I don’t think they’d have had a chance,” if they hadn’t been rescued Mr. Vuthy said.

Last weekend, Free the Bears opened the new home of Hope, 173 and five other sun bear cubs: A state-of-the-art nursery and quarantine facility for new arrivals, which cost $100,000. It is solar and biogas powered and includes its own wastewater treatment plant.

The opening was also an opportunity for Australian Mary Hutton, founder of Free the Bears, to look back at the NGO’s achievements since she first heard about the plight of the bears in China.

It all started, she said, back in 1993 when a TV station in her hometown, Perth, showed clips of an Asiatic black bear kept in a tiny cage so that its bile could be extracted.

“I was so disturbed by this, it was awful. The eyes of the bear told you everything. I thought that I need to do something,” Ms. Hutton said during an interview at Phnom Tamao.

In a shopping mall near her home, Ms. Hutton collected signatures for a “Free the Bears of China” petition, which was so successful that a member of parliament took the petition to Canberra.

“It sort of went from there. The phone kept ringing and people said they wanted to help. Then someone said, ‘Here is $50,’” Ms. Hutton said, adding that she then decided to found a charity, despite having no prior knowledge of bears or NGO work.

Asiatic black bears were saved from farms in China, and 15 years ago, Free the Bears started to work in Cambodia, where sun bears’ paws were a popular ingredient in soups, Ms. Hutton said.

“I got a phone call from a man who was saying, ‘I got three sun bears, can you help me?’ I said, ‘Sun bears, what’s that?’ He said he saved them from the restaurants because they get their paws hacked off to make soup,” Ms. Hutton, an elderly lady who clearly enjoys spending time with her cubs, said.

It took a year to find a place for the three rescued sun bears, but when they arrived at a zoo in Toronto, the media attention was enormous, and money poured in.

“I didn’t know what to do with all the money. So instead of shipping the bears to Canada or Australia, we decided to build an enclosure here,” she said.

Today, Free the Bears operates in Laos, Vietnam, Thailand, Borneo and India and has saved 173 bears in Cambodia alone.

Much has changed since Free the Bears started its operations in Cambodia, Ms. Hutton said. Sun bear paw soup disappeared from the restaurant menus and there is now an increased awareness of the importance of protecting the country’s wildlife, she said.

Thousands of dollars can be made from one single bear, said Mr. Vuthy, the organization’s program manager. “We get most bears from the wildlife trade,” he said, adding that many bears are also kept as pets as they are endearing while they are small.

“Generally, bears are not good pets, because they are strong animals. When they get older than six months, they start to hurt people and pull furniture apart. Then the owners make a tiny cage for them or sell them,” Mr. Vuthy said.

Globally, the trafficking of wildlife is estimated to amount to $20 billion annually.

Much like tigers, Ms. Hutton said, sun bears are a lucrative business.

“The soup used to be about $2,500 dollars, and a whole bear is worth several thousand,” she said.

Over the past three generations, the global population of sun bears declined by 30 percent, according to the International Union for Conservation of Nature, which classifies sun bears as vulnerable.

Although Hope and 173 enjoy their new enclosure, their fate is to die in captivity.

“If we would let them into the wild, they’d be caught in a snare. There are so many snares, that’s where most of the bears are rescued from. Some of them are missing paws, so they wouldn’t be able to survive in the wild anymore, and the others, we just have to protect them,” from poachers, Ms. Hutton said.

“Maybe in a few generations, the situation will be better, and they can be in their natural habitat again.”

Free the Bears has built a classroom at Phnom Tamao zoo specifically to educate visiting students about wildlife trafficking.