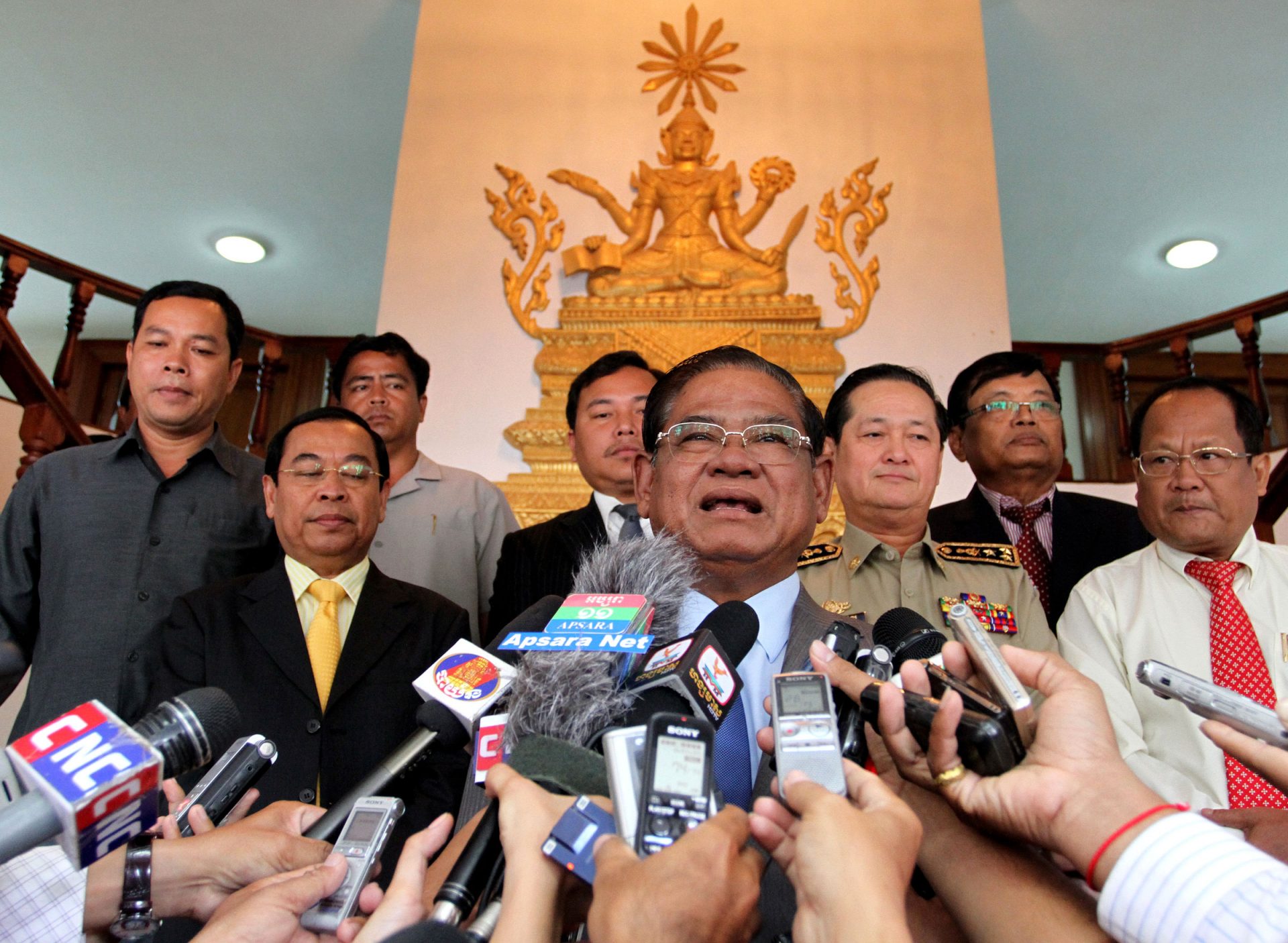 Interior Minister Sar Kheng on Monday warned of “trouble” if opposition leader Sam Rainsy does not return to the negotiating table to hammer out a solution to a stalemate between the CPP and the opposition over irregularities during the July 28 national election.

Mr. Kheng made his comments after he met privately and separately on Monday with the French and German ambassadors, and after the National Election Committee (NEC) said on Sunday that plans for an inter-party committee to investigate alleged election irregularities had been abandoned.

The CNRP, which also claims it won the election, is insisting on U.N. involvement in any committee looking into what they say was widespread electoral irregularities, a condition the NEC has refused to meet.

Mr. Kheng on Monday backed the NEC in their decision.

“I had a dialogue with Sam Rainsy by telephone, and told him that if we kicked out the NEC’s existing mechanism and tried to find an alternative, there would be more trouble,” Mr. Kheng said, flanked by officials at the Interior Ministry.

“There is no necessary condition requiring the participation of this or that person,” he said.

Mr. Kheng did not elaborate as to what “trouble” he was referring to, but added that the country’s national development could be adversely affected by the current standoff.

Mr. Kheng also said that the CNRP needs to be mindful of upsetting the peace, and that any demonstrations must ensure “that people can live in harmony and that investment projects and social development will run as normal.”

His meetings with the two ambassadors had centered on “election irregularities and social security after last month’s election,” he said.

In separate emails, German Ambassador Wolfgang Moser and French First Secretary Nicolas Baudouin said they could not comment on the content of their meetings with the minister.

It is not the first time that a high-ranking member of the ruling party has alluded to the possibility of instability in the wake of election results.

Prior to the election, Prime Minister Hun Sen repeatedly warned of a return to civil war or an era resembling the Khmer Rouge period if his long-ruling party should lose. After his party took a thumping at the polls on July 28, Mr. Hun Sen at first appeared conciliatory, but on Friday warned again of severe social chaos in Phnom Penh should the opposition demonstrate publicly.

CNRP spokesman Yim Sovann said his party had no intention of creating instability and insisted that following the law was of paramount importance to his party.

“What we have done is follow the law,” Mr. Sovann said. “We have done nothing against the law. Anybody who wants to recreate the Khmer Rouge regime is a criminal. The words that intimidate people should be avoided,” he said.

“Let the people judge—he [Mr. Kheng] shouldn’t talk about that—he is in charge of security, and he has the means to do it peacefully…. You control the Ministry of Interior, so you are responsible for anything that occurs during demonstrations.”

Protests, however, are a last resort for the CNRP, Mr. Sovann added.

The NEC issued its own statement pertaining to security concerns Monday, calling for the public not to listen to NGOs or the media until an official election result is reached.

“The dissemination of untrue information could confuse the public, which would spoil the environment and affect the social and security orders,” it said.

The CPP was the first to announce an election result, claiming that it had won the election with 68 seats to 55 seats for the opposition CNRP at 7:40 p.m. on the night of the election.