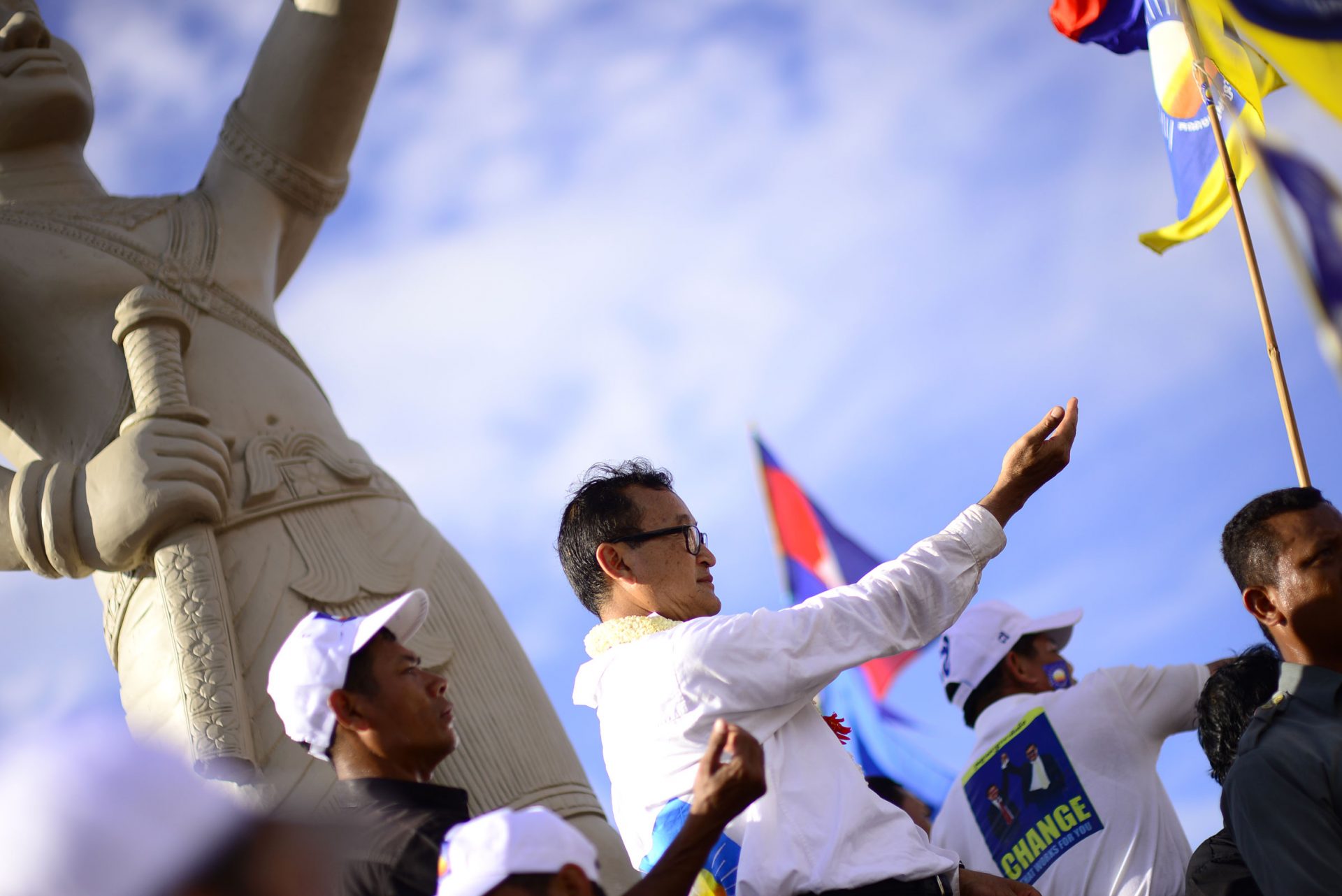 Both the National Assembly and the Constitutional Council of Cambodia, the highest legal authority in the land, convened closed-door meetings Thursday during which they decided not to reinstate opposition leader Sam Rainsy as a voter and parliamentary candidate for Sunday’s national election.

According to a copy of a letter sent Thursday to Mr. Rainsy and signed by National Assembly President Heng Samrin, the National Assembly’s Permanent Committee held a meeting to discuss a request made by Mr. Rain­sy on Tuesday that he be reinstalled as a lawmaker before the election.

“The permanent committee unanimously decided that be­cause Your Excellency has be­come president of the Cambodia National Rescue Party [CNRP], which doesn’t have any seats in the fourth mandate of the Nation­al Assembly, the Permanent Committee cannot offer validity, immunity and privilege for Your Ex­cellency,” the letter says.

Mr. Rainsy’s seat as a lawmaker for the Sam Rainsy Party (SRP) remained vacant after he fled the country to avoid an 11-year prison sentence in 2009 on charges that critics say were politically motivated.

Since then, the SRP has merged with the Human Rights Party to form the CNRP, a move which led the National Assembly’s permanent committee to strip 27 CNRP representatives of their parliamentary seats earlier this year.

Legal experts say that decision now means that no member of the opposition has lawmaker status, and so for Mr. Rainsy to regain his position would mean resigning as CNRP president and rejoining the now defunct SRP.

Mr. Rainsy’s letter to Mr. Samrin asking to be reinstated as a lawmaker was somewhat of a last ditch effort to allow him to run as a candidate in Sunday’s election.

The Constitutional Council of Cambodia on Thursday also held a special plenary meeting to discuss Mr. Rainsy’s request to the body on Wednesday to reinstate his registration on the voter list and allow him to run as a candidate in the ballot.

Constitutional Council spokesman Uth Chhorn said the decision was made after the body examined the Law on the Organizing and Functioning of the Constitutional Council and its amendments, and could not find a provision under which it could reinstate Mr. Rainsy as a candidate for Sunday’s election.

Mr. Chhorn said the decision was not politically motivated, and that the Constitutional Council was “a neutral and independent institution” simply exercising its functions as called upon to do.

After learning about the decisions, Mr. Rainsy said it only went to show how fearful the ruling CPP is of an upset on Sunday.

“In 2006 when I was pardoned, I got all my privileges back, but this time they have done it differently, so I think this shows they are very frightened of the CNRP,” he said. “The legitimacy of the election was already called into question. I think this is now the last straw that breaks the camel’s back.”

“What is an election where a prime minister does not face a challenger? I think the whole world will laugh when he says he is the victor of the election,” he added.

CNRP spokesman Yim Sovann also claimed that the two decisions against Mr. Rainsy would inevitably call into question the legitimacy of the results of Sunday’s election. “The elections will not be free and fair at all,” he said. “Of the 18 points of recommendation given by [U.N. human rights envoy] Mr. Surya Subedi, not even one has implemented.”

Mr. Sovann was referring to a report released last July by Mr. Subedi that called for major reform within the National Election Committee as well as the return of Mr. Rainsy to ensure “a level playing field for all political parties to compete on an equal footing.”

Council of Ministers spokes­man Phay Siphan defended the decisions and said they had been made according to “due process.”

“A lot of people complain the election will not be free or fair because of one person. There is 14 million more people in Cambodia and everybody is equally important under the law,” he said. “Sam Rainsy is just one person; he’s a regular person.”