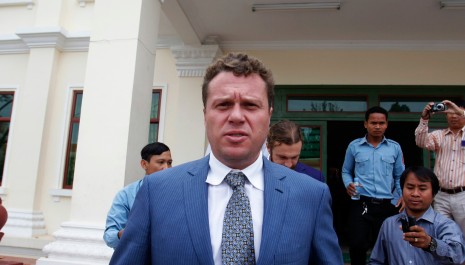 The Court of Appeal on Monday freed Russian businessman Sergei Polonsky, who faces trial in his home country on multimillion-dollar embezzlement charges, and suspended his extradition to Moscow, saying the 41-year-old property developer must first face a Cambodian court for his role in a 2012 assault case.

Mr. Polonsky, who greeted the court’s convenient ruling with joy, has vigorously fought his extradition to Russia and has promised to invest hundreds of millions if he is allowed to stay here.

Making his fortune in Russian real estate before losing most of his billions in recent years, Mr. Polonsky denies the charges against him in Moscow and has said he will not receive a fair trial there because the complaints are politically motivated.

Shortly before his arrest in November, Mr. Polonsky posted on his Facebook page a video clip allegedly showing a senior Cambodian police official demanding $1 million to see to it that he be allowed to stay in Cambodia and avoid extradition.

“We decided to suspend his extradition because we want to leave him for his case in Preah Sihanouk Provincial Court,” Appeal Court presiding Judge Seng Sivutha said Monday.

“We heard the [Preah Sihanouk] court will hear this case at the end of this month,” he said.

The Preah Sihanouk Provincial Court in January 2013 charged Mr. Polonsky and fellow Russians with assault after they allegedly threatened six Cambodians with a knife and forced them to jump from a boat off the Sihanoukville coast on December 30, 2012.

Mr. Polonsky was imprisoned for the incident, but granted bail in April. In July, a Russian court charged Mr. Polonsky in absentia for his alleged role in embezzling $176 million from some 80 investors in a Moscow construction project. He was placed on Interpol’s Most Wanted list in October and arrested trying to evade capture on Koh Rong, off the coast of Sihanoukville, in November.

During Monday’s five-minute closed-door hearing, which reporters watched from behind a window in the door, Mr. Polonsky stood and did not speak, but he gave a large smile as the presiding judge read the court’s decision.

Emerging from the courtroom, the cheerful Mr. Polonsky, dressed in a gray suit and light purple button-down shirt with no tie, said he planned to begin a large-scale development project in Cambodia now that he is free.

“I now need some time to think and move forward. I am staying in Cambodia, waiting for the other case to start, and deciding…to start a project in Kampuchea, a big development. It’s a big project with eight islands and worth about a minimum $800 million. Maybe in a maximum two months, I will present the project.”

During his initial Appeal Court hearing on Thursday, Mr. Polonsky said that if he were allowed to stay in Cambodia, he would invest up to $1 billion in the country.

Mr. Polonsky has been relatively tight-lipped about his future investments, though he has said he has been working on a project known as Polonium.

One of Mr. Polonsky’s lawyers, Benson Samay, said his client would remain in the country “to help Cambodia.”

“He will stay to help Cambodia because he is a very kind person, and I will find him a wife in Cambodia,” Mr. Samay said, adding that Cambodia does not have an extradition treaty with Russia, so the country is not legally obliged to send Mr. Polonsky to Moscow.

In previous interviews with Mr. Polonsky, he has said that if he were sent back to Russia, he would not be able to receive a fair trial because his former business partners have political connections.

Mr. Polonsky, however, could face extradition in the future, according to Mr. Sivutha, the Appeal Court’s presiding judge.

Upon the news of Mr. Polonsky’s release, Russian media Monday said the country’s Interior Ministry has requested additional information about the Cambodian court’s ruling, and if true, would likely continue to seek his extradition.

Calls and an email on Monday to the Russian Embassy in Phnom Penh went unanswered.