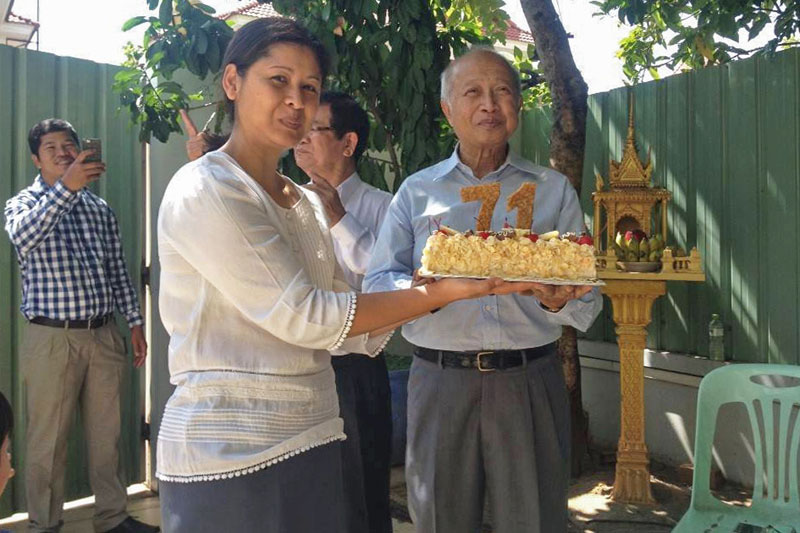 Ranariddh to Return as Funcinpec President

Prince Norodom Ranariddh, who led the Funcinpec party to victory in the 1993 U.N.-run election, is set to return as president of the struggling royalist party less than a year after launching his own rival party, according to a statement released Thursday night by Funcinpec.

The decision was described as “a sad day for Funcinpec” by Prince Sisowath Sirirath, a member of the party’s permanent committee and its former vice president.

A statement released Thursday, signed by Funcinpec Secretary-General Nhiek Bun Chhay and current party president Princess Norodom Arunrasmey, said the prince would return to the presidency of Funcinpec to allow for the “reconciliation of royalists and Sihanoukists.”

“We want the royalists to be reunited and we do not want the voices to be split up,” Mr. Bun Chhay said.

“We had a meeting this morning and decided that we asked the prince to come back to Funcinpec,” he said. “This is for the sake of reconciliation; us uniting as a single party is better than us staying separated.”

“We will hold a congress to elect him as president this month. He agreed to accept our proposal. This is a reward for the new year—reunion,” he said.

Mr. Bun Chhay, who engineered Prince Ranariddh’s removal as Funcinpec president in 2006, said he did not believe there would be any trouble in asking Princess Arunrasmey to step aside.

“The important thing is that they are the children of His Majesty [the late King Norodom Sihanouk] and they need to unite,” he said.

A separate statement released by Prince Ranariddh said he would accept the position of Funcinpec president.

“I have the great honor and delight to agree to be the president of Funcinpec, as requested by Samdech [Princess Arunrasmey] and Your Excellency [Mr. Bun Chhay], to continue to lead our party again,” the prince said in the statement.

Prince Ranariddh served as first prime minister between 1993 and 1997, when he was ousted in factional fighting with then-Second Prime Minister Hun Sen. He returned to the country a year later to serve until 2006 as National Assembly president in coalition with the ruling CPP.

On Mr. Bun Chhay’s initiative, the prince was ousted from Funcinpec’s presidency in 2006, and went on to establish his own Norodom Ranariddh Party. The party won two National Assembly seats in the 2008 national election.

In March last year, nine months after Funcinpec for the first time failed to pick up a single seat in a national election, Prince Ranariddh established his new Community of Royalist People Party. He said the party would revive royalist politics from the creeping republicanism of the opposition CNRP and the unpopularity of Funcinpec.

Prince Sirirath, an outspoken member of Funcinpec’s permanent committee, denounced the return of Prince Ranariddh, who has derided Funcinpec as a spent force over the past few years.

“A solution has been imposed on us. It’s very sad. I don’t think an imposed solution can help reconciliation among Funcinpec people,” said Prince Sirirath, who served as Cambodia’s ambassador to the U.N. in the 1990s.

“It is a great calamity for us. Politicians need to keep their words. Once you have set everything out, and then you have to swallow your own words, I don’t think you are a good leader,” he said.

The prince declined to say who had imposed Prince Ranariddh’s return to Funcinpec, but said the return of one of the party’s biggest critics made no sense.

“It is a sad day for Funcinpec. The prince wants to lead Funcinpec, which he has condemned on every occasion, [saying] that ‘Funcinpec is zero,’ in his own words. So why does he want to come back?”

Prince Sirirath added that Prince Ranariddh’s ascension to the Funcinpec presidency still depends on him being voted into the position at a party congress.

“Why in the first place did we depose Prince Ranariddh? If we did, we should keep him out; it means that we do not need him,” he said.

Prince Ranariddh could not be reached for comment last night. His cabinet chief, Ma Chorn, said he was unaware of the prince’s planned return to Funcinpec.

His former cabinet chief, Noranarith Anandayath, who late last year defected from the Community of Royalist People Party to the ruling CPP, said the prince had held talks about returning to Funcinpec “many times” throughout 2014.

“He knew very well that his political ambitions are becoming more and more marginalized, so he needs to really put his actions where his mouth is,” Mr. Anandayath said. “If he wants to galvanize the royalists, he must first begin by going back to lead the Funcinpec.”

Mr. Anandayath said he hoped Prince Ranariddh could turn over a new leaf with his return to Funcinpec, and avoid the mistakes that led to his past ousters from the party and the slow disintegration of the royalist political movement.

“There were many lessons and I hope he can learn from his past mistakes,” he said. “I hope the new version [of Prince Ranariddh] can encourage other people that were disenchanted with him to come back.”