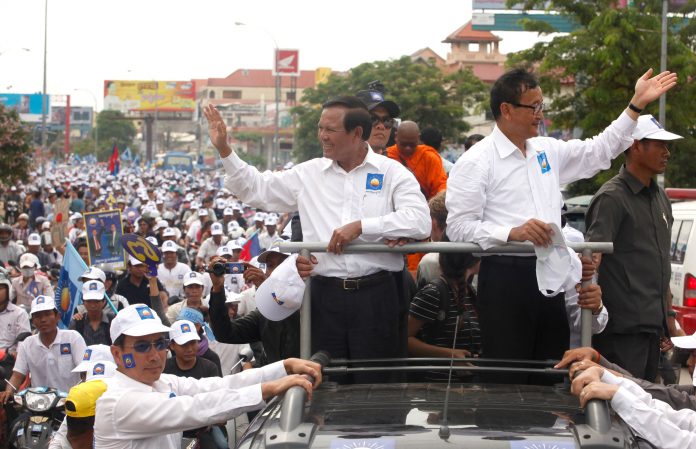 SIEM REAP CITY/KOMPONG THOM CITY – Opposition leaders Sam Rainsy and Kem Sokha led a parade of more than 20,000 supporters on Wednesday through the streets of Siem Reap City in what was the second-largest turnout for an opposition rally since Mr. Rainsy landed in Phnom Penh on Friday.

Under a deal with the government, ticketing at the Angkor Wat temple complex is controlled by the Sokimex group, which is headed by well-connected businessman Sok Kong. In U.S. diplomatic cables from 2007, which were leaked by anti-secrecy group Wikileaks in 2011, Sok Kong is said to have returned to Cambodia shortly after the Khmer Rouge fell and made his fortune through close business connections with Vietnam.

Nonetheless, after nearly four years living outside of the country to avoid an 11-year prison sentence, which he said was politically motivated, Mr. Rainsy has seen an outpouring of support since his return following a Royal Pardon. And if Mr. Rainsy seemed a bit taken aback when he first addressed supporters at Phnom Penh International Airport on Friday, he has now settled in to being the country’s leading voice for change in government.

“We are full. We have been eating samlor mchou yuon [Vietna­mese sour soup] for 30 years. This time we need to eat samlor kor kou [a traditional Khmer soup],” Mr. Rainsy told the crowd in Siem Reap City, to much amusement.

Aside from the new party name and logo, bigger crowds and the constant companionship of Mr. Sokha, Mr. Rainsy has in many ways picked up where he left off after his 2008 election campaign, in which the SRP won 26 seats in Parliament.

Each of his addresses this week have started with the proclamation “I am Sam Rainsy,” and, occasionally pushing up his trademark black-rimmed spectacles, his favorite rhetorical device appears to be stoking nationalist—and often anti-Vietnamese—sentiment.

But the 64-year-old former finance minister has also integrated a number of pressing social and environmental issues into his speeches.

Rather than talking about Prime Minister Hun Sen’s government ceding land along the Vietnamese border, claims that were at the center of the convictions against him in 2009 and 2010, he has been decrying the government’s granting of massive economic land concessions and escalating deforestation.

“People are losing their homes and farmland and if we look at the forests they are cutting them all down. They [Mr. Hun Sen’s government] are giving 90-year land concessions to the foreign companies, especially Vietnamese companies,” he told a cheering crowd of hundreds gathered Wednesday afternoon in Kompong Thom City.

“We [the CNRP] do not agree with this. We have to kick the Vietnamese out and we will collect our property back,” he said.

And to appease an expanding constituency of young voters, who have turned out on their motorbikes in droves for Mr. Rainsy’s major rallies, job creation has also been a recurring theme in his speeches.

“I have seen that the economy of Mr. Hun Sen is headed the wrong way. Cambodians have no jobs to do and migrate oversees to Thailand,” he told CNRP supporters in Battambang City on Tuesday.

“I have communicated with sen­ior international [businessmen] and I assure you I will have big international companies with capital, high technology and ex­pertise to open factories that create jobs in Cambodia for Khmer youth,” he said.

With a notably darker complexion than he had upon arriving in Cambodia just six days ago, Mr. Rainsy will campaign for two more days through the provinces before Saturday, when campaigning will come to an end for one day of calm prior to election day.

Today Mr. Rainsy and Mr. Sokha are scheduled to make stops in Svay Rieng and Prey Veng provinces, and will continue on Friday through Kompong Cham province before returning for a final rally in Phnom Penh the same day.