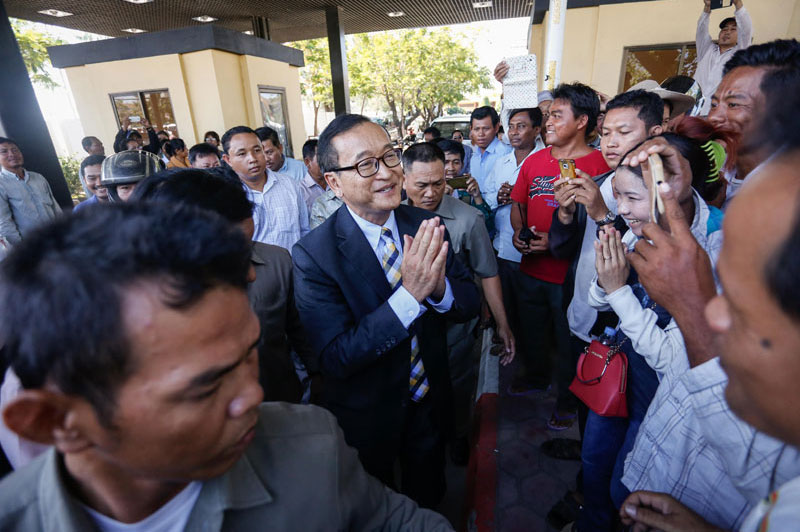 Opposition leader Sam Rainsy returned from an extended trip abroad Wednesday saying that he would accept Prime Minister Hun Sen’s challenge to swear on his life that the July 2013 national election was “stolen” by the CPP, adding that a systematic vote recount could be more useful.

In a speech on Monday, Mr. Hun Sen challenged Mr. Rainsy to join with him in a ceremony at Phnom Penh’s Preah Ang Dangker shrine to take an oath that he should “die through bullets, lightning and everything” if the CNRP’s claims about the 2013 election being rigged are wrong.

Speaking at the Phnom Penh International Airport upon his return from a monthlong trip meeting with expatriate Cambodians living in Europe, Canada and the U.S., Mr. Rainsy said he would accept Mr. Hun Sen’s dare.

“An oath is no problem, anytime for an oath is OK,” the opposition leader told reporters. “But what is necessary is we have to do everything technical too.”

“An oath is superstitious, but we have to focus on the technical and scientific if we want to verify whether the last election was accurate,” he said. “We should recount the ballots immediately, and we will see things in black and white.”

CPP spokesman Sok Eysan said it would be up to Mr. Hun Sen and Mr. Rainsy to schedule a time to go to the Preah Ang Dangker shrine, located along the riverside in front of the Royal Palace, but that an election recount would be impossible.

“It’s too late. If they want a recount of the election, there should be a re-election, and the re-election can be in 2018,” Mr. Eysan said, referring to the next scheduled national election.

“It is impossible because we are moving forward already; for a recount, it means get out of the National Assembly and protest again on the street.”

Koul Panha, executive director of the Committee for Free and Fair Elections in Cambodia, said Mr. Hun Sen’s dare, which includes a pledge to swear on his own life and that of CPP members that the election results were legitimate, would be a strange way to certify the ruling party’s victory.

Mr. Panha said the forms filled out by polling booth officials around the country on July 28, 2013, and sent to Phnom Penh for the collation of results ought to be released publicly to show whether the official results are correct.

“In order to restore the trust of the nation, it’s not about swearing on their spiritual beliefs, it’s about transparency and accountability,” Mr. Panha said. “It’s transparency that makes the people confident in the election result.”

“There is no oath-taking about results in any election law in the world. Instead they need to disclose all the information: the election results from each polling station,” he added.

“In some countries, you can verify this on the election commission website, but here they only released a few where the result was very close,” he said. “You cannot convince the citizens to trust you when you keep the information close but say that you will swear on the result.”

Mao Pises, president of the opposition-aligned Federation of Cambodian Intellectuals and Students, said he agreed with Mr. Panha’s stance, but said Mr. Hun Sen’s election exercise could be useful—even offering to take Mr. Rainsy’s place if the CNRP president opted out.

“After the election, the CNRP accused the CPP of stealing the election and asked the National Election Committee to open the safety packages across the country, but the CPP, through the NEC, did not do it,” Mr. Pises said in reference to boxes containing the polling booth results.

“I am Buddhist and, as you know, the Cambodian people who follow Buddhism believe our ancestors and especially our heroes and spirits have power here, and will kill or destroy those people who destroy our nation,” he said.

Asked whether he thought Mr. Hun Sen could in fact die if the prime minister swore on his life and that of CPP members, Mr. Pises said he believed it was possible.

“Yes, why not? Now Chea Sim has gone already,” he said, referring to the long-serving CPP president who died hours after Mr. Hun Sen’s speech on Monday.

Mr. Rainsy’s return Wednesday marked the end of a trip abroad to convince expatriate Cambodians of the value of his new “culture of dialogue” with Mr. Hun Sen, which is meant to promote a more civil political atmosphere in Cambodia after years of bitter fighting.

“Mostly they understood and they supported it but a few people did not clearly understand it, and they are monitoring it,” Mr. Rainsy said at the airport.

Previous articleOfficials Tell Fishing Community to Float Away
Next articleComments on Vietnam Wrongly Attributed, But the History Is Clear