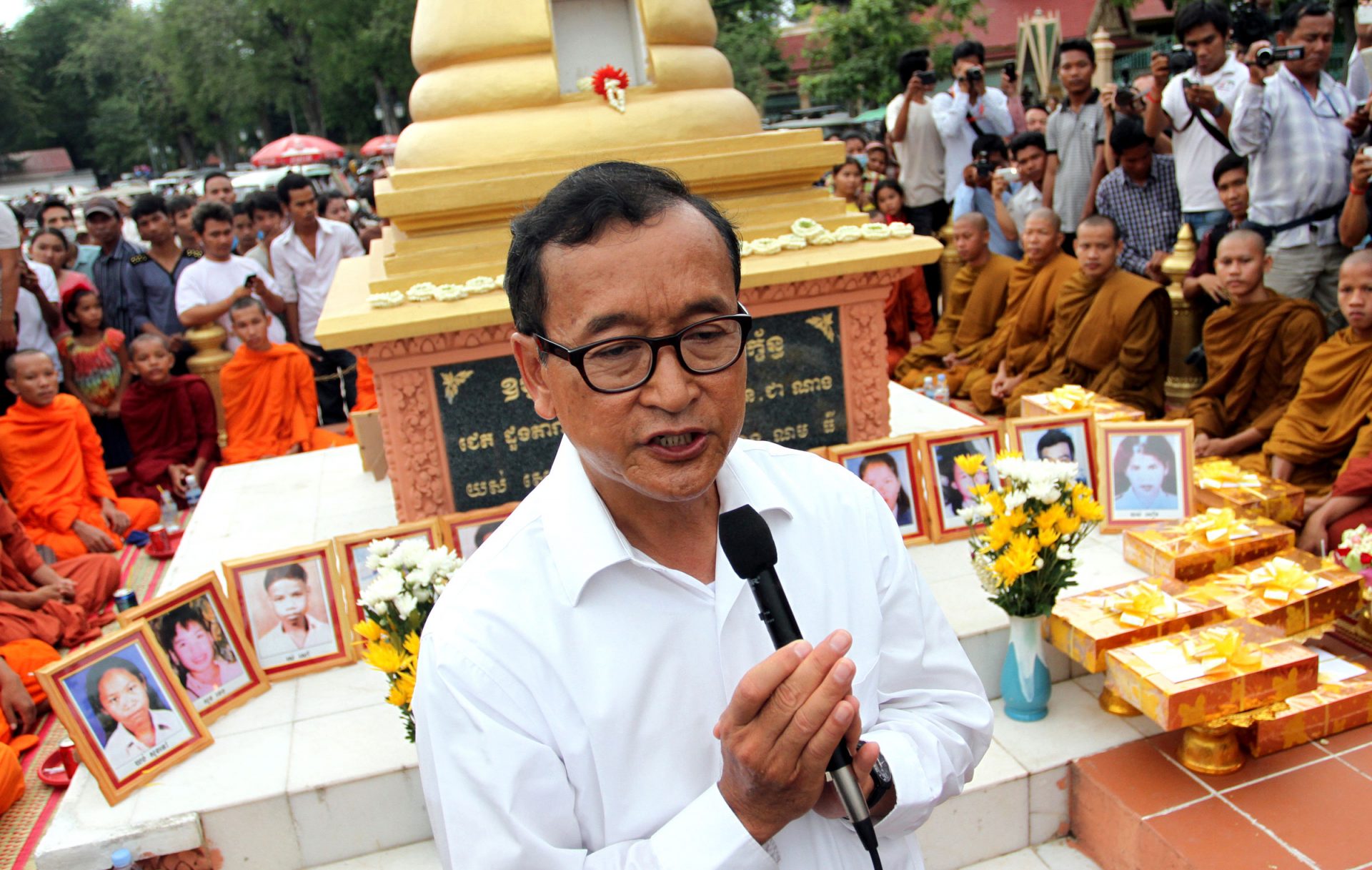 Returning to the park where a grenade attack killed 16 of his supporters in 1997, opposition leader Sam Rainsy on Tuesday spoke at the stupa in central Phnom Penh that memorializes the men, women and children who were murdered in one of the biggest single cases of violence against civilians since the Khmer Rouge.

It was the first time that Mr. Rainsy had returned to the memorial since he left the country in 2009 to escape an 11-year jail sentence for which he has since been pardoned. No one has been held accountable for the attack, which also injured at least 100 people attending an opposition rally outside the National Assembly.

Speaking to a crowd of about 800 people surrounding the stupa, Mr. Rainsy said that his CNRP would soon deliver victory to the opposition supporters who had given their lives fighting to make the country “clean, free and just.”

“I believe that with our victory [everyone] will come to see the light, in just several days or several weeks,” Mr. Rainsy told the cheering crowd, surrounded by dozens of members of the media.

“In just several days or weeks, the hero demonstrators that sacrificed their life for the nation, for democracy, they will see our victory and come to congratulate us,” he said.

“Everything we have done and continue doing is to end the bad behavior by powerful people using their dictatorship to make good citizens suffer, make the people weak and kill Cambodian people,” he said.

Mr. Rainsy, who has long blamed Mr. Hun Sen for the attack, filed a lawsuit against the prime minister with the Phnom Penh Municipal Court in 2005 that the court dropped.

Later, Mr. Rainsy himself had a lawsuit he filed against Mr. Hun Sen in the U.S. suspended so that the government would drop defamation convictions against him, allowing Mr. Rainsy to return to the country and stand in the 2008 national election.

The U.S.’ FBI closed its own investigation of the attack, prompted by the injury of a U.S. citizen, in 2005 without drawing any hard conclusions, but FBI files later released under the Freedom of Information Act pointed a heavy finger at forces loyal to the CPP.

While Tuesday’s event remained largely ceremonial, with Mr. Rainsy, his wife, opposition politician Tioulong Saumura, and other CNRP members joining a dozen monks for about 30 minutes of prayers, a few campaign cheers for change arose from the audience before the crowd dispersed.

CNRP parliamentary candidate Mu Sochua, who joined Tuesday’s ceremony, said that Mr. Rainsy’s appearance was not made out of a desire for publicity but was a reminder to “people close to the party” of the enduring strength of Cambodia’s opposition movement.