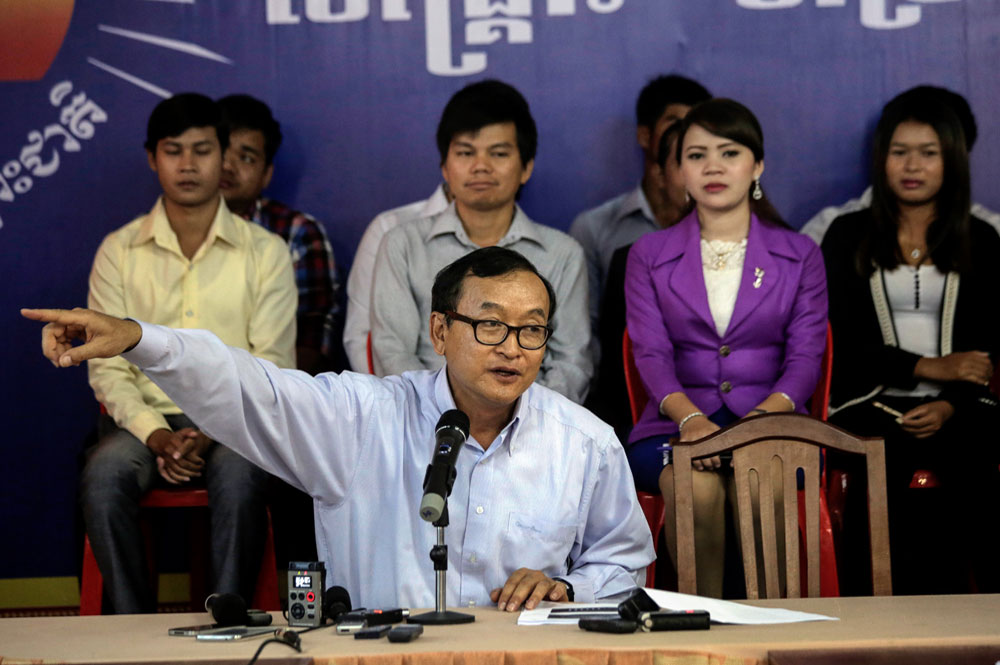 Opposition leader Sam Rainsy on Tuesday called a press conference and hosted a garden party at the CNRP’s headquarters in Phnom Penh to announce that his Facebook page has received one million “likes” since its creation in April 2013.

The figure was reached at midnight on Monday, Mr. Rainsy said, noting that it puts him in the company of former French President Nicolas Sarkozy, Burmese opposition leader Aung San Suu Kyi and former U.N. Secretary-General Kofi Annan, whose pages have also received about one million “likes.”

Mr. Rainsy said the popularity of his page had been instrumental in convincing him to return to Cambodia in July 2013 after his four years in exile, and even more crucial in the CNRP’s success in that month’s election.

“News is knowledge, knowledge is power, and power is meant to serve the people,” he said at the press conference.

“This is our spirit—we do not have weapons or soldiers, we are not going to fight to spill blood between Khmers. This is a competition dependent on news, knowledge and intelligence.”

Mr. Rainsy presented slides showing that 48 percent of his Facebook fans are aged between 18 and 24, and noted that even the team producing his page’s content are youths.

“Sam Rainsy could not do any of this without all these colleagues,” he said, gesturing to a team of eight seated behind him, including Sambat Rose Marya, the host of a 20-minute daily news show on his page, and Pen Putsaphea, his lead reporter.

Mr. Rainsy said his Facebook team closely monitored the page to ensure comments replying to his many daily posts do not contain content such as the often defamatory cartoons of CPP leaders popular among CNRP supporters online.

“We respect a code of ethics and we ban anything offensive, disgraceful, completely useless…and we call on our followers not to post anything that would be insulting and to [have] mutual respect with those who disagree with us,” he said.

“We don’t want to give pretense to some people in the government who would take this pretense to crack down or stop social media, to prevent social media from expanding.”

Mr. Rainsy also shared some basic statistics about his page, saying that 70 percent of Facebook users who have “liked” his page are men and only 30 percent are women.

Competing with Mr. Rainsy for the most popular Cambodian page include the Voice of America-Khmer, which tops the list with 1.2 million fans as of last night, Royal Group’s MyTV, which had 670,000, and pop star Meas Soksophea, who had 630,000.

Before starting his garden party Tuesday, Mr. Rainsy told the press conference that his online presence would continue to be central to his campaigning in the lead- up to the next election.

“On the contrary, authoritarian regimes want to hide the truth, want to distort facts, and want people to remain ignorant so they don’t have critical views, so I think technological trends are very favorable…to the strengthening of democracy.”