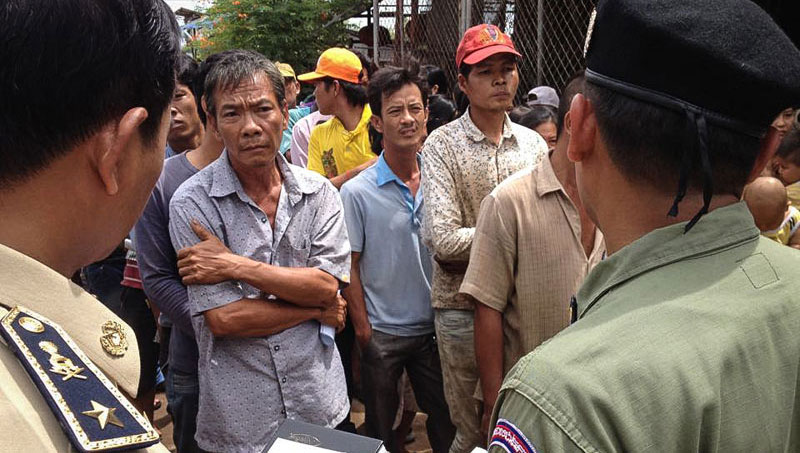 Racism on Display in Immigration Raid

Police from the Interior Ministry’s general department of immigration on Thursday detained more than 100 Vietnamese men working at a metal scrapyard in Phnom Penh to assess the legitimacy of their employment in Cambodia. What the officers left behind was a community of confused and frightened families.

More than 40 immigration police surrounded the scrapyard in Chbar Ampov district at about 10 a.m. before scouring the location for alien laborers. By 2 p.m., 109 men had been loaded into the immigration department’s vans and transported to a holding compound near Phnom Penh International Airport, where the legality of their presence and employment in Cambodia was checked.

“We found that there were 11 people who did not have any documents and face deportation,” Uk Heisela, the department’s chief of investigations, said Thursday evening.

Of the rest, “some of them had residency books, some showed birth certificates or family books and another group had Khmer identity cards,” he said. The National Police would decide the fate of those 98, he said.

Major General Heisela said his department has deported 2,423 foreigners found to be living illegally in Cambodia since it was formed in April 2014—2,122 of them Vietnamese.

The department’s raids are carried out seemingly at random, and as the 109 men were taken from the scrapyard Thursday, those left behind were evidence of the inconsistent nature of the crackdown.

“They took my family but they left me because I am so sick,” said Sok Ly, 39, a mother of five who was born in Prey Veng province to Vietnamese parents.

Ms. Ly said police detained her husband and two adult sons, leaving her alone with her three younger sons, aged between four and 11.

“My husband, he was born in Kompong Cham, he is Khmer, but we don’t have the documents because we lost everything in a fire about eight years ago,” she said. “Please, I hope they bring my husband and children back. I have diabetes, I need them.”

After police left the scrapyard—a mini-city of twisted metal and deconstructed machinery—those who survived the shakedown gathered to take stock of their families. They said officers had scooped up migrants with permission to work in Cambodia and those unlucky enough to be shopping at the scrapyard during the raid, while sparing others with no right to be in the country.

“We came here to buy materials for our home, but now they have taken my husband and he is gone,” said Keo Davan, 29.

Nang Sok Ly, 35, who produced a Cambodian ID card for both police and reporters, said he had been drinking coffee at a roadside stall with two visiting sisters-in-law when the immigration officers showed up.

“They have the documents, but not with them, because they don’t live or work here,” he said. “The police arrested them, too.”

“They got almost every Vietnamese person in here. It’s shocking, frightening,” he added.

In April, the Interior Ministry published a price list for its services, ostensibly to minimize corruption. A Cambodian ID card, according to the ministry, costs $2.50.

Kmao Dop, 42, a scavenger born in Takeo province to a Vietnamese father and Cambodian mother, said his ID card had kept him out of the police vans.

When immigration police raided Phnom Penh’s Koh Pich island on Tuesday, they whittled down potential targets for deportation by asking construction workers if they were Cambodian. Depending on their accent, they were either set free or held for further scrutiny.

In an interview Thursday, an immigration officer who spoke on the condition of anonymity because he is not authorized to speak with the media, gave further insight into how illegal immigrants are vetted.

“The Khmer Krom, they are free to go,” he said, referring to people with roots in Southern Vietnam.

“Even if they only have the Vietnam ID, we can tell by their face and their speech that they are Khmer,” he added. “No problem.”

While Ms. Ly, the sick mother, waited at her home last night in the hope that her husband would return from the holding facility, Maj. Gen. Heisela assured reporters that she would not be left to fend for herself should her husband be deported.

“We would not do that,” he said. “If we deport him, we will also go and pick her up and deport the whole family together.”