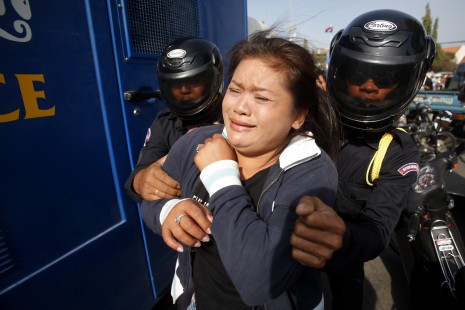 The government’s ban on public protests and demonstrations could be around for quite some time, at least as long as the present political standoff lasts between Prime Minister Hun Sen’s ruling CPP and the opposition, a top military police official said Tuesday.

On January 4, the day after military police put down a protest for higher garment factory wages in Phnom Penh by fatally shooting five demonstrators and wounding dozens, the Interior Ministry said it was suspending the constitutionally-protected right to peaceful protests “until security and order are restored to their normal state.”

But Mr. Hun Sen’s officials have not explained just what they mean by “normal state.”

The CNRP is boycotting the Assembly in protest over July’s national election, which was officially won by the CPP but remains marred by evidence of widespread irregularities. The CNRP wants Mr. Hun Sen to agree to an independent investigation of the vote, to call fresh elections, or to step down. The prime minister has said no to each demand.

With neither side backing down, the parties appear as far from a detente as ever.

Phay Siphan, spokesman for the Council of Ministers, said the ban on protests would “not necessarily” end even if the CNRP did take its seats, as it was imposed not in response to the opposition only but to “troublemakers” in general.

“Normal means, exactly, we have to come back [to conditions] before the election,” Mr. Siphan said. Normal, he added, was “when the people feel confident that streets no longer [will be] blocked by protesters.”

The CNRP suspended its protests and marches around Phnom Penh when the ban took effect, the same day police and plain-clothes government thugs wielding metal pipes broke up a pro-opposition camp in the middle of the city, beating monks and civilians as they fled.

Other groups with grievances against Mr. Hun Sen’s CPP government have continued to demonstrate, and police have enforced the ban selectively.

At a press conference Tuesday, CNRP President Sam Rainsy called Brig. Gen. Tito’s claim that the ban would end only when the opposition joined parliament “senseless.”

“They suspend the people’s constitutional right to demonstrate, to protest…and they say they will [not] lift the ban unless the CNRP take its seats in the National Assembly…. There is no logic whatsoever,” he said.

Mr. Rainsy said the external pressure would come from the likes of the U.S. and the European Union, where lawmakers have been putting pressure on Mr. Hun Sen’s government to agree to an independent investigation of the elections.

Critics of the ban are calling it illegal because it suspends a clause in the Constitution—the right to peaceful demonstration—without going through the legal process of altering the Constitution, which requires a vote of the National Assembly and the endorsement of King Norodom Sihamoni.