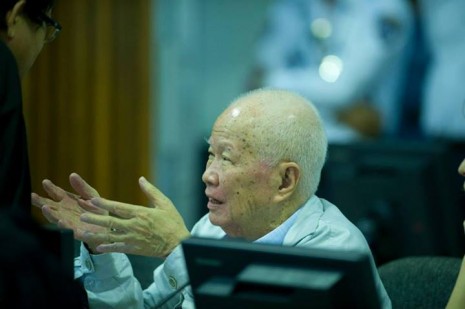 Prosecutors on Monday asked judges at the Khmer Rouge tribunal to sentence former regime leaders Nuon Chea and Khieu Samphan to life in jail for committing crimes against humanity that included the forced evacuation of Phnom Penh, the forcible transfer of people to labor camps and the execution of Khmer Republic soldiers and officials at a site in Pursat province.

Summing up three days of detailed and lengthy closing statements, Deputy Co-Prosecutor William Smith argued that Nuon Chea, 87, and Khieu Samphan, 82, were part of what he called a massive “Joint Criminal Enterprise” that targeted officials from Lon Nol’s Khmer Republic re­gime and discriminated against and enslaved the urban population.

Trial Chamber President Nil Nonn then ordered Nuon Chea—who has spent the majority of the case’s closing statements in his holding cell—to be brought into the courtroom to hear, along with Khieu Samphan, what sentence national lead Co-Prosecutor Chea Leang proposed.

“The impact of the regime re­mains to this day,” she told the judges after a solemn-looking Nuon Chea, his eyes shielded by his trademark sunglasses, was in his seat.

“Based on the Law on the Extraordinary Chambers in the Courts of Cambodia to prosecute crimes committed during the period of Democratic Kampuchea, the prosecution requests the Trial Chamber and your honors to punish Nuon Chea and Khieu Sam­phan with life imprisonment, which is the only punishment that they deserve and that is the international standard for these crimes as well,” Ms. Leang said.

Ever since closing statements began last week, prosecutors have vehemently argued that there is enough evidence that Nuon Chea and Khieu Samphan are guilty of the crimes with which they have been charged as part of this stage in the case against them.

Mr. Smith told the court yesterday that the leaders of the Communist Party of Kampuchea (CPK) were “so obsessed with enemies” that large percentages of people were swept up and purged in a wave of paranoia that came to engulf the party.

He said that although the de­fense teams would try to persuade the court that killings were carried out by autonomous, lower-ranking officials, meeting minutes, documents and interviews with the men themselves indicate that this was not the case.

“Who is Nuon Chea; what did he do and what does he represent?” Mr. Smith asked, adding that questions put to witnesses by Nuon Chea’s national counsel, Son Arun, about his character were largely meaningless to his defense.

“We have many layers and the face of a killer can be hard to see,” he continued. “Those responsible for death on a large scale rarely reveal their darker sides in public. History has certainly taught us that political leaders may profess to love their country very much, but be capable of horrific crimes.”

Nuon Chea was an “extremist” then and remains an extremist today, based on his statements in court, Mr. Smith argued.

“He is a bitter man who sees spies, the CIA and the KGB lurking around every corner,” he said, adding that Nuon Chea’s take on human rights was the right to “take up arms to fight an enemy.”

“This is a man who was willing to kill his own relatives and revolu­tionary brothers who he fought alongside for years if he suspected they were not loyal to the party; someone who in Pol Pot’s eyes, was ‘too hard line.’

“There are few graver threats to humanity than those posed by those so blinded by ideology, beliefs or religion that they are willing to do anything by whatever means no matter how destructive or unlawful to achieve their goals,” Mr. Smith added.

He went on to explain that Nuon Chea was a critical part of the CPK’s swing from left-wing revolutionaries “to war criminals responsible for the deaths of hundreds of thousands of Cambodians.”

And despite having been once open about his past in a videotaped interview, Nuon Chea had no intentions of being so open with the court, he said.

His legal team’s argument—which is due later this week—that intellectually limited Nuon Chea was far from a chief ideologue “is perhaps the saddest and most desperate of lies,” Mr. Smith said.

He argued that university educated Nuon Chea, who was fluent in at least three languages, was more than capable of holding his own at diplomatic meetings and on establishing the party’s hard-line policies.

Mr. Smith also picked holes in the defense of Khieu Samphan, who “has presented himself as a man who fell into the CPK by accident.”

“He rose to the highest echelons, but remained blissfully unaware of plans implemented by his colleagues,” Mr. Smith said with a clear sense of irony.

“He was the only man in all of Cambodia who knew nothing, saw nothing and heard nothing,” he continued.

Instead, Mr. Smith said the evidence points to a man who is, in fact, a “skillful and manipulative member of the core leadership who had a thirst for ab­solute power and who, with Pol Pot and Nuon Chea, approved the use of violence to accomplish that power, who called for execution of innocent people and who believed it was right to destroy all those who stood in the way of the CPK.”

He said no amount of arguing otherwise could convince prosecutors to believe that Khieu Samphan was anything but a key cog in the machine that saw cities emptied out and death on a widespread scale. Khieu Samphan’s reality in the CPK was not one of being confined to an office, but one that included jovial reunions with his comrades, who would laugh and tell jokes while their countrymen toiled and starved.

“Khieu Samphan is no fool,” Mr. Smith said. “He was very much involved in the crimes and shared Pol Pot’s and Nuon Chea’s vision.”

Of the few surviving minutes for 19 Khmer Rouge meetings that were held, Khieu Samphan was present for 16—an attendance rate of 84 percent, he said.

Mr. Smith said that there is evidence beyond a reasonable doubt that the co-accused were inextricable parts of the “Joint Criminal Enterprise” that was the Khmer Rouge regime and that their individual actions contributed to a wider set of interconnected crimes.

Heather Ryan, a tribunal monitor with the Open Society Justice Ini­tiative, said the terms of im­prisonment sought by prosecutors were “not at all unusual under the circumstances.”

“Given that the Supreme Court Chamber increased [S-21 jailer] Duch’s prison sentence when it was originally less than life, there is more of an argument for the more senior leaders that they would serve longer sentences,” Ms. Ryan said.

“It is symbolic to say that a life sentence is appropriate, when you have people who have a short life expectancy. It is a kind of standard and practice that has been established in the field of international criminal law.”

Another reason why the life sentences were suggested “is because the accused did not show remorse or in any way cooperate with the prosecution.”

The defense for Nuon Chea is scheduled to make their closing statements Tuesday.