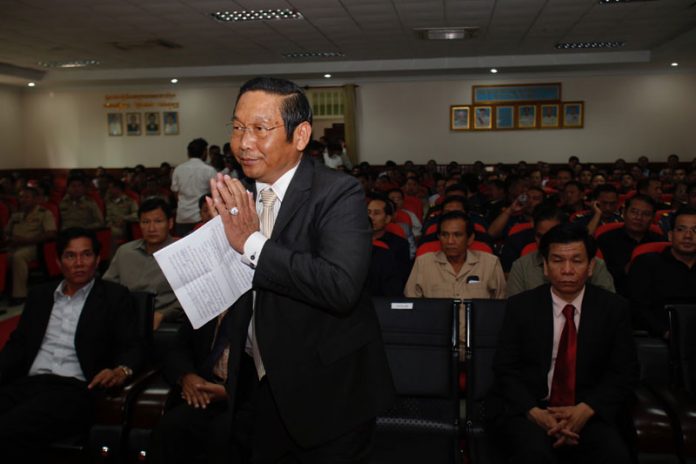 Investigations into the alleged corruption of ousted Phnom Penh Municipal Court director Ang Mealaktei have stalled, placing a spotlight on his relationship with Anti-Corruption Unit (ACU) chief Om Yentieng, who is leading the probe.

Mr. Mealaktei was removed from his position on February 17 just hours after Prime Minister Hun Sen suggested in a public speech that a multimillion dollar bribe may have convinced the court to release on bail a couple jailed in connection with a high-profile murder case.

After the Justice Ministry completed its investigation into Mr. Mealaktei on April 7, Mr. Yen­tieng spent two days questioning the former judge. A senior official inside the ACU, who asked to re­main anonymous for fear of retribution, described meetings be­tween the two as “friendly,” noting that the two had lunch together amid the questioning.

On April 13, Mr. Yentieng said he would resume questioning the former judge following the Khmer New Year in mid-April. On Thurs­day, however, Mr. Yen­tieng said it was unclear if Mr. Mealaktei would be summoned again.

“We are still having difficulty coming to a conclusion as we need more evidence,” Mr. Yen­tieng told reporters. “If we find [more evidence], we will continue questioning him.”

Mr. Mealaktei, who has been given a position in the Justice Ministry, remains a free man.

Government spokesman Phay Siphan said last month that the friendship between the anti-corruption czar and the fallen judge could complicate the investigation.

In the wake of Mr. Mealaktei’s removal, Mr. Siphan called the ousted judge “the devil” in a post to his personal Facebook page. He cited two high-profile cases the judge had overseen as containing irregularities: the brief jailing last year of Cam­bo­dian-American businessman Rich­er San, and the ongoing imprisonment of Gregg Fryett, a British businessman jailed in Banteay Meanchey prov­ince in 2013.

Mr. Mealaktei was director of the Banteay Meanchey Provincial Court until April 2014, when he was transferred to Phnom Penh.

In an interview last week, Thun Saray, the longtime president of rights group Adhoc, said the relationship between Mr. Mealaktei and Mr. Yentieng was fortified in 2011, when the ACU busted a police-run extortion ring in Banteay Meanchey.

“They know each other well …and their relationship became especially strong during the period of investigating the commissioner of Banteay Meanchey police,” Mr. Saray said.

That investigation by the ACU netted provincial police chief Hun Hean, his deputy Chheang Son, and By Nasy, chief of the provincial drug unit. It ultimately led to the ACU’s biggest arrest to date in Moek Dara, the former chief of the National Authority for Com­bating Drugs. All four were prosecuted by the Banteay Meanchey court un­der Mr. Mealaktei’s supervision.

The week after Mr. Mealaktei’s removal as Phnom Penh’s court director, the National Police said in a statement that an Audi SUV confiscated by the court from a drug dealer had been given to the judge’s son, a deputy police chief in Phnom Penh’s Prampi Makara district.

In 2012, Oung Oeun, then the governor of Banteay Meanchey, sent a letter to Prime Minister Hun Sen claiming that Mr. Mealaktei and other officials had colluded to il­legally confiscate hundreds of thousands of dollars worth of farm machinery from Mr. Fryett, the jailed Briton.

But despite the many allegations against him, the investigation into Mr. Mealaktei is unlikely to lead to corruption charges, according to the senior official at the ACU.

“My boss will make a report to Preah In [Mr. Hun Sen] saying that Mr. Mealaktei did nothing wrong in his job, and requesting an end to the case because he is his close friend,” he said.