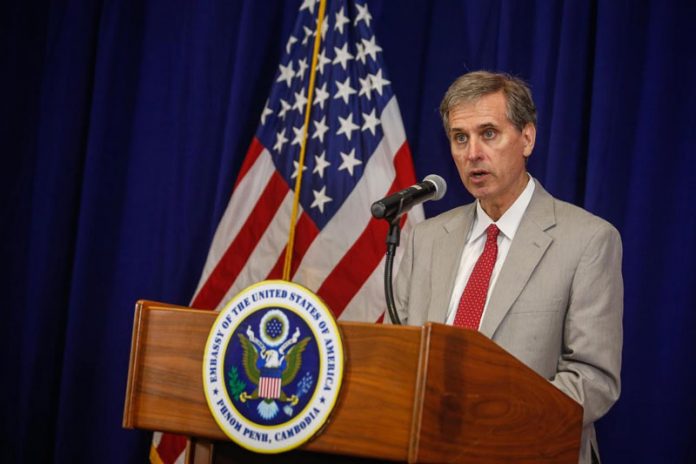 Phnom Penh and Washington dug in their heels Tuesday on either side of a controversial draft law that threatens to rein in Cambodia’s NGO sector and which a visiting U.S. envoy urged the government to reconsider.

After shelving the draft in 2012 amid intense criticism both at home and abroad, the government recently dusted it off and vowed to pass it imminently. At the inauguration of a new road in Kompong Speu province on Tuesday, Prime Minister Hun Sen said the government was pressing ahead with the draft in order to stave off the threat of terrorist dollars seeping into the country.

“The government,” he said, referring to his cabinet, “will approve this law soon and will send it to the National Assembly.”

Using a rustic metaphor, the prime minister said the law was not meant to make life harder for NGOs, but rather to make it better for all Cambodians.

“We don’t want to kill the chicken and take its eggs; we want to feed the chicken to make it fat to take the eggs and the meat,” he said. “Non-government organizations and associations, please don’t be worried about the law. It will protect you and support you and let you act freely.”

Reeling off a list of risks, however, Mr. Hun Sen warned vaguely of NGOs acting as micro-lenders, unlicensed banks and potential financial conduits for terrorist organizations.

“So if the next day there is a terrorist act by some organization, who is responsible?” he said.

The prime minister has claimed that the government already shut down one NGO on suspicion of funneling terrorist dollars into the country and had its eye on a few others, but has never provided any details.

According to the last version of the draft the government made public, in 2011, the law would require NGOs and associations to register with the government and file annual reports on their finances and activities. It lacks a clear list of reasons the government could use to deny registration, and would let the Foreign Affairs Ministry shut down foreign NGOs deemed to have jeopardized the “customs and traditions of the Cambodian national society.”

This vague language has critics worried that the government could use the law to silence groups that speak up about its many rights abuses, as they often do. They also want the government to release its current draft of the law and meet with NGOs about it before a vote.

In recent weeks, the government has publicly rebuked the U.N. for urging it to keep meeting with NGOs about the law and called U.S. Ambassador William Todd “insolent” for doing the same.

But at a press conference at the U.S. Embassy on Tuesday, the U.S. deputy assistant secretary of state for democracy and human rights, Scott Busby, backed up the ambassador.

Based on the 2011 version, Mr. Busby said, “I’m concerned that the law will impose restrictions or burdens on NGOs that will make it difficult or impossible to do their critical work.”

At a closed-door meeting earlier in the day with Foreign Affairs Minister Hor Namhong, he said, the minister assured him that the law was only meant to make it easier for the government and NGOs to cooperate.

“We support such cooperation,” Mr. Busby said. “But as I said to the minister, we do not believe that a new law is needed to accomplish that.”

“I urge it [the government] to reconsider whether an NGO [law] is needed at this time, as there are already Cambodian laws on counterterrorism and criminal activity, as well as a civil code, that address the concerns this proposed legislation is intended to address,” he said.

Mr. Busby also rejected the minister’s assertion that the ambassador’s remarks on the draft amounted to interfering in Cambodia’s internal affairs.

The envoy said he recently attended the U.N.’s universal periodic review of the U.S. and its human rights record, where other countries made nearly 350 comments on how his country could improve.

“So what we are doing here in Cambodia is offering our comments to the Cambodian government, just in the way that other governments have offered their recommendations to us,” he said.

In 2011, the U.S. warned that it might freeze the level of its aid to Cambodia if the government passed a version of the draft law being circulated at the time.

On Tuesday, Mr. Busby declined to comment on how the law’s passage would affect aid because the U.S. had yet to see the latest iteration.

The prime minister’s cabinet is expected to discuss the draft on Friday, clearing its way to the National Assembly, where his ruling CPP has the majority it needs to get it passed.