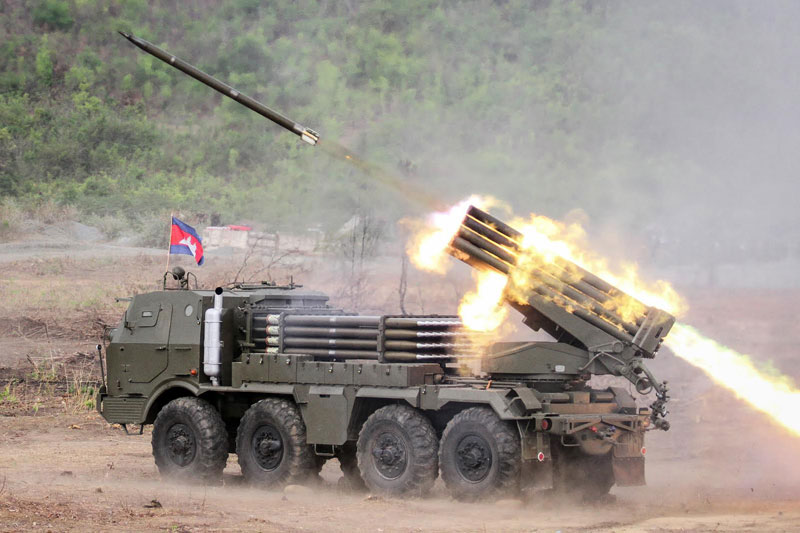 PM Threatens Use of Rockets in Areng Valley

The day after the government deported a foreign activist opposed to a proposed hydropower dam in Koh Kong province’s Areng Valley, Prime Minister Hun Sen on Tuesday invited activists in the valley to secede from Cambodia, but warned that rocket launchers could be deployed if they did.

Addressing an audience of government officials at a National Clean City Day event on Phnom Penh’s Koh Pich island, Mr. Hun Sen took aim at Spanish national Alex Gonzalez-Davidson—who was expelled from Cambodia on Monday night—and fellow activists who briefly blocked a government convoy on its way to the site of a proposed hydropower dam in the valley in September.

“It’s too extreme that [you] dared to arrest officials or experts who went to work over there,” the prime minister said.

“If you want to create a secession, please do it. [We will] use BM-21s because there are brand new [ones]. It is too bad, but I don’t want to accuse them like that,” Mr. Hun Sen said.

BM-21s are Russian-designed truck-mounted rocket launchers, which Cambodia counts among its military hardware.

Before launching into the diatribe, Mr. Hun Sen said he was growing bored with the frequent discussion about the future of the Areng Valley, and warned foreign citizens not to advise Cambodian people on the development of the country.

“I feel bored, too. The Khmer are also a knowledgeable people. [We] don’t need to always wait for foreigners’ preaching so that the Khmer know what to do,” he said.

The prime minister also took a step back from his earlier defense of the proposed hydropower project, which would flood a 9,500-hectare area that is home to some 30 globally threatened animal species and force more than 1,300 ethnic Chong people to abandon their ancestral land.

“Stop talking about Areng and let’s study clearly about it. And I have come up with an idea that no matter whether the study is clear or not, there will be no construction from now on until 2018,” Mr. Hun Sen said.

In a letter to opposition lawmaker Te Chanmony last month, Mr. Hun Sen downplays the impact the project would have on the minority families and touts its benefits, including tax revenue, job creation, eco-tourism potential and a reduction in greenhouse gas emissions when locals switch from burning charcoal to using hydropower.

Continuing his discussion of environmental matters Tuesday, Mr. Hun Sen recounted meeting with the European Union’s ambassador to Cambodia, Jean-Francois Cautain, at the prime minister’s home in 2014, where they discussed deforestation in Europe and Asia.

“When His Excellency met me for the first time, I said, ‘European people cut down forests a long time ago and then come to preach others,’” Mr. Hun Sen said. “Cambodia doesn’t do what Europe did by cutting all the forests.”

Contacted by telephone, In Kongcheth, coordinator for rights group Licadho in Koh Kong, disputed the prime minister’s version of the roadblock set up by Mr. Gonzalez-Davidson and his NGO Mother Nature in September.

“His actions were not too extreme because the local villagers in the communities protected the Areng by taking part with Mr. Alex,” he said. “The officials didn’t give any notice before they went there.”

Mr. Kongcheth said the activists and communities in the valley had neither plans nor means to create a breakaway region but were always ready to defend the area.

“They told me that they will fight to the death if the company enters to construct the dam there,” he said.

Contacted Tuesday, Mr. Gonzalez-Davidson, who lived in Cambodia for 12 years, confirmed in an email that he had arrived safely in Madrid on a flight paid for by Cambodian authorities.

Asked about his plans for the immediate future, he wrote: “Work will continue, even stronger than before, as Mother Nature’s reputation has received such a massive publicity push (courtesy of Hun Sen) that we are now in many ways unstoppable.”

“As for my next move, I am not yet sure to be honest. I am still shocked that I have suffered the tremendous injustice of being exiled out of my own country for fighting for the protection of its natural resources, but then I look at what other Cambodians (Chea Vichea, Chhut Vutthy, etc) have had to endure in their [pursuit] of justice and can only but be embarrassed of them and have no choice but to go forward.”