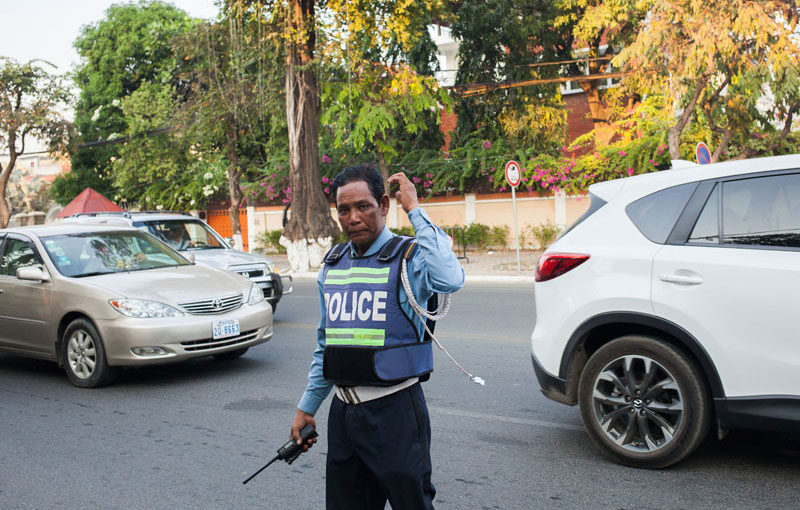 Prime Minister Hun Sen hit back at critics of the new traffic law on Tuesday, singling out his own sister for what he said were unnecessarily negative Facebook posts.

On January 1, Cambodia rolled out a long-anticipated replacement of the Land Traffic Law, which raises fines for scofflaws, limits the number of riders per motorbike and requires passengers to wear helmets.

Addressing grumbling on social media about the new provisions, Mr. Hun Sen on Tuesday asked citizens to be patient.

“Of course, I know there are a number of people who are unhappy with the implementation of the new traffic law, but please, our citizens, give time for the Royal Government to implement it,” he said during a speech at the inauguration ceremony for a new overpass in Phnom Penh.

Among the detractors, he noted, was his younger sister Hun Sinath, who posted a lengthy note to Facebook on Sunday arguing that authorities should be targeting those who double-park on city streets rather than “fining poor people.” She also criticized the requirement that drivers carry original copies of their driver’s licenses, registration cards and vehicle inspection papers, saying they might be lost or stolen.

“I am criticizing straight to my sister—she should not have written such a thing,” Mr. Hun Sen said of the post, which was widely reported on by local media outlets.

“I sent back a message to my younger sister to understand the issue. Although there are some problems [with the law], life is more important,” he said.

Mr. Hun Sen said meetings would be held to address specific issues that had arisen since the advent of the law, such as questions posted to his Facebook page by Buddhist monks wondering whether they, too, had to wear helmets.

However, while specific issues are hammered out, he stressed, “the implementation will continue to be strictly enforced.”

“Everybody needs to have a driver’s license if they drive because they cannot borrow it from others,” he said, adding that more than 2 million drivers remained unlicensed nationwide.

Mr. Hun Sen also announced that he had granted an exemption to more than 400 owners of right-hand-drive trucks, who have been protesting efforts to enforce a decades-old prohibition against the vehicles.

He said those who already own the vehicles would simply be made to pay the requisite import tax, but not forced to convert their cars to a left-hand-drive configuration, adding that imports of additional vehicles would be banned—despite such a ban having been in place since the early 1990s.

The truck owners, who have been aggressively protesting for months, on Tuesday said they welcomed the prime minister’s remarks.

“I really appreciate the premier’s comments about our trucks because we don’t want to change our truck’s drive to left-hand-drive,” said 32-year-old Huor Sok Lim, adding that he was preparing documents to pay more than $4,000 in back taxes on his truck.