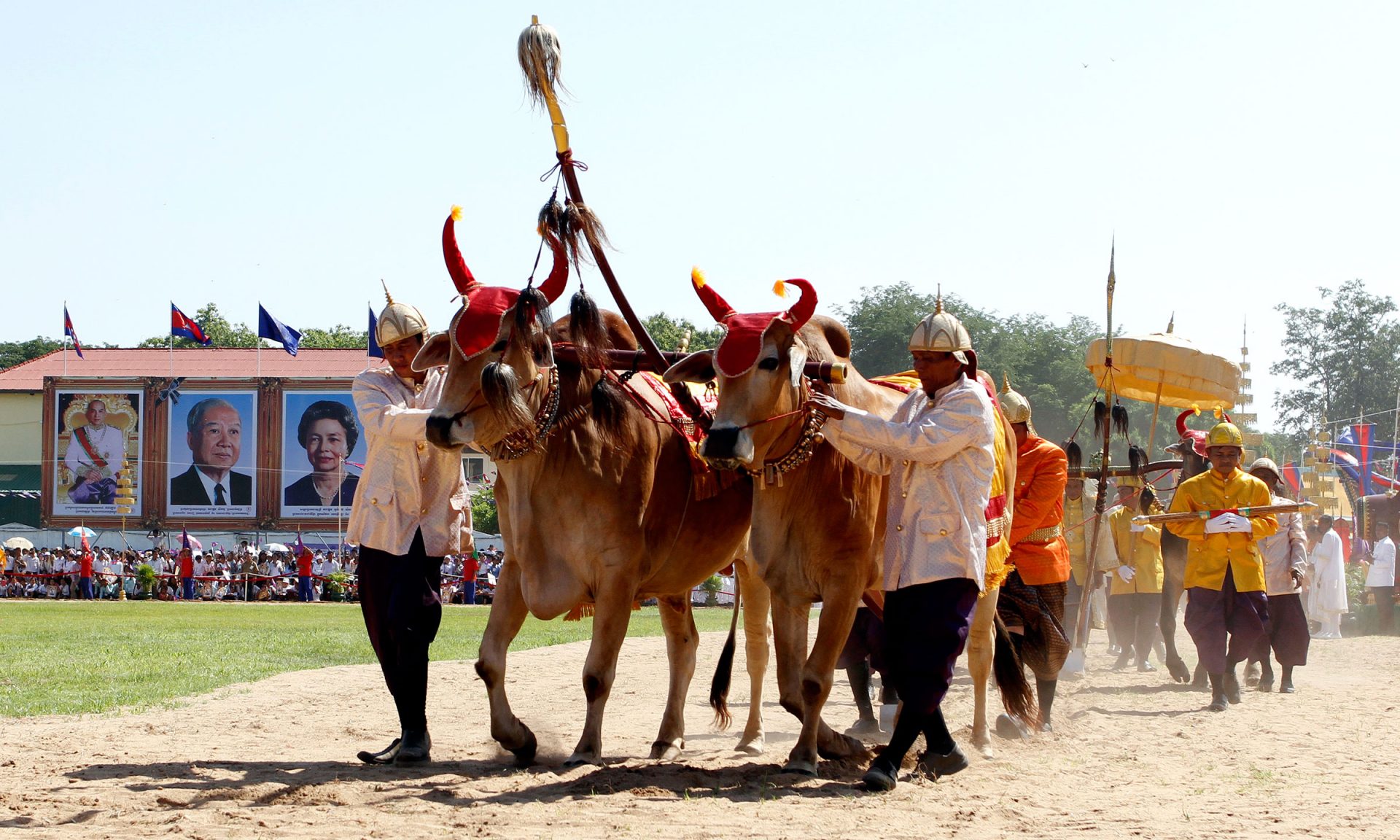 KOMPONG CHAM CITY – The fawn-colored ox briefly perused the seven royal platters placed in front of him then greedily stuck his silky muzzle into the one containing corn.

His partner, less interested in what the silver bowls contained, contented himself with munching on a tuft of grass that sprouted from the ground in the football stadium.

But the lone ox’s choice of corn was imbued with great meaning at Tuesday’s annual Royal plowing ceremony, as his dietary predilection was hailed by the Royal Palace’s astrologer and Brahmin priest, Kong Keng, as a foretelling of this year’s agricultural harvest and the general wellbeing of the kingdom.

“We have predicted that this year we will get a high corn yield as the ox ate corn,” Mr. Keng announced to hundreds of unsurprised farmers gathered at the stadium in Kompong Cham City on Tuesday.

Despite the presence of King Norodom Sihamoni, senior government officials and the expectant farmers, it really wasn’t much of a prediction for a ceremony that once held great symbolic significance.

Should the bovines choose to drink some water, the prediction is that Cambodia could see floods, and sampling the rice wine means anarchy could erupt in the streets.

But it seems that the royal oxen may simply have a taste for corn. They chose corn, and beans, at last year’s plowing festival. Corn and beans, with some cut grass, was also on their menu in 2011, while in 2010, it was only corn and beans.

Though the oxen failed to choose rice last year, 2012 saw record rice yields. Similarly, in 2011 the oxen did not partake of the flood-warning drinking water, yet the country saw some of the worst flooding in decades, completely wiping out the crops of many farmers. Asked whether the oxen are consistently getting it wrong because of their apparent taste for corn, royal astrologer Mr. Keng demurred Tuesday.

“The predictions are not 100 percent accurate—it can sometimes be a little bit different,” he said, adding that predictions were only based on what the beasts had eaten, not what they had neglected to eat.

Asked if the oxen had ever drunk the alcohol, which heralds turmoil and chaos, Mr. Keng said they had done so during the Sangkum Reastr Niyum period before the Khmer Rouge took power in 1975.

So the cows did get something right.

Ang Chou­lean, professor of an­thro­pology at the Royal University of Fine Arts, said it was unclear when the ancient rite of the plowing ceremony began, but it was many centuries ago, and Thailand has much the same tradition.

“As the King is the master of the land…it is his duty to plow the field so that everyone can plow after him,” Mr. Choulean said. “It is symbolic: This is sexual intercourse between the King and the earth—which is female—to produce crops.”

While in centuries past the King himself drove the plow, that tradition has now faded. And more often than not, a representative of the King is appointed. In Tuesday’s case it was the Kompong Cham provincial governor who acted his role.

“Only once or twice did [late King Father Norodom] Sihanouk plow the land, said Mr. Choulean, adding that he be­lieved that in the 1960s, King Sihanouk or one of the royal family members held the ceremony in front of Angkor Thom temple in Siem Reap. In 1970, Cam­bodia stopped celebrating the plowing festival altogether as it became a republic under Lon Nol. The festival was reintroduced in the early 1990s after King Sihanouk re­turned to the country from exile and the monarchy was reinstated.

While the ceremony is traditionally held at Veal Mean—the gardens in front of the National Mu­seum—the Council of Ministers decided this year to rotate the ceremony throughout the country. Veal Mean is now overgrown and neglected after being used as the cremation site of King Sihanouk. Empty guest pavilions remain in situ for no apparent reason at Veal Mean, making holding the ceremony there impossible.

On Tuesday, prior to choosing from the silver platters, three pairs of royal oxen, plumper and shinier than their rural village compatriots, completed three rounds of the field harnessed to plows. The first pair was led by recently-appointed Kompong Cham provincial governor Lun Limthai, who was dressed in gold pantaloons and pointed gold slippers. Mr. Limthai was followed by his wife, who was draped in purples and gold and shaded from the sweltering sun by a gold parasol, as she sprinkled seeds into the newly furrowed earth.

Mr. Limthai said Tuesday he was glad his province had the chance to host the ceremony, adding that about 85 percent of the province’s population worked in agriculture. One of those farmers, Hun Sophat, 50, from Tbong Khmum district, said while he usually farmed rice, this year he would plant some corn too after hearing the astrologer’s prediction.

“I really believe the prediction, so I’ll start growing corn and hope I get a good crop,” he said, adding that the fact the oxen had neglected to drink water was a good sign, as it meant there would be no floods. In 2011, Mr. Sophat said, he lost 70 percent of his crops to floods.

Yang Saing Koma, director of the Center for Study and Development in Agriculture, said that corn probably wasn’t a good crop to plant.

“It’s not very difficult to grow… [but] it’s not really a very sustainable business for a small farmer,” Mr. Saing Koma said, explaining that the corn market is controlled by companies that produce animal feed, so the market depends heavily on the prices those firms are willing to pay.

Asked whether last year’s prediction for corn had come to pass, Mr. Saing Koma said while he did not have comparative figures on hand, “corn grew less” than rice.