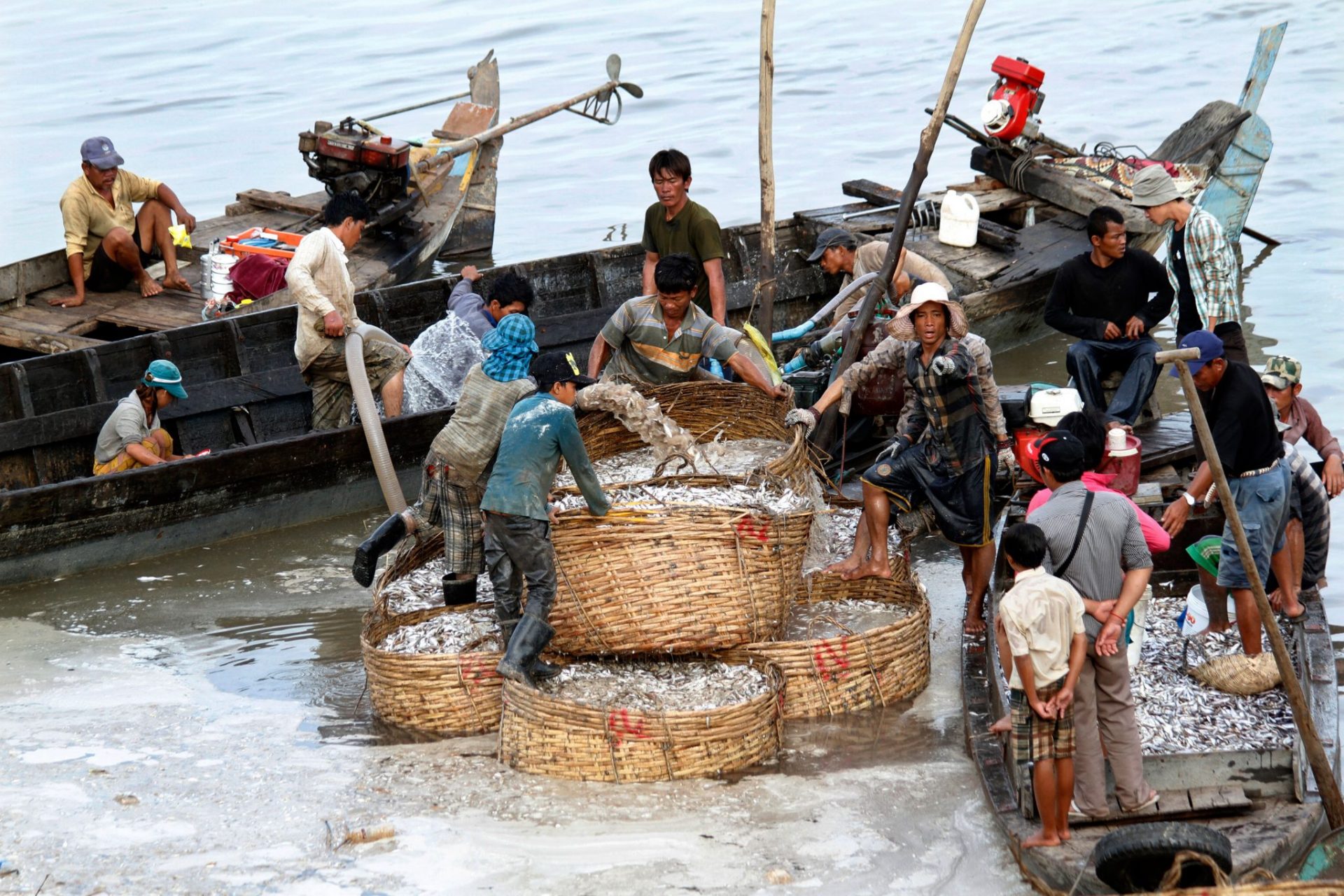 There was something in the air last week along National Road 5 in Phnom Penh’s Sen Sok district, and it smelled like fermented fish.

But due to low water levels during this year’s five-day migration season, fishermen and buyers were predicting a poor catch, both in the size and quality of fish being pulled out of the river.

“There are a lot of small fish this year and I’ll be losing money because the fish harvest is going to be poor,” said Nop Chanthol, 44, the owner of dai 10C in Sen Sok’s Samraong commune, one of 64 dais—or large fishing docks anchored in the middle of the river—situated along the Tonle Sap.

Of particular concern is the low number of Siamese mud carp, or trey riel, which are used to make the pungent fish paste known as prahok. At this time of year, great numbers of trey riel make the annual migration from their breeding grounds in the flooded forests and marshes around the Tonle Sap lake to the Tonle Sap River’s convergence with the larger Mekong River.

Last year’s catch was one of the largest in years, due in part to flooding around the Tonle Sap lake, with more than 30,000 tons of trey riel reportedly caught in the Tonle Sap River, up from just 7,000 tons the year before.

Sam Nov, deputy director of the Fisheries Administration, would not venture to guess at what the total catch might be this year, though he said it would be significantly less than last year.

Mr. Chanthol said that about 70 percent of his catch last year was composed of trey riel, which are fattier and sell at a much higher price than the smaller trey sloek russey, which can only be used in animal food and fish sauce.

This year, only 30 percent of his catch is made up of trey riel fish, he said, and only a fraction of them are big enough to sell for prahok production.

Vong Kimheak, who runs a weigh station on the banks of the Tonle Sap in Sen Sok’s Prek Phnov commune, said that she was selling about 60 tons of fish per day, but that none of them were big enough to end up being used in prahok.

Minh Bunly, the coordinator of the fisheries NGO Fisheries Action Coalition Team, said that the reason for the poor catches down river is that low water levels this year had prevented many fish from spawning in the forests and marshes around the Tonle Sap lake that normally become flooded during the rainy season.

Mr. Bunly also said that the haul of legitimate fishermen, such as Mr. Chanthol, who pays about $23,000 in tax to provincial officials for his spot on the river, is being undermined by illegal fishing upriver.

“Another reason the fish yield has decreased this year is because, compared to previous years, fisheries authorities have not been able to properly prevent illegal fishing,” he said.

Nonetheless, Mr. Chanthol’s operation on the Tonle Sap River, along with those of five other dai owners lined up alongside him, were going full steam.

Upriver from his dock, tiny fish swam into the opening of a giant net—about 20 meters wide, 16 meters deep and 100 meters long. Every 20 minutes or so, a motorized pulley took in the net and workers dumped the haul of trapped fish on board the dock. Workers then scooped up the fish with netted shovels and dropped them into blue buckets that were then put onto slender wooden motorboats waiting nearby. The boat drivers took their load to a weigh station along the riverbank, where fish were being bought for 500 riel per kg and sold to buyers for 600 riel per kg.

Mr. Nov of the Fisheries Administration, remained hopeful that the size and quality of this year’s catch would improve in the coming days, despite the low water levels.

“The fish season just started on Wednesday and the small fish are coming first,” he said. “We realize that the fish yield has declined this year because the water is low, but maybe we will see it change tomorrow.”

Previous article
Amid a Culture of Hit-and-Runs, a Call for Enforcement of the Law
Next article
Heroin Disguised as Health Tonic Intercepted at Post Office