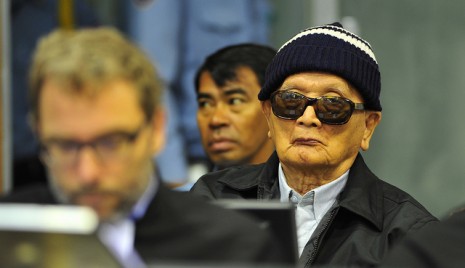 Political Will Lacking as Much as KRT Funding

The government on Monday defended its position not to fulfill financial obligations to the Khmer Rouge war crimes tribunal, where about 200 local staff are striking over months of unpaid wages, and denied it has broken any agreement with the U.N.

Legal experts, however, said that by shirking its responsibilities to the war crimes court, the government was in breach of previous U.N. agreements and at risk of reinforcing the perception that it does not support the beleaguered court’s mandate to prosecute former officials of the Pol Pot regime.

“The government has no more budget available for the national side of the ECCC [Extraordinary Chambers in the Courts of Cambodia],” said Ek Tha, a government spokesman with the Council of Ministers’ Press and Quick Reaction Unit.

“We haven’t broken any agree­ment with the U.N. in the sense that we had contributed in the past to the national side of the court, and we have the right to seek support from donors outside of Cambodia,” he continued, adding that the government has already contributed about $16.9 million, in-kind and cash, toward the court and simply cannot afford to contribute more. According to the ECCC’s website, the government’s cash contribution has amounted to some $4.8 million.

Though the government has, since the war crimes court began operating seven years ago, relied largely on foreign donor funding to cover its financial responsibility to the national side of the court, the tribunal has struggled this year to secure enough donor money to pay the salaries of its Cam­bodian staff. The situation came to a head on Sunday, when about 200 of the 250 national staff at the court began an indefinite strike over three months of un­paid wages—the second time this year such action had been taken.

“Cambodia is a poor country. We have a lot of things to focus on. We also have to focus on re­building our country, from education to health care to rural devel­op­ment and agriculture. I am quite positive that donors and friends of the ECCC will not let the court down,” Mr. Tha continued.

Mr. Tha said that Deputy Prime Minister Sok An will meet with the Japanese and Australian ambassadors to Cambodia in separate meetings tomorrow in an effort to solicit donations to the national side of the court, part of a wider fundraising appeal in which the representatives of the government and U.N. toured five Asean countries last month seeking donations.

The Khmer Rouge tribunal has so far delivered just one verdict—a life sentence for former S-21 prison chief Duch in Case 001. Currently, due to the drawn-out legal process and the old age of the defendants, just two of four senior regime leaders originally indicted remain on trial in Case 002—with a verdict expected next year.

With this case coming to an end, the government’s refusal to provide the necessary funds to keep the court afloat may also be a reflection of its unwavering position that the court not investigate Cases 003 and 004, said Long Panhavuth, a program officer with court-monitoring group the Cambodian Justice Initiative.

“The Cambodian government is nervous about supporting or funding the national side as they don’t want to see the KRT go after Cases 003 and 004” which deal with lower ranking members of the Khmer Rouge—the regime in which several current government officials first cut their political teeth—Mr. Panhavuth said.

Prime Minister Hun Sen has been accused by ECCC defense lawyers and legal observers of interfering with the court through public statements in which he has presumed the guilt of defendants and insisted that the court’s mandate ends after the conclusion of Case 002.

Mr. Panhavuth added that the U.N.’s public calls for the Cambodian government to perform a funding role that it has never previously been expected to fill could also be an attempt to pin the blame on the government before the court falls apart entirely.

“The U.N. may believe that there is no way that the Cam­bodian government will get the funding. But this way, if the court collapses, the U.N. will not be blamed because the Cambodian government didn’t put more money in,” he said.

While the U.N. will continue to seek funding to fill in a $2.9 million gap in the national side of the budget this year, David Scheffer, the U.N.’s special expert to the tribunal, called on the government Monday to fulfill its obligation to the cash-strapped court.

“We are working hard with the Royal Government of Cambodia, which has the legal obligation to cover national salaries, and with foreign donors to resolve this problem,” he said via email.

Mr. Scheffer added that suggestions that donors were reticent to give to the national side of the court due to previous allegations of government interference and court corruption were “stale.”

“Old allegations of political interference and corruption have nothing discernible to do with the current financial difficulties. Donor fatigue has set in with respect to covering the Cambodian legal obligation and is far more related to post-recession belt-tightening by foreign donors than to the stale allegations,” he said.

The Cambodian government must ensure that the national side continues to function if it hopes to maintain credibility internationally, said Lao Mong Hay, a law professor and independent political analyst.

“It is not a question of political will. The government has certain duties according to law and under agreements with U.N., and we have to honor our obligations,” he said.

“[Government leaders] have been dragging their feet all along. First trying not to create the tribunal, then, after the creation, our prime minister hasn’t been keen to see through the whole process,” he added.

Youk Chhang, director of the Documentation Center of Cam­bodia, said that without the support and confidence of the Cambodian public, the court could not expect to receive continued international sympathy.

“The expectation of the ECCC, even though it was high, has been damaged,” he said, citing the death of former Khmer Rouge Foreign Minister Ieng Sary earlier this year and the decision in 2012 that his wife, the regime’s former Social Affairs Minister Ieng Thirith, was unfit to stand trial, as events that have “driven people away” from the tribunal.

“When you can bring back support from people, it will bring confidence to international community to look into this. We are here for the public, here for justice, not here for the project of the ECCC,” he said.

Helen Jarvis, a long-time adviser to Mr. An who previously advised the government during the creation of the ECCC, said that both the U.N. and the government have always relied on donor funding to keep their side of the court operating, and that fatigue has set in due to the prolonged legal proceedings.

“I think everybody is concerned that the process is taking much longer than ever anticipated. This is the biggest problem. We are now seven years into the process, which was originally projected for three years. This is a huge problem, both financially and because of the age of accused and the victims,” she said.