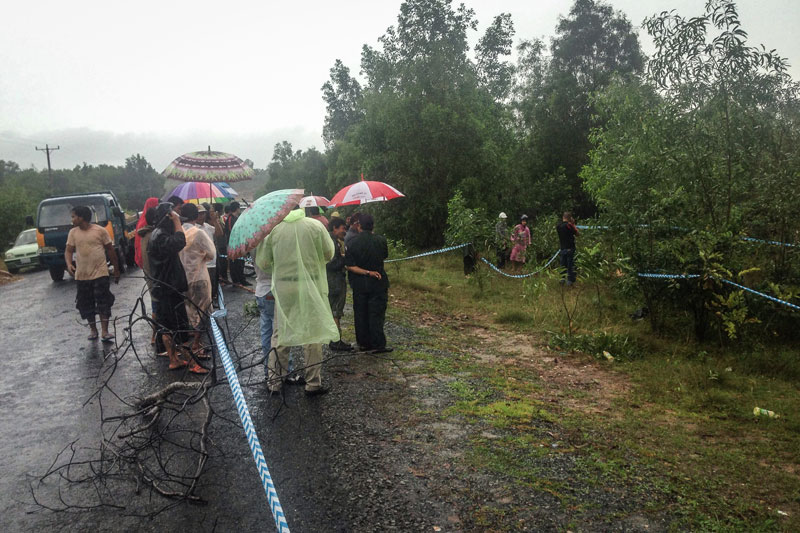 Police in Sihanoukville are searching for a Russian man suspected of murdering another Russian on Saturday night by stabbing him 30 times in the back before slitting his throat, police said Monday.

Mr. Phoan, who is leading the investigation, said that when police recovered the body, they found his apartment key and a small quantity of cash in his pocket, and a silver necklace around his neck.

“We concluded that this case was not robbery, because some of the victim’s property was not missing,” he said, adding that according to Denis Goncharov’s Chinese wife, his smartphone was missing.

The victim’s wife, Yuan Cuixiang, 26, also told police that a Russian man on a motorbike picked up her husband at their apartment on Saturday night and that the two left to go drinking, Mr. Phoan said.

The bureau chief said that the man—whom he refused to identify on the grounds that it could hurt police efforts to locate him—was the primary suspect in the murder.

“They were on one motorbike, going drinking together, and then he killed him along the way,” he said. “We suspect that the murder was an act of revenge.”

Mr. Phoan said police suspected Denis Goncharov had been driving the other man’s motorbike when the attack began, and that it appeared he had attempted to flee, as his body was found near pieces of a broken mirror, likely from the motorbike.

“The victim tried to run away and the suspect continued stabbing him,” he said. “We can say this because the victim’s body was found about 10 meters from pieces of the mirror.”

The police chief said Ms. Yuan told investigators that she last spoke to her husband on the phone at about 12:40 a.m. on Sunday.

“His wife called him and he just responded with the word ‘baby’ and then silence,” he said. “No one could contact him afterward.”

Mr. Phoan said the couple arrived in Sihanoukville from Bangkok in April, but that he did not know what they had been doing in Cambodia.

Sarath Vichea, chief of the provincial police’s technical and scientific bureau, who examined Denis Goncharov’s body with doctors at the provincial referral hospital, said they concluded that he had been stabbed 30 times before his throat was cut.

“The victim was attacked between 11 p.m. and 12 a.m. on Saturday night, and not far from the place where we found his body,” he said. “But it was difficult to find more evidence because of heavy rain.”

Mr. Vichea said police were continuing to search the canal and surrounding area for more clues.

Deputy provincial police chief Kol Phally said Denis Goncharov was an IT engineer visiting Cambodia as a tourist, and also refused to identify the Russian suspect.

“I can confirm that it involved a personal dispute and that the suspect is a foreigner, not Khmer,” he said.