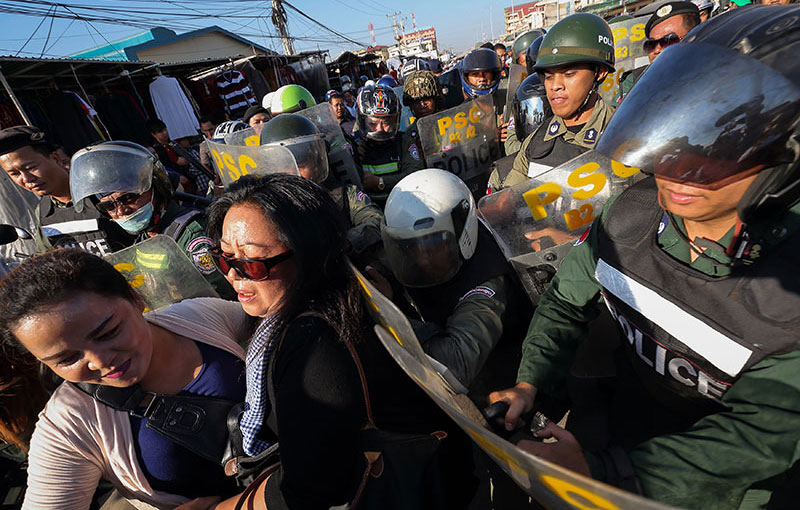 Two years after at least five young men were killed by state forces, ending a two-day riot, a few dozen monks, rights defenders and family and friends of the victims turned out to light incense and pray for their souls. However—warned by City Hall a day earlier that congregations on Veng Sreng would not be tolerated—they were met with heavy-handed tactics that have become a trademark of Prime Minister Hun Sen’s government.

As groups gathered peacefully at two separate locations along the industrial thoroughfare, police and security guards stood by. At 8 a.m., the state forces pulled on their helmets, picked up their riot shields and began banging them with truncheons as they marched toward the mourners.

In front of the Canadia Industrial Park—the epicenter of the 2014 strikes, elements of which started violent riots, complete with barricaded roads, burning tires and Molotov cocktails—a group that included union leader Vorn Pao heeded the warnings and moved away as police moved in.

But about 500 meters down the road, in front of the Vattanac Industrial Park, a crowd led by Naly Pilorge, head of rights group Licadho, and Ou Tepphallin, deputy president of the Cambodian Food and Service Workers Federation, refused to follow orders to leave.

One guard yanked Ms. Tepphalin up from a seated position and launched her toward the road, where she was caught by Ms. Pilorge. A line of riot shields came crashing into the backs of the two women, driving them east along Veng Sreng.

“We never intended for this to be a march,” Ms. Pilorge said later. “We just wanted to pray for the spirits, chant and then leave. They would have been better off just letting us do that.”

Riot police, some of them smiling and laughing, took turns launching into the backs of the two women. A few hundred meters on, police and guards formed a line across the road, channeling the procession into a side street.

A group of men unfurled a banner bearing images of some of the victims of the 2014 repression, but a few enthusiastic guards moved in and snatched the banner and then attempted, unsuccessfully, to tear it into pieces.

By this point, hundreds of security personnel had corralled three separate groups—including serial protesters from the Boeung Kak lake community and a group of monks led by “multimedia monk” Luon Sovath—into the same side street.

With the tension building, about a dozen tuk-tuks arrived and formed a guard around Mr. Pao—who was savagely beaten, arrested and imprisoned for his role in the 2014 protests—ostensibly ensuring his safe passage as he marched on chanting “we will not forget January 3.”

Almost 3 km from where the memorial was supposed to be held, police took shade under trees as the mourners retired to a cafe for lunch.

“I came here today to bless the soul of my disappeared son,” Khem Soeun said inside the restaurant. “But the authorities, they don’t want this event to be remembered. I think they don’t allow people to pray for the dead because they want to silence the issue. They want people to forget.”

Mr. Soeun’s 16-year-old son, Khem Sophat, vanished on January 3, 2014. He was last seen lying on Veng Sreng Boulevard in a pool of his own blood after military police sprayed their assault rifles into crowds of workers.

“We are suffering. We need our son’s body to be blessed by monks so his spirit can be reborn,” Mr. Soeun said, his wife crying as reporters and photographers circled them. “But we have no answers.”

A committee was set up following the killings to establish the “cause” of the events of that day, though authorities have not been forthcoming with details.

National Military Police spokesman Eng Hy on Sunday referred all questions regarding the investigation to the Interior Ministry, whose spokesman could not be reached.

As the tension died down over lunch, the mourners—now in full activist mode—began hatching a plan to split into groups, move out of the sight of police and then reconvene at the intended memorial site.

Eventually, small groups made their way back to the front of the Vattanac compound but the area was crawling with police and guards, and most of the mourners called it a day.

The Boeung Kak protesters, however, had not had their fill, and insisted on doing laps of Veng Sreng in three tuk-tuks, slowing down next to groups of police and guards to shower them in vitriol, after having goaded them, often exchanging cheeky smiles, all morning long.

“[The Boeung Kak activists] were just trying to reason with policemen,” Ms. Pilorge said. “Trying to humanize them, because they are people, too. They bring a little bit of humor to a difficult situation.”

Classifying the memorial gathering as a religious event, none of the organizers asked the municipal government for permission in advance of Sunday’s ceremony. However, City Hall issued a statement on Saturday warning that anyone who gathered “illegally” on Veng Sreng would face “strong action.”

Contacted by telephone on Sunday evening, City Hall spokesman Long Dimanche claimed that mourners were disingenuously using the term “religious event” as cover for a protest. He said that the memorial should not have been held where the workers were slain.

“If those people really have the intention to have a religious ceremony for the dead people,” he said, “they can directly contact the victim’s families and hold the ceremony at their homes or in pagodas.”