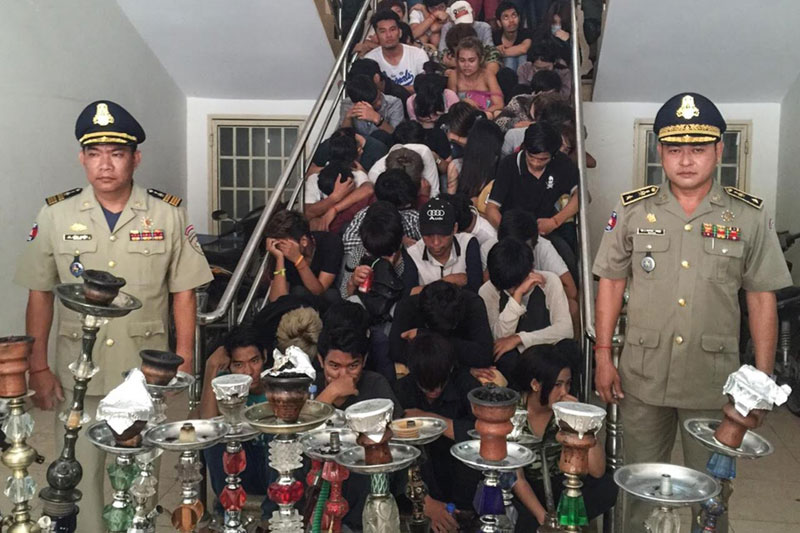 In their latest crackdown on shisha, Phnom Penh police detained, “educated” and informed the parents of 80 people found smoking the flavored tobacco out of water pipes at two separate establishments over the weekend, officials said Sunday.

Most of those arrested were students between the ages of 18 and 24, he added.

Brig. Gen. Sothy said they were detained at National Police headquarters for 24 hours while officers informed them of the dangers of smoking tobacco, releasing them only after their parents arrived.

“We educated them and made an agreement with their parents to guarantee they would not use shisha again,” he said. “The majority of the parents did not know that their children used shisha.”

Brig. Gen. Sothy said the nightclub, which had been operating for about three months, was shut down, and that police were searching for its owner, whom he called “the mastermind.”

“We are still looking for the mastermind…to bring him to face justice,” he said.

“We detained them for 24 hours, educated them and made them agree with us and their parents that if we arrested them again in another place, we will fine or punish them,” he said, adding that all of the offenders were above the age of 18.

He said the cafe, which had only been open for a few days, was shut down, also referring to its owner—who remains at large—as “the mastermind.”

“The Cambodian government gave the order to suppress the import and export of shisha because shisha has a high concentration of nicotine and it can also seriously affect people’s health,” he said, adding that the weekend’s raids were the first of the year.

In February last year, Prime Minister Hun Sen, a long-time cigarette smoker, told business owners they would have to stop selling shisha because young Cambodians were skipping school to smoke it, and because the tobacco could be laced with other drugs such as opium.

“Parents are concerned by this,” the prime minister said.