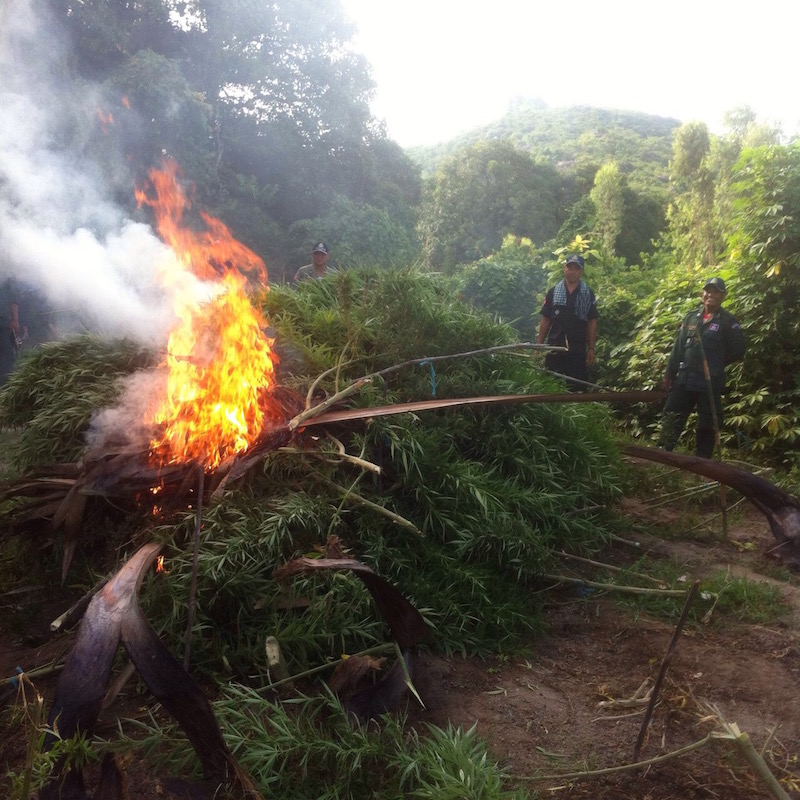 Police destroyed more than 60,000 marijuana plants spread across 3 hectares of land in a well-known Takeo province hotspot for growing the illegal crop, officials said on Tuesday.

About 20 police officers burnt down the plants on a hill in Kiri Vong district on Monday, the fourth time in the past two years authorities had destroyed plants there, said Chhun Sareth, deputy provincial police chief.

“It’s owned by many people,” he said. “When we went down there, there wasn’t anyone at the farm.”

He said he could not estimate the value of the plants, which were being watered by 50 water tanks.

Sao Chanthoeun, deputy district police chief, said tracking down the farmers was difficult in the rural area, which is renowned for marijuana cultivation, and that no arrests had yet been made.

“They always farm in different places and locations on the mountain, so it’s hard to get information to crack down or arrest the owners of the farms,” he said. “We have cracked down so many times, but we never arrest anyone because they are not living up there.”

Mr. Chanthoeun said that “hundreds of thousands” of marijuana plants had been destroyed in Kiri Vong in recent years. In February, police cut down more than 40,000 marijuana plants in a nearby commune, Preah Bat Chonchum, claiming that about 70 percent of locals were involved in growing cannabis in the village where the plants were found.