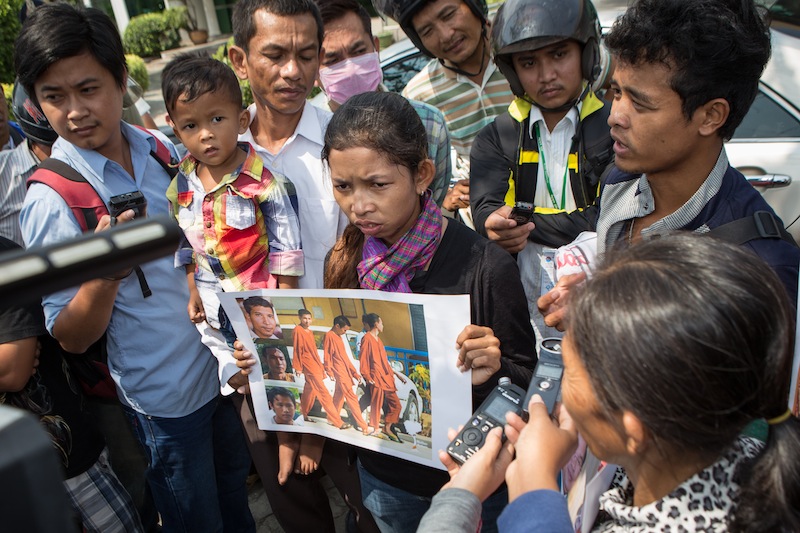 Security forces on Thursday blocked two mothers and a wife of jailed activists from the environmental group Mother Nature from walking to Prime Minister Hun Sen’s house to protest their family members’ imprisonment, before a representative of the premier’s cabinet chastised them for using the term “nature” frivolously.

In August, the three activists—Sim Samnang, 29; Tri Sovichea, 26; and Sun Mala, 24—were arrested and charged with threatening to cause damage, accusations that stemmed from their protests against sand dredging in a Koh Kong province estuary.

Just after 10 a.m. on Thursday, Sok Samnang and Bou Seng Im, mothers of two of the activists, along with Tha Sophea, Mr. Samnang’s wife, and Mother Nature activist Sorn Chandaram, set out from Wat Phnom and walked down Norodom Boulevard holding placards with photographs of the jailed activists, Mr. Hun Sen, his wife Bun Rany and King Norodom Sihamoni.

The activists were blocked at the intersection of Street 184 by four police officers and 10 Daun Penh district security guards, then escorted on foot to Wat Botum park, where they were met by Kong Chamroeun, a representative of the prime minister’s cabinet, who began to criticize the group’s behavior.

“There are just two or three people but you have caused many people to be bothered by you,” Mr. Chamroeun said. “Did you obstruct a public road because you want [the public] to pity you?”

The official then claimed the activists had been jailed due to being “stubborn” and even critiqued the name of their organization.

“Nature creates humans, humans do not create nature. Please consider the name you have given. The foreigner has translated wrong for you,” he said, referring to Mother Nature’s co-founder, Spanish national Alex Gonzalez-Davidson.

As Mr. Chamroeun continued to speak, Sok Samnang, 54, the mother of Tri Sovichea, interrupted him, claiming that they were simply following Mr. Hun Sen’s call for Cambodians to “protect natural resources.”

“No, if you had followed Samdech [Hun Sen], they would not be in jail now,” the official shot back.

A brief altercation then broke out between the four protesters and security guards, as the guards attempted to usher them into a vehicle. The protesters eventually agreed to leave the area on their own.

On Tuesday, a court official announced that conspiracy charges against two monks who co-founded Mother Nature had been dropped, while charges against Mr. Gonzalez-Davidson still stood.

Mr. Gonzalez-Davidson on Thursday said he had been summoned to the Court of Appeal on April 5 in relation to a motion his lawyer filed over the charges.

“I have instructed my lawyer to ask for the hearing on the 5th of April to be delayed as I am not allowed to return,” he said in an email.

“If the appeals [court] dismisses my request for delaying the hearing, I have instructed [my lawyer] not to represent me as that might play into the hands of those who keep pretending/lying that the procedures are being respected.”

Koh Kong Provincial Court officials could not be reached.