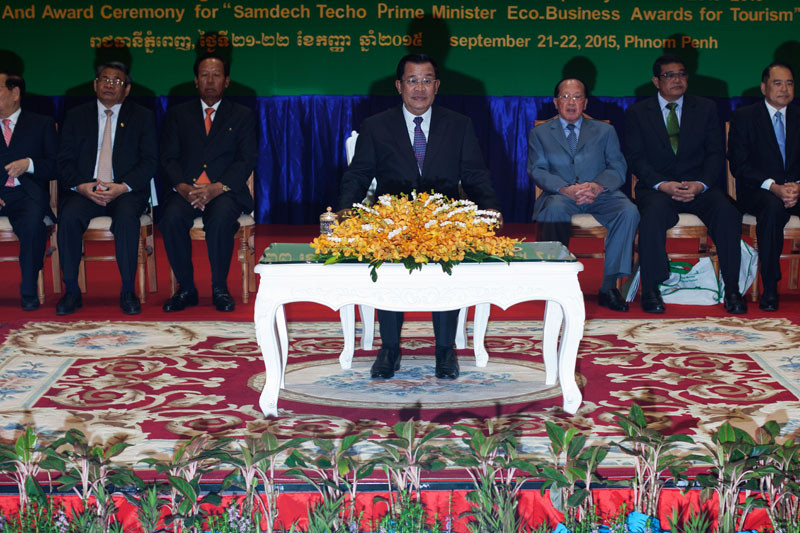 Prime Minister Hun Sen on Tuesday warned that a CNRP victory in the 2018 national election would inevitably lead to war when the opposition party starts redistributing land from the rich to the poor, something that opposition leader Sam Rainsy said would only be done by an independent tribunal.

Speaking at the Sokha Hotel in Phnom Penh at a conference on the future of tourism in the city, Mr. Hun Sen said that even if the CNRP were to win the election, it would struggle against entrenched pockets of power in the country.

“If voted in, [the CNRP says] it will solve this and that, but I dare say that the men here are its enemies,” Mr. Hun Sen suggested, referring to the many well-connected businessmen attending the event. “So would there be peace?”

“All tycoons are its class enemies, and they would seize their hotels and give them to the poor,” he said. “Would it be peaceful?”

According to a May code of conduct for his new “culture of dialogue” with Mr. Rainsy, the prime minister and his CPP colleagues are not allowed to threaten the outbreak of civil war if the CNRP forms the government in 2018.

Yet Mr. Hun Sen defended raising the prospect of civil war, saying it was a real possibility because the CNRP has both policies that could disadvantage the rich and an apparent hostility toward Vietnam.

“So, of course, war will happen,” the prime minister added. “This point is a point that must be considered.”

“Today is about tourism, but there is a relationship between war and peace,” he said. “People have left Libya, Syria, Iraq and other countries for Europe. Why? It is because of war, color revolutions, and a want for change.”

Mr. Rainsy, the opposition leader, said by telephone after Mr. Hun Sen’s speech that a CNRP government would not summarily seize all land and hotels belonging to the rich and accused Mr. Hun Sen of twisting the opposition’s policies.

“It is a distortion—a funny distortion—of my conception of social justice. I have lived in a developed country where there are very rich people but there is a peaceful and voluntary system of income redistribution,” Mr. Rainsy said.

“Hun Sen has some extremist ideas that he cannot get rid of. People who have lived in developed countries…know that this has nothing to do with my interpretation of justice.”

Yet Mr. Rainsy said that land redistribution could occur were a CNRP government to set up a tribunal to investigate illegal land grabs by tycoons under Mr. Hun Sen’s rule.

“I am not going to say something as if I am the tribunal. The conception [of land reform] is totally different. Even when we lead the gov- ernment, we would leave this task to an independent tribunal independent of the executive,” he said.

“We cannot say beforehand that we would target this one or that one. We would leave it to the justice system.”

“I am telling you, before I become Qaddafi, you will have to die before me,” Mr. Hun Sen said to Mr. Rainsy.

Yet Mr. Rainsy said he was not threatened by his partner in the “culture of dialogue” saying that war would come in response to a future CNRP government’s efforts to find justice.

“We are reinforced in our will. There will be no war because there will be a broad national government, of people from all walks of life and tendencies. So we can assure the Cambodian people of the rule of law and social justice,” he said.

“Those who have not done anything wrong toward the nation and the people have nothing to fear.”