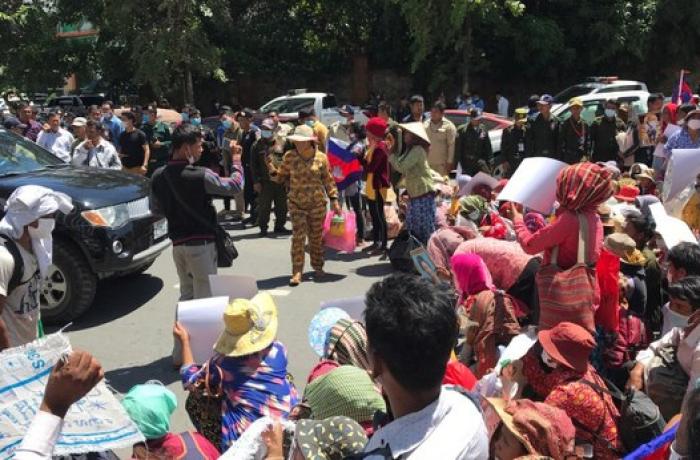 The protesters came from the provinces of Koh Kong, Svay Rieng and Tbong Khmum. They blocked the access road to the land ministry and asked (in vain) for a meeting with the authorities. Behind the expropriations are businessmen linked to the ruling party or Chinese and Indian companies.

About a thousand villagers from different provinces of Cambodia have gathered in Phnom Penh, blocking the road leading to the Land Ministry, to ask the government to resolve long-standing land disputes. They are arching against the (more or less legal) seizure of land by private companies or businessmen with important political ties and contacts.

Protesters from the provinces of Koh Kong, Svay Rieng and Tbong Khmum displayed placards and pictures with the faces of Prime Minister Hun Sen, his wife, King Sihamoni and the Queen Mother. They have appealed to the highest officials of the state in an attempt to settle the dispute. But their protest went unheard.

Yee Kunthea, representative of the coastal villagers of Koh Kong, reveals that his group has never received any compensation for land belonging to more than a thousand families and expropriated by a sugar cane company. The company belongs to Ly Yong Phat, senator of the ruling Cambodian People’s Party (CPP), a businessman connected to him and a Chinese company, the Union Development Group (Udg). The demonstrators wanted to speak to the minister, but were forcibly driven out.