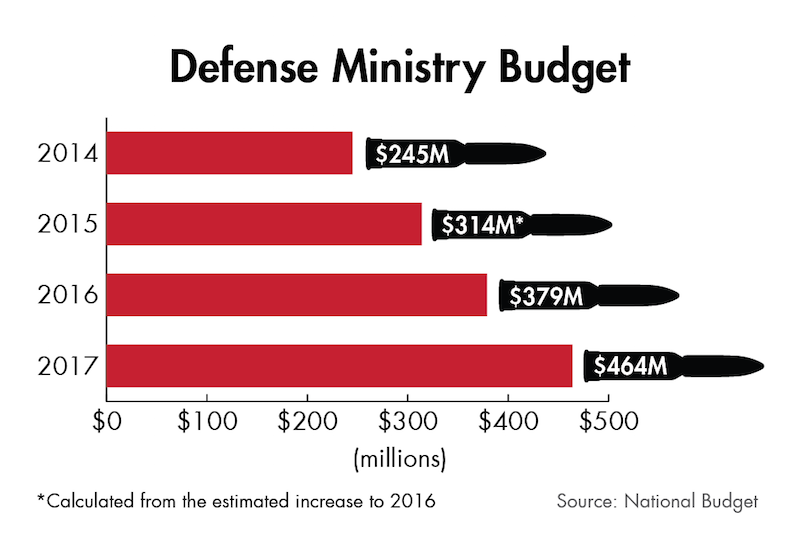 “We turned former battlefields into markets and developed areas,” he boasted in an October speech marking 20 years of peace in former Khmer Rouge stronghold of Pailin province.

Why, then, does the government continue to pour an ever-increasing amount of money into the military, with the Defense Ministry’s annual budget jumping from $75.7 million in 2006 to $464 million in next year?

“The spending doesn’t respond to the needs of priority sectors such as education and health, but the defense sector keeps increasing,” said CNRP lawmaker Son Chhay during Tuesday’s parliamentary debate on next year’s national budget.

The government says the increases are necessary to pay for ever-increasing pension and salary costs for military personnel. Analysts say that the CPP wants its most heavily armed constituency happy, and say that the move also buttresses border security with Thailand and discourages domestic threats.

“We don’t spend much on weaponry,” said Council of Ministers spokesman Phay Siphan. Instead, the funds go “mostly to salaries as well as to the social welfare of the soldier’s families.”

“It doesn’t mean that people retire and you pay them nothing,” he added.

Financing the military and police regularly consumed half of the national budget in the 1990s as the government sought to subdue the Khmer Rouge.

Spending started to taper off from the late 1990s until 2009 border skirmishes with Thailand over the Preah Vihear temple caused a spike in spending that has continued ever since, according to Paul Chambers, a professor of international relations at Chiang Mai University in Thailand, who focuses on civil-military relations in the region.

“Though one may think that 2011 marked the final year of major tensions with Thailand, the budget for defense and interior continued to rise,” he wrote in an email. “Hun Sen, despite displays of cooperation with the current military regime in Thailand, most assuredly does not fully trust it.”

Cambodia’s post-2009 military acquisitions—heavy on armored personnel carriers, tanks and light artillery—is in line with the kind of force that would be useful in light border skirmishes, according to Carl Thayer, a Southeast Asia expert at the Australian Defense Force Academy in Canberra.

“Cambodia would be able to surge to a particular area,” he said. “All of this would be hard to target by Thai artillery” in small-scale combat. Such forces might also be used “to crush an internal rebellion” or as a “show of strength” to a restive population.

But at the end of the day, if you’re a country with Cambodia’s small clout, “you can’t afford to play with the big boys. You try to get a country like China as a backer,” Mr. Thayer said.

With the bulk of its armaments being acquired from Beijing off-the-books, that process is already underway, according to Jon Grevatt, regional industry analyst at defense and security magazine IHS Jane’s.

“The reason Cambodia doesn’t spend much on procurement is that it gets most of its equipment from China,” he said.

Though “the details on that one are pretty sketchy,” the equipment was usually purchased with soft loans or outright gifts in a collaboration that also included training, logistics coordination and other technical support, he said.

With one of the smallest defense budgets in the region, Mr. Grevatt said it made sense that Cambodia spent more to catch up and keep its soldiers happy.

“There’s a school of thought that…military spending is an important part of the budget because it provides Hun Sen with the support of his military,” he said. “That’s not an unusual thing. We see that political leadership requires military support.”

Financial support to both upper- and lower-level forces might prove critical in upcoming elections, according to Mr. Chambers of Chiang Mai University.

“Most likely, this is necessary for the ruling party to make sure that in the 2018 election, security officials can be trusted to stand on the side of the CPP, regardless of the electoral outcome,” he said.

But Mr. Siphan rejected the idea that the government was currying favor with soldiers simply to prolong its stay in power.