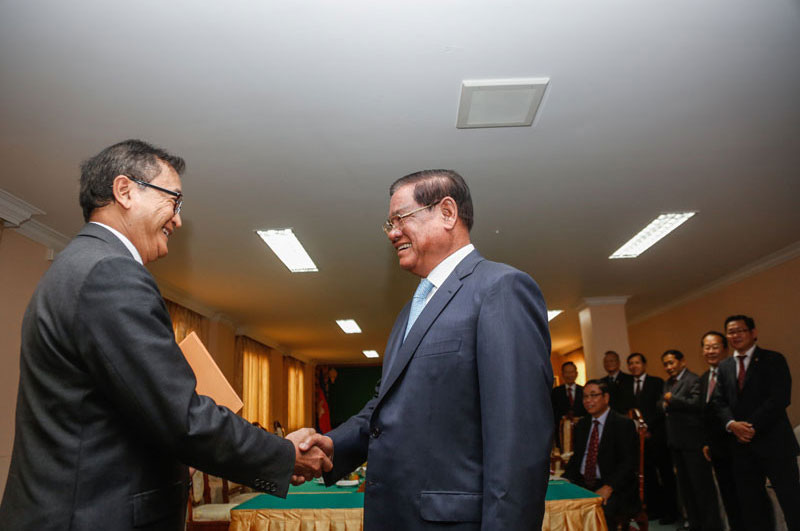 Following a deal struck to amend the election law on Saturday, the National Assembly will be expanded by two seats for the next national election, official campaign periods will be reduced from 30 days to 21, with four days for public rallies, and NGOs will be banned from “insulting” political parties during campaigns.

Meeting a self-imposed deadline to end talks by February 28, Interior Minister Sar Kheng and opposition leader Sam Rainsy emerged from a four-hour meeting at the National Assembly at about 8 p.m. Saturday announcing compromises on 10 remaining points of disagreement between the parties.

In a press conference that lasted only three minutes and offered no details about the deal, the two leaders said the law would soon be sent to the National Assembly to allow the new bipartisan National Election Committee (NEC) to be formed.

Mr. Kheng made brief remarks in support of Mr. Rainsy’s comments before the pair left without taking questions.

“I want to completely support what Excellency Sam Rainsy…has just said,” Mr. Kheng said. “Throughout this evening, the leaders of lawmakers from both parties have worked together with a spirit of responsibility and endeavored to compromise to resolve all the remaining issues.”

Working groups from both parties have been drafting amendments to the election law since last year, but left aside disagreements on issues such as voter identification and parliamentary seat counts for their leaders to discuss.

The new law is part of a series of reforms agreed to by Prime Minister Hun Sen in July to convince the CNRP to end its 10-month boycott of parliament.

The CNRP had said the 2013 election was rigged, but agreed that it would accept its seats if the NEC was reformed.

Mr. Rainsy said by telephone on Sunday that the CPP added five points for negotiation on Saturday, but that only Mr. Hun Sen’s recent proposal that parties who boycott parliament have their seats transferred to other parties was left unresolved, being put aside for further talks soon.

“Most of the remaining 15 points were resolved in a matter of minutes and there were only two or three stumbling points. The first one was the 1018 forms, which the CNRP considered the most important,” Mr. Rainsy said.

Commune councils issue the 1018 forms as proof of ID to registered voters who do not have national ID cards. The CNRP has accused the CPP, which controls almost every commune, of using them for voter fraud.

The opposition had been pushing for the system to be scrapped, but backed down on Saturday, allowing for near-identical forms to be used so long as officials from the new and reformed NEC are given oversight, Mr. Rainsy said.

“The procedures will now be different. Any voter who does not have his ID card will be issued an automatic document for voting purposes. It will be jointly issued by local authorities and representatives of the NEC: the CEC—the commune election committee,” he said.

Mr. Rainsy said the ruling party on Saturday also backed down on its decade-long refusal to increase the number of parliamentary seats in any province—but would only allow for an increase in a single province.

“Preah Sihanouk province will have three seats instead of one. This is the only exception that the CPP allowed,” Mr. Rainsy said. “At least we have achieved something symbolic.”

The CPP won the only seat in Preah Sihanouk province during the 2013 national election. If the results of that election were redistributed over three seats, however, the CPP would have won two seats and the CNRP one.

The official election campaign period will now also be reduced from 30 days to 21 days, with each provincial administration allowed to select four days within that period for parties to hold street marches, Mr. Rainsy said.

During the 21 days, civil society organizations will be banned from issuing statements or giving media interviews that insult parties—a proposal widely condemned by NGOs in past months but supported by both parties.

“‘Insulting’ will be a general provision, valid for everybody, including election candidates and party activists, saying you must campaign following ethics, you cannot insult, create turmoil or problems,” Mr. Rainsy said.

“It will be written into law: Civil society must be neutral, but on the other hand civil society has freedom of expression guaranteed, so they can defend themselves.”

Military, military police, court staff and civil servants will also be allowed to take part in campaigns so long as they do so outside of work hours, wear civilian clothes and do not intimidate other voters, Mr. Rainsy said.

CPP negotiators declined to comment on the talks. Koeut Rith, a Justice Ministry undersecretary of state who sat in on the meeting, said that the lead negotiators for the parties would meet on Monday.

Koul Panha, executive director of the Committee for Free and Fair Elections in Cambodia, slammed the requirement for NGOs to be “neutral” during campaigns when military officers and business tycoons will be allowed to participate.

“This is discrimination and a double standard to require NGOs to be absolutely neutral,” Mr. Panha said.

“They will allow the businesses and tycoons to take part in campaigns without limit, and even allow some of the media to do propaganda for the parties. What is the difference between these businesses and the NGOs?”

“They should also be more concerned about military, police and court officials—people who have a direct duty to carry out election security and election depute resolution—participating in election campaigns, not NGOs.”

Thun Saray, president of rights group Adhoc, said he was concerned the ban on “insulting” parties would be interpreted too broadly and that legitimate criticism would not be protected.

Mr. Saray also said the reduction in the campaign period to 21 days with only four days of rallies per province would make it hard for small parties to make their names known across the 24 provinces and Phnom Penh.

The amended law could be introduced to the parliament as early as this month, Mr. Rainsy said, despite Mr. Hun Sen saying he will spike the law if it does not include the provision to redistribute the seats of boycotting parties.

“There should be no boycotts if the election is fair. Why would there be protests? The very question may become irrelevant.”