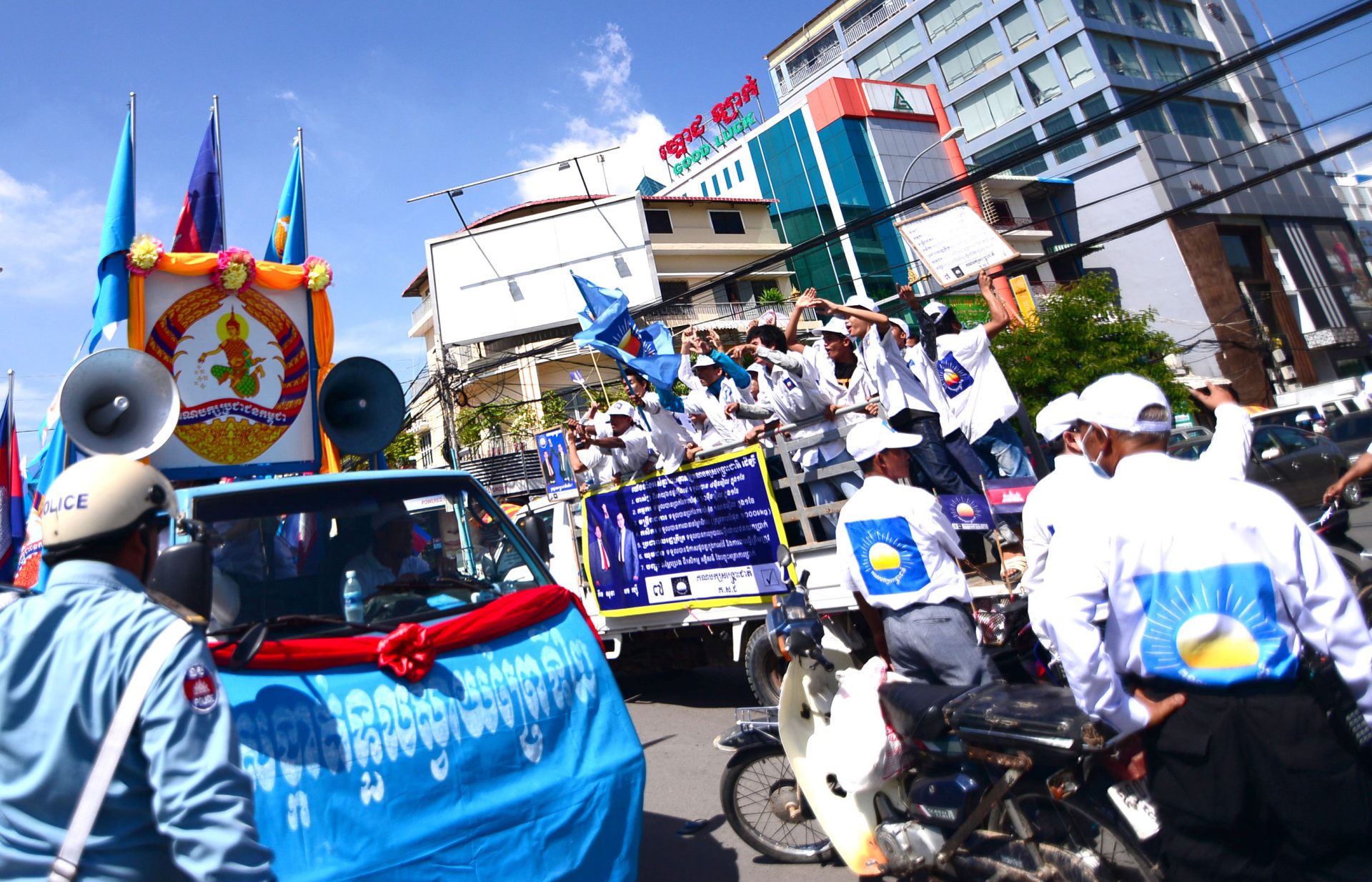 In a show of its far superior finances and penchant for pomp, the CPP on Thursday took to the streets in style to mark the official start of campaigning for next month’s national election with a massive outdoor rally on Phnom Penh’s Koh Pich before fanning out in the thousands across the city.

Behind a line of luxury cars sporting the party logo, it took nearly an hour for several hundred decked out trucks and motorbikes bearing the CPP faithful to file past a waving Prime Minister Hun Sen on the island and the rest of the party’s top brass. In between came party floats brimming with dancers, bands and enough speakers on each to drown out a dance club.

It was a much slicker affair than the far more modest beginning to the campaign season by the CPP’s main challenger, the Cambodia National Rescue Party (CNRP), which took place only a few kilometers away at Freedom Park. While not wanting for spirit, the parade made do with a few ad-hoc rock bands and a sprinkling of rusty trucks mounted with loudspeakers.

Back at Koh Pich, the CPP campaign rally doubled as the 62nd anniversary of the ruling party’s founding.

With its power base firmly es­tablished in the provinces, the ruling party is almost certain to hold on to power after the July 28 election. It now controls a comfortable 90 of the National Assembly’s 123 seats. But the CPP will surely be trying to add to its gains in Phnom Penh, typically its toughest constituency. The CPP won five of the city’s 12 parliamentary seats in the 2003 national elections and seven in 2008.

In prepared remarks, Mr. Samrin methodically recounted the party’s familiar themes from the past few weeks: the promise of more economic growth if they win and a descent back into chaos if they lose.

“This fifth general election on July 28, 2013, is a historic event crucial to the country and the nation,” he said. “It will determine the future of the nation and the people. The right decision will bring continued victories. The wrong decision will lead us backward and bring the country great danger.”

Over the past month, the CPP has warned of nothing short of civil war should Mr. Hun Sen’s unbroken, 28-year hold over the country come to an end.

Mr. Samrin praised the party’s work over the past five years, which enabled the country to weather the global financial crisis, recover from typhoon Ketsana and fend off a Thai “invasion.”

“Peace, stability, security and social order have been maintained,” he said. “The economy has emerged quickly from the global crisis and is getting stronger. Big buildings, special economic zones, schools, hospitals and development institutions have been built and are spreading everywhere to all communes.”

Among the crowd, the CPP had distributed paraphernalia including songbooks, fans and plastic clappers for those in the front rows.

But for all the props and the latest Khmer pop tunes streaming from the speakers, the 20,000-strong crowd looked largely unengaged.

Sin Rothna, a 19-year-old student at the National University of Management, said he was told to attend the rally by school staff. Mr. Rothna said he backed the CPP for its success developing the country’s infrastructure and predicted an easy victory.

“Now we have roads, bridges and everything,” he said, pointing around him at Koh Pich, an island that has become home to an ever-growing number of giant convention halls and upscale apartment blocks.

It was a far cry from the scene at Freedom Park where the CNRP and its 8,000 or so supporters were holding their rally at the same time.

The result of a fraught merger only a year ago between Kem Sokha’s Human Rights Party and the Sam Rainsy Party, named after its self-exiled founder who is overseas to avoid a lengthy prison sentence for a raft of dubiously founded convictions, the CNRP is the undisputed underdog in this race.

A flatbed truck with a raised stage and a few speakers powered by a generator was set up at the park for a speech by Mr. Sokha, who has been filling in as party leader for CNRP president Mr. Rainsy. But without Mr. Sokha about and the crowd growing restless, party organizers decided to get their own mo­torcade on its way.

Scores of motorbikes and some 200 trucks—plastered with banners showing onetime rivals Mr. Sokha and Mr. Rainsy clasping hands—headed down Street 108 before Mr. Sokha caught up with them about a half hour later and joined the lead.

By this point, thousands more had joined the parade of jubilant—mostly young—supporters, who were yelling party slogans in unison. Spilling out of rickety trucks, the CNRP supporters would sometimes jeer at CPP supporters as the two parades crossed paths on Phnom Penh’s streets.

After pulling over on Street 271 to let a CPP rally pass, the CNRP motorcade made an impromptu stop in front of Damkor market so Mr. Sokha could finally deliver his keynote speech.

For all the country’s economic growth over the past decade, the opposition has long complained that the growth has not been fairly shared, with a wealthy and well-connected political and business elite entrenched at the top and most Cambodians continuing to languish in poverty.

Mr. Sokha dismissed the CPP’s warning of catastrophe should they lose the election, and said the time had come for a new order, promising to eradicate the country’s rampant corruption and laying out a populist platform of higher wages, lower consumer prices and free education and health care.

“Please, all supporters advocate to struggle for change on July 28,” he said.

Party supporter Kim Bunthang said he was sure that hunger for change would finally break the CPP’s stranglehold on power and that a newly unified opposition would be the thing to do it.

Eighty-one-year-old Phally Seng, a long-time Sam Rainsy supporter, was heartened by the opposition’s revamped platform and the many young faces in the CNRP crowd.

“Now the country only belongs to one person: Hun Sen. We need change,” he said. “The opposition is very strong this year because we are together and there is a seven-point platform.”

Though Thursday marked the official start of the campaign, both parties have effectively been on the proverbial trail for weeks with ever more mud slinging, mostly from the CPP. With Mr. Rainsy circling Cambodia but not daring to enter, Mr. Sokha himself now faces four lawsuits either filed or threatened for everything from denying genocide to having his security guards attack the mother of a supposedly spurned mistress, both of which he denies.

But Thursday’s campaigning stayed mostly cordial and held to an exchange of only good-natured jeering.

The Ministry of Interior was also supposed to be enforcing a new ban on campaigning along the city’s main thoroughfares and its main parks and markets.

But police paid no heed to the rule Thursday as campaign trucks plied the roads. Police even redirected traffic to let CPP and CNRP members alike take over parts of Wat Phnom for a lunchtime break.

Propping up a CPP flag near the base of the stone steps leading up to the temple, Suy Channavy vowed to keep the campaign going.

“I’ll convince the people in my village to vote CPP,” she said. “With the CPP you have schools, hospitals, bridges, education and everything. If they need me to help every day, I don’t mind.”

During his own lunchtime stop at Wat Phnom, Mr. Sokha offered up a prayer. He asked that voters be freed from any pledges of support they may have made to other parties in exchange for pre-election gifts, a veiled slap at the CPP.

Out-funded, out-organized and marginalized by a local media largely beholden to the ruling party, it was a prayer the opposition may well need.

Previous articleFor Fringe Party, a Zen-Like Focus on Not Winning
Next articleGovernment Accuses EU of Interference Over Election Remark