In the 2012 commune elections, all but one of the province’s 50 communes went to the ruling party, almost all by a landslide. All but Pate. Of the 581 ballots its voters cast that year, the Sam Rainsy Party—led at the time by former Finance Minister-turned-staunch government critic Sam Rainsy—won 57 percent. In a sea of CPP support, tiny Pate is a lonely island of opposition.

The CPP is working hard to change that.

With this year’s June 4 commune elections just around the corner, the party of long-ruling Prime Minister Hun Sen is hoping to leave little to chance in Pate. Local CPP officials keep a close eye on outsiders asking awkward questions. They warn voters that a CPP loss will literally plunge their villages into darkness. And in a twist that shocked many, the well-known provincial coordinator of rights group Adhoc, Chhay Thy—a longtime government critic himself—left the NGO in January for a spot on the CPP’s Pate ticket.

The man who replaced him at Adhoc, Den Khornny, thinks the tactics just might work.

He also thinks the CNRP, formed soon after the 2012 elections when the SRP merged with the smaller Human Rights Party, has done itself no favors by leaving the SRP’s three incumbent council members, including the chief, off its own party ticket this year.

He also thinks Mr. Thy, his predecessor, could prove a popular draw for the CPP.

That assumes they know he’s running, and that they know who he even is. Neither is a given.

A few kilometers south of National Road 78, which runs past the top of Pate’s sliver of Ratanakkiri on its winding way to the Vietnam border, Mom Savoeun said he had no idea Mr. Thy was running.

“We are busy farming, so we don’t have time to get information,” said the 53-year-old cassava farmer, who owns neither a television nor a radio.

And that’s taking account of the fact that he sometimes works for Mr. Thy, plowing the candidate’s cassava field for extra cash when he’s not busy plowing his own. It’s also a reminder of just how remote and rural Pate is. Many of the indigenous ethnic minority Jarai, who make up most of the commune and have their own language, and speak little or no Khmer. The paving of Road 78 seven years ago has cut the drive from Banlung down to about an hour. But even now, each village seems to know little about what the others are up to. 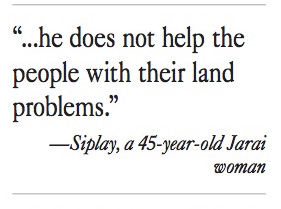 Mr. Savoeun, a soft-spoken man with a wrestler’s build, moved his family here from Kandal province three years ago looking for a better life. He said he’s found it.

“In Kandal there are only factories, and we are old so they did not let us work. Here there are more jobs,” he said. “We are better here.”

Mr. Savoeun has registered to vote in Pate, but has yet to decide who he’ll cast his ballot for.

On the one hand, he said he would vote “for whoever knows how to bring peace to the country, for whoever will develop the country,” an echo of the CPP’s perennial combination platform of peace and development. On the other, he echoed the CNRP’s trademark call for change.

But mostly Mr. Savoeun is cynical.

Thim, 32, who goes by one name, said he had never heard of Mr. Thy, but was still leaning toward a vote for the CPP because of his affection for the prime minister.

“He kicked out the Khmer Rouge and brought peace to the people,” he said, recalling Mr. Hun Sen’s part in the rebel force of Khmer Rouge defectors who, with Vietnam’s help, drove the regime from power in 1979.

Like most of Pate’s voters, Mr. Thim is Jarai, one of Ratanakkiri’s patchwork of indigenous ethnic minorities. Loyalty to the CPP runs deep among Jarai, part of the reason the ruling party dominates the province.

“The Khmer Rouge tried to kill the people, but [the people] survived. Since then the people like him,” said Seav Len, a 35-year-old Jarai man. “People support the CPP because they liberated the country.”

Mr. Hun Sen hardly misses a chance to remind them, often warning of civil war and a collapse of government services should the CPP ever lose.

“He said Hun Sen built everything for the villagers here, like roads and schools, and please, all of you vote for the CPP because all of you were liberated by Hun Sen, and if the CPP does not win there will be no more electricity here,” he said.

Mr. Hos said he doubted the last claim but was still behind the party.

Like most of Pate’s voters. Mr. Hos and his son were baffled by Pate’s lone swing to the opposition in 2012.

An interview with SRP commune chief Romam Yuot, one of the three men left off the CNRP’s ticket this year, was abruptly terminated when it was asked.

At first, Mr. Yuot claimed that he had asked to be taken off the ticket, but soon conceded that he was pushed when presented with his comments in a prior interview with the Daily.

“I don’t know how to communicate with the local people; that’s why they fired me,” he said. “I am not angry. Now I am a normal person. I am happy they removed me.”

The commune chief had come to the interview with another man, Sev Born. When reporters asked Mr. Yuot why he thought Pate was the only Ratanakkiri commune the CPP could not win in 2012, Mr. Born said the interview was over. Mr. Born said he had no official position, but was sent to accompany the commune chief by the provincial governor, Thong Savorn, the nephew of Mr. Lam, the CPP lawmaker, and son of Bou Thong, a CPP senator.

“They sent me with him to listen, and if the talk involves politics I am required to stop the interview,” he said.

With that, Mr. Yuot said he had just received a call requiring his immediate attention and left.

Later that afternoon, Mr. Yuot, Mr. Born and a third man named Rocham Yi filed a complaint with the district governor, who passed it on to the commune election committee, accusing the reporters of coming with “bad intentions” and “incited the people.”

There is little to obviously set Pate apart from its neighbors. It is a scattering of small, rural hamlets of mostly indigenous minority families making a hard living off the land. Neither is it unique for the illegal logging and land disputes with rubber plantations that afflict much of the province’s east.

But some say the SRP was able to capitalize on growing frustration here with both. Pate is also home to a particularly high-profile and long-running land dispute with a plantation owned by Keat Kolney, the sister of former Deputy Prime Minister Keat Chhon, who retired last year.

One young Jarai voter, who declined to give his name for fear of running afoul of the authorities, chalked up the SRP’s 2012 win to the logging and land grabs.

“The CPP has the power, but even though the people were logging and transporting timber they never stopped them; they let them do the crime,” he said. “The authorities always come when they grab the land from the villagers; they don’t try to solve the problem.”

The young man said he would be voting for the CNRP and that his neighbors were likely to do the same. Though jarred by the party’s choice to abandon its incumbent commune chief and councilors, he said they were putting party over politicians. And while they would not be peeled away by Mr. Thy’s addition to the CPP ticket, he did worry the opposition could lose some votes to the former Adhoc advocate in his home village of Kong Yu.

Most of the villagers in Kong Yu who were willing to talk said their votes were for the CPP.

Rocham Yik, 28, said he had yet to make up his mind but was full of praise for Mr. Thy, his next-door neighbor. It could not be confirmed if Rocham Yik and Rocham Yi, who joined the complaint against the reporters and is also 28, were the same person.

“This time Chhay Thy is a CPP candidate, so maybe I will vote for him,” he said. “He is educated and has helped the people a lot…. People need schools and wells and toilets, and Chhay Thy always helps them.”

Mr. Yik is also one of the dozens embroiled in the land dispute with Ms. Kolney, which has yet to be resolved. He blamed the courts for dragging their feet, but not the government that runs them.

He put the blame for logging and land grabs on Pate’s SRP commune chief and councilors.

Contacted later by phone, SRP senator and acting president Teav Vannol, who also heads the CNRP’s Ratanakkiri working group, conceded that the party left the three men off its Pate ticket because many villagers complained they weren’t working hard enough to solve their land disputes. It was also no help that the SRP commune chief actually elected in 2012, Seav Nhang, the man Mr. Yuot later stepped in for, was handed jail time for timber trafficking soon after taking office.

But Mr. Vannol said he still believed the CNRP’s brand was strong enough to give the party a fighting chance of holding on to Pate. He was also hoping the party’s recent decision to give Mr. Yuot a job on the CNRP’s district council would appease those upset by his absence from the commune ticket.

Besides, this year’s commune elections in Ratanakkiri are not only about Pate. The opposition lost next-door Yatung commune to the CPP by just 13 votes in 2012. And unlike five years ago, when the SRP contested only 38 communes and the HRP none, the CNRP is now competing in all 50.

Even if the opposition loses Pate, Mr. Vannol thinks it can win a few others.

If it is to hold on to Pate, it will need voters like Siplay.

The 45-year-old Jarai woman said she was leaving the CPP for the CNRP this year.

“Last time I voted for the CPP because Hun Sen liberated Cambodia, but I have changed my mind and this time I will vote for the CNRP,” she said. “I have changed my mind…because Samdech [Hun Sen], when we had a problem with the land and the company grabbed our 400 hectares, Samdech did not help us.”

Ms. Siplay was not convinced the CNRP could do better, but said the prime minister’s promises of more roads and schools was wearing thin.

“Hun Sen helps build roads,” she said. “But he does not help the people with their land problems.”