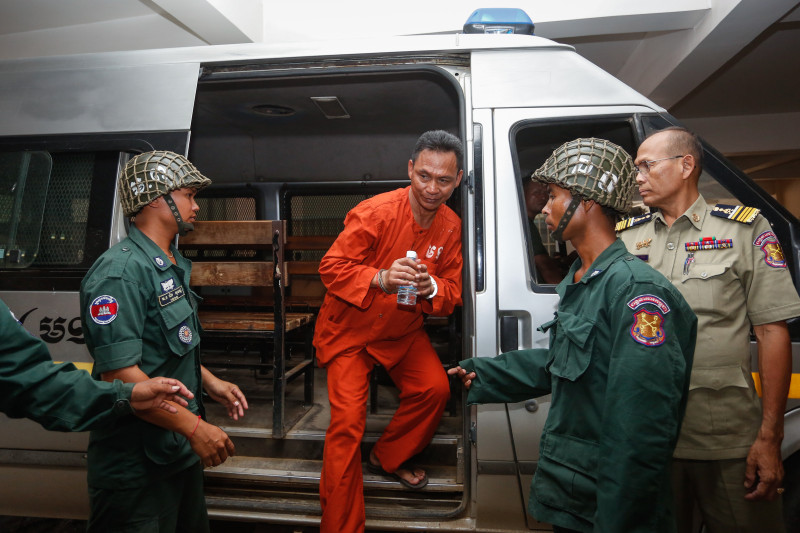 Pech Prum Mony, the former bodyguard of ousted Phnom Penh Municipal Court director Ang Mealaktei, told the court on Friday that his boss had ordered him to “go undercover” to collect information related to a high-profile murder in November.

The bodyguard, a brigadier general in the Cambodian army, was arrested in February and charged with unlawful interference in the discharge of public functions shortly after Mr. Mealaktei was removed amid allegations that officials at the court had taken a multi-million-dollar bribe to release the parents of Thong Sarath, a Defense Ministry official who stands charged with the murder of businessman Ung Meng Chue.

During the first day of his trial on Friday, Brigadier General Prum Mony, who is not authorized to investigate criminal cases, told the court that he had helped search the parents’ house and been ordered to infiltrate the family in the hope of locating Major General Sarath, who was on the run at the time.

Deputy prosecutor Ly Sophana asked the defendant why he had been seen at the home of Maj. Gen. Sarath’s parents, who were arrested after searches of the family’s villas turned up illegal weapons.

“I drove the car for the ex-director [Mr. Mealaktei] to take him there, and when I arrived, the Phnom Penh deputy police chief [Chuon Narin] called me inside,” Brig. Gen. Prum Mony said, adding that they had driven to the house to look for clues to the whereabouts of Maj. Gen. Sarath.

Brig. Gen. Prum Mony said his boss had “ordered him to review video clips, help to search [the house] and become close with Tep Thida in order to gather information about Thong Sarath,” he said, referring to Maj. Gen. Sarath’s wife.

“After we searched the house, he ordered me to go undercover and get close to Thong Sarath’s family.”
Asked if he could present a “mission letter” stating as much, Brig. Gen. Prum Mony said he had been acting on “verbal orders.”

“At that time, I asked senior minister Om Yentieng whether should I go and search,” he said. “He ordered me to search.”

Mr. Yentieng is the head of the government’s Anti-Corruption Unit.

Brig. Gen. Prum Mony said Mr. Mealaktei had brought him to Phnom Penh from Preah Vihear province in early 2014 to be a driver and handle security at the municipal courthouse at a time when “there were many demonstrations around the court.”

“He ordered me to collect information, especially related to groups that betray the nation,” he added.

Asked to justify the roles he had assumed, the defendant said only that he had never used his position to threaten or take money from judges, prosecutors or clerks.

“I came to the city like a forest person,” he said. “I only followed orders.”