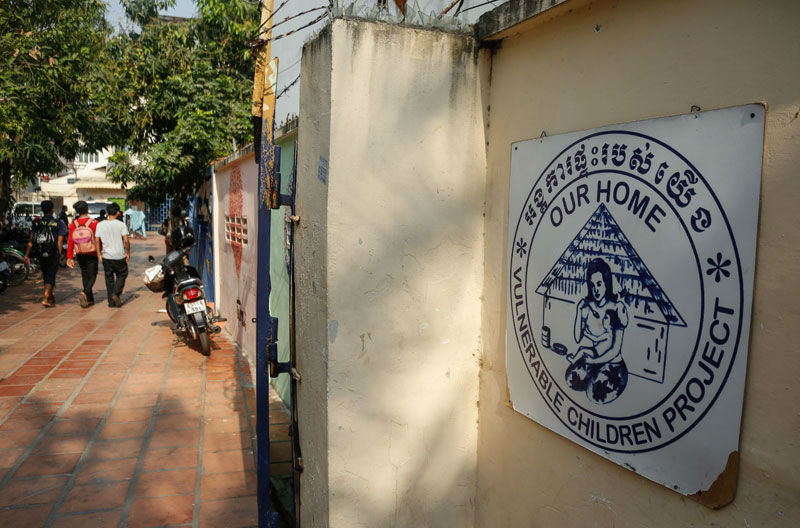 The former chief of anti-pedophile NGO Action Pour Les Enfants (APLE), who was jailed Friday by the Phnom Penh Municipal Court on charges of indecently assaulting children, claimed the allegations were fabricated by APLE founder Thierry Darnaudet as revenge for reporting his ex-boss to authorities over similar allegations in 2013.

Hang Vibol was APLE’s first director in 2003 but left the organization he helped set up alongside Mr. Darnaudet two years later to work exclusively as head of the Our Home orphanage and school in Meanchey district, where he was arrested on Wednesday afternoon.

“The Phnom Penh Municipal Court charged him with indecent assault based on articles 246, 247, and 248 of the criminal law [as] he committed indecent assault against many children,” said deputy municipal prosecutor Kol Bon on Friday, declining to comment further.

On Thursday, APLE released a statement acknowledging its role in the arrest and resulting relocation of more than 60 children at the orphanage, which was shut down on Thursday. The group said it had pursued its ex-director with the same vigor as any other suspected pedophile after being asked by the authorities to investigate Mr. Vibol.

But outside the courtroom yesterday, Mr. Vibol said Mr. Dar­nau­det was taking revenge on him after Mr. Vibol attempted to report the Frenchman to authorities two years ago for violent and sexual assault against children.

“Thierry Darnaudet was angry with me because I sent a report to the Ministry of Social Affairs and the Ministry of Interior in 2013 asking them to ban the APLE president from running an organization in Cambodia,” Mr. Vibol said.

“I knew his story—I knew he had committed child sex abuse in India and Cambodia,” Mr. Vibol said.
Mr. Vibol claimed that two disgruntled former senior staff members, who he had forced out of Our Home two years ago, had done Mr. Darnaudet’s bidding by filing false complaints and then manipulating innocent children into accusing him of sex crimes.

“I did not commit these crime against the children—I deplore child abuse,” said Mr. Vibol, who worked as a juvenile rights officer for local NGO Licadho in the 1990s.

“In the cases I am accused of, I was bathing them normally like any father would bathe a child, but Jean Marie Anno and Keo Piseth­dara twisted this,” he said, referring to his two former colleagues.

Mr. Pisethdara is the former executive director of Our Home and now runs Action for Rural Economic Development of Cam­bo­dia. Mr. Marie Anno is the vice president of D’Orleans Checy in Phnom Penh. The French-run NGO was a partner of Our Home, rebranded in 2011 from Our Home International, but the relationship soured in 2013 over a dispute, according to its website. Mr. Mario Anno also worked for APLE during Mr. Vibol’s tenure.

Mr. Vibol’s legal team—Suy Sokhon and Huy Phap—said on Friday that Mr. Darnaudet tried to force their client to forge documents accounting for $450,000 from the Spanish NGO Global Humanitaria after an attack on a child at a separate NGO Mr. Darnaudet operated in India. But Mr. Vibol had refused.

Mr. Darnaudet could not be reached Friday.

Samleang Seila, APLE’s current director, said there was no meaningful link between APLE and the allegations, as his NGO came on board only after the Ministry of Social Affairs requested its help.

Mr. Seila said he could not talk about the individuals mentioned by Mr. Vibol, as they were not mentioned as part of the investigation.

“Mr. Vibol, however, is in total denial of what he did, despite the huge amount of evidence against him,” he said. “But we will let the court find justice—if he is innocent, he is innocent. If he is guilty, he should be held legally accountable for what he did to the children.”

The original complaints, he said, were made by NGOs Friends International and First Step Cambodia, with police conducting their own investigation after they carried out preliminary interviews with children.

Mr. Seila did confirm, however, that Mr. Vibol filed a report with the government and that Mr. Darnaudet had flown from India to Cambodia in 2013 to defend himself against the accusations in front of representatives of the Interior Ministry, the Social Affairs Ministry and the Foreign Affairs Ministry.

“I can comment on this because I was there. Mr. Thierry came to Cambodia and met with the ministries and walked away having convinced them that the allegations were false,” he said.

However, Mr. Seila said Mr. Darnaudet had subsequently filed a defamation suit against Mr. Vibol, which had not yet been resolved, causing the renewal of APLE’s MoU with the government to be deferred.

Asked whether the accusations and counteraccusations should have been considered a conflict of interest, Mr. Seila said he did not.

“Technically, we are not in conflict. We are a local NGO now, run by me, and we have no connection at all now with any of these individuals. Thierry is not even on the board of directors or anywhere in the management structure,” he said.

First Step could not be contacted Friday. But Sebastian Marot, executive director of Friends International, said Mr. Seila’s account “was not quite how it happened.”

“We received a complaint by two private people but we have no proof or evidence. We just directed the complainants to the relevant ministries,” he said.

Licadho president Pung Chhiv Kek said she was shocked at hearing of Mr. Vibol’s arrest, as she remembered him as a very diligent young man who fought to protect children. But irrespective of his innocence or guilt, she said, the case was too serious for the investigation to involve an organization with such close connections to the suspect.

“This investigation should have been carried out by police and an independent group of NGOs who are in no way involved,” she said. “I hope it was carried out correctly and that he will receive a fair trial so that it is proved beyond doubt if he did wrong.”