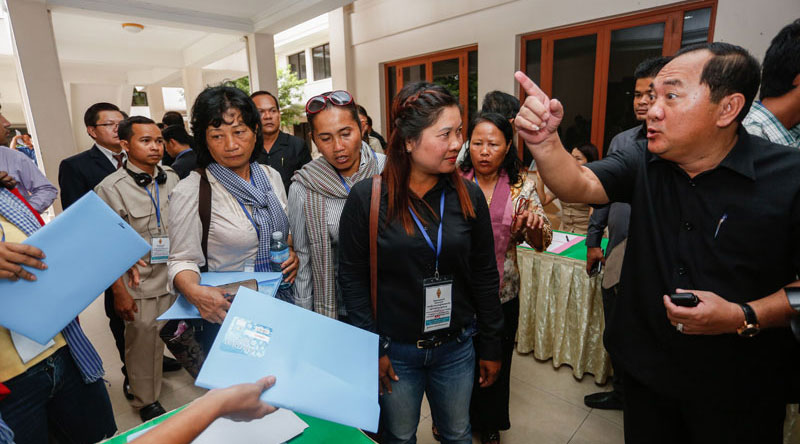 CPP lawmakers and officials continued to defend their controversial draft of a proposed law aiming to regulate the country’s non-government groups at a workshop at the National Assembly on Wednesday, despite a boycott from some NGOs and the opposition, which dismissed the event as “rubbish.”

The CPP hosted the workshop to gather input on the proposed law, which NGOs fear the government will use to muzzle its critics, ahead of an imminent vote. But just as the event was getting underway, CNRP lawmakers in the audience walked out in protest.

“We boycott because the workshop is just rubbish,” opposition lawmaker Son Chhay said afterward. “It’s not the kind of meeting that would allow the people to participate…. It’s just a meeting, a play. It’s not going to provide a chance to change the law.”

The CNRP was denied a role in running the workshop by the National Assembly’s permanent committee when it decided not to have the draft reviewed by any of the Assembly’s commissions chaired by the opposition. The CNRP has called for more time to debate the law, which has drawn criticism from hundreds of NGOs, as well as the U.N., U.S. and European Union (E.U.).

“How can you do it in just one morning?” Mr. Chhay asked.

Prime Minister Hun Sen has personally pushed for the law as a necessary barrier against the risk of terrorist groups using NGOs to sneak funds into the country.

The government says it merely wants NGOs to be as transparent as itself.

The government regularly receives low marks on its own transparency in global rankings, however. And ironically, Transparency International was left off the invitation-only guest list for Wednesday’s workshop. The group’s country director, Preap Kol, said he was not invited, not allowed to register, and turned away when he showed up at the National Assembly on Wednesday morning.

Some of the government’s loudest critics, including rights groups Adhoc and Licadho, stayed away by choice. Like the CNRP, they called the CPP’s eleventh-hour call for public input disingenuous.

Inside the National Assembly on Wednesday, CPP lawmaker Chheang Vun ran the carefully choreographed workshop by calling on a list of groups that had submitted their questions and comments in advance. For an hour, they had three minutes each to ask their questions or make their point.

The list included critics of the law but was skewed slightly in favor of its boosters, including a number of youth organizations.

Among those allowed to speak was Chea Chheng, a student at the Royal University of Law and Economics affiliated with the Union of Youth Federations of Cambodia, which is aligned with the CPP and headed by Mr. Hun Sen’s son Hun Many, himself a CPP lawmaker.

Mr. Chheng urged lawmakers to pass the law and complained about NGOs that demonstrate against government policies and practices while taking donations from abroad.

Lay Sovan, of the Pagoda Boys, Students and Intellectuals Association, said the law would prove a useful tool against the likes of Somaly Mam, the disgraced NGO director who fabricated parts of her past—and coached young girls in her charge to do the same—to attract donor dollars.

“They take their own benefit by exploiting the victims,” Mr. Sovan said, calling on lawmakers to make the law even tougher by adding stiff penalties for NGO corruption.

Critics say the law would violate their constitutional right to the freedom of assembly. They fear the government will use vague rules about staying politically “neutral” and respecting Cambodian “tradition” to shut down its critics, or prevent them from registering.

The U.N. and the U.S. have urged the government to reconsider its need for the law. At Wednesday’s workshop, the E.U.’s acting charge d’affaires, Alain Vandersmissen, joined them.

He said the E.U. appreciated the government’s worries about security breaches.

“However, after careful analysis of the draft before us, we have concluded that few of its stipulations can justify their present wording with regard to legitimate security concerns,” he said. “It seems to us that the balance between these legitimate concerns on the one hand and the constitutional rights of the members of civil society on the other hand is not right.”

Mr. Vandersmissen said the criminal code already covered the government’s security concerns, and urged the lawmakers to spend more time drafting the law. The law was an opportunity to protect NGOs, he said, “but in its present form, the law will stifle that work, to the detriment of Cambodia.”

For a brief moment, the stage-managed proceedings were derailed by a pair of women from Phnom Penh’s Boeng Kak neighborhood, where thousands of families have been forced out of their homes to make way for a CPP senator’s high-end real estate project. The families have drawn support from rights groups at home and abroad.

Chray Nim, one of the women, was not on Mr. Vun’s list and hijacked the microphone to tell him that the NGO law threatened to stifle that support.

“The NGOs help us,” she said. “In Cambodia, if we do not have the NGOs’ help…the people will not see the suffering.”

Mr. Vun gave Ms. Nim a few minutes to speak and said he would take her remarks “into consideration.”

But Mr. Vun and the government officials by his side remained unswayed by the draft’s staunchest critics, who want the law scrapped altogether.

Pol Lim, a secretary of state at the Ministry of Interior, said the country needed the law because some NGOs were acting beyond their mandates, and because there were simply so many—the government says there are more than 5,000, but NGOs say only about a fifth of those are active.

Mr. Lim said the drafters had carefully studied NGO laws in nine other countries and that the version they had come up with was more lenient than some, because it would still allow non-government groups to keep their foreign donors.

As for fears that the government would misuse its power under the law to decide who or what posed a threat to “public security” or to Cambodian “tradition,” he said they could rest assured that “experts” were on hand to vet the risks.

NGOs are also worried that the law would apply to the thousands of grassroots community groups around the country that would struggle to meet registration and reporting requirements. Sak Setha, another secretary of state at the Interior Ministry, said they would be spared.

Tentative plans to put the draft to a vote on Friday have been dropped. Mr. Vun said a new date had yet to be set.