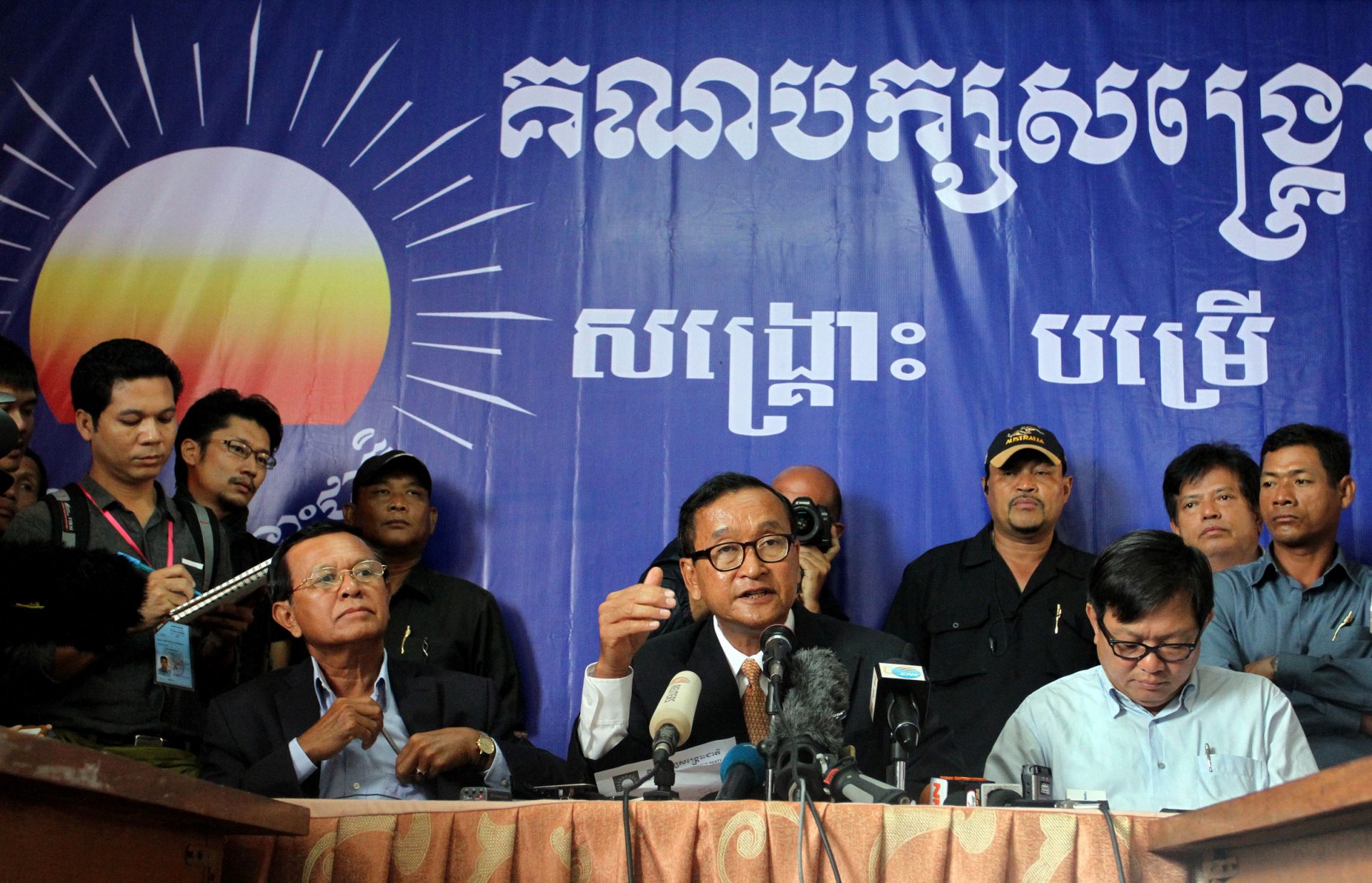 Cambodia National Rescue Party (CNRP) president Sam Rainsy said Monday that the opposition has rejected the results of Sunday’s election, and called for an independent investigation of the vote to determine if a re-election is required.

“In one word we don’t accept the election results,” Mr. Rainsy told a press conference in Phnom Penh.

“There are too many irregularities.”

Mr. Rainsy said that an independent committee should be established consisting of members of the opposition and the ruling party, as well as the U.N., representatives of foreign governments and NGOs.

Depending on the committee’s findings, the CNRP may call for a complete revote, he said.

“In order to solve [this], we call for the establishment of a political committee with both parties, NGOs…and we ask friendly countries to send experts to be part of this joint committee to assess all the irregularities of the results,” Mr. Rainsy said.

“We are interested to render justice to the Cambodian people,” he added.

“We are taking a strong stance right now because it is more evident than ever that the people want change. So we cannot afford to joke, we must find justice for them,” Mr. Sokha said.

The opposition, he added, does not want instability in the country stemming from the rejection of the election result.

“I believe that the party that has power nowadays also wants stability. We both don’t want instability,” he said.

On Sunday, the opposition won 55 seats in the 123-seat National Assembly—a huge gain on the total of 29 seats won by Mr. Rainsy’s eponymously named party and the Human Rights Party in the last election in 2008. The Cambodian People’s Party (CPP) won 68 seats on Sunday, a significant drop from the 90 seats it took in 2008.

While the tone of the CNRP conference was calm but firm, government officials said Monday they had no intention of participating in the investigative committee proposed by Mr. Rainsy.

“This is impossible,” said Phay Siphan, spokesman for the Council of Ministers, when asked about setting up such a group to probe Sunday’s vote.

“I don’t think the political will to establish an organization…is possible,” Mr. Siphan said, noting that such a committee was also unnecessary, as the means to challenge election results already existed in the National Election Committee (NEC) and the Constitutional Council.

“The NEC have due process and there’s a constitutional court,” he said.

Critics have long accused the NEC and Constitutional Council of being under the influence of Prime Minister Hun Sen.

“This is not a legal way [of doing things], it’s just an excuse to get more seats,” Mr. Vun said of the CNRP’s call to investigate the results.

“If we followed Mr. Rainsy on this, we wouldn’t even need an election law,” he said.

“If we did not satisfy [with the electoral process], please file a complaint to the Constitutional Council,” he added.

“If the CNRP wrongly uses force, they will face the law.”

Mr. Siphan and Mr. Vun also said that the opposition’s gains Sunday were evidence of a strong democratic process.

Asked to comment on the CPP officials’ rejection of the committee proposal, CNRP spokesman Yim Sovann said it was absurd for the NEC and Constitutional Council to investigate the election irregularities.

“You can see that the CPP controls all the state institutions—the NEC, the Constitutional Council, the courts,” he said.

“If the NEC does not agree to reform, they will be the ones responsible for the consequences,” Mr. Sovann added without elaborating.

“The people are very angry with the [NEC] institution,” Mr. Sovann said. “It is me now asking them to calm down.”